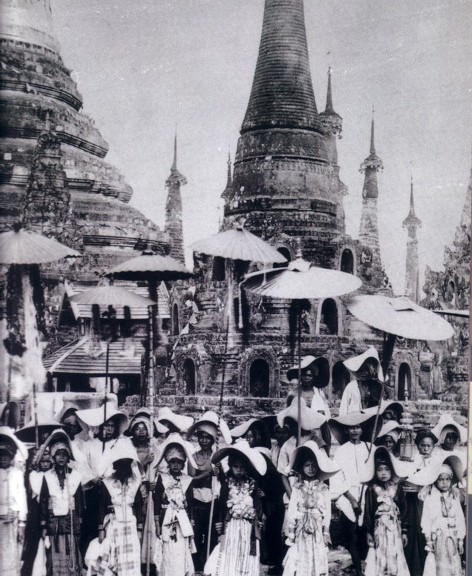 The Nation we know as Burma was first formed during the goldenage of Pagan in the 11th century. King Anawratha ascended the throne in 1044, uniting Burma under his monarchy. His belief in Buddhism lead him to begin building the temples and pagodas for which the city of Pagan (above) is renowned. Pagan became the first capital of a Burmese kingdom that included virtually all of modern Burma. The golden age of pagan reached its peak in during the reign of Anawratha’s successor,Kyanzitta (1084-1113), another devout Buddhist, under whom it aquired the name
” City of four million pagodas “.

Although Burma was at times divided into independent states, a series of monarchs attempted to establish their absolute rule, with varying degrees of success. Eventually, an expansionist British Government took advantage of Burma’s political instability. After three Anglo-Burmese wars over a period of 60 years, the British completed their colonization of the country in 1886, Burma was immediately annexed as a province of British India, and the British began to permeate the ancient Burmese culture with foreign elements. Burmese customs were often weakened by the imposition of British traditions.

The British also further divided the numerous ethnic minorities by favouring some groups, such as the Karen, for positions in the military and in local rural administrations. During the 1920s, the first protests by Burma’s intelligentsia and Buddhist monks were launched against British rule. By 1935, the Students Union at Rangoon University was at the forefront of what would evolve into an active and powerful movement for national independence. A young law student Aung San, executive-committee member and magazine editor for the Students Union, emerged as the potential new leader of the national movement. In the years that followed, he successfully organized a series of student strikes at the university, gaining the support of the nation.

At the outbreak of the Second World War, Aung San seized the opportunity to bring about Burmese independence. He and 29 others, known as the Thirty Comrades, left Burma to undergo military training in Japan. In 1941, they fought alongside the Japanese who invaded Burma. The Japanese promised Aung San that if the British were defeated, they would grant Burma her freedom. When it became clear that the Japanese would not follow through with their promise, Aung San quickly negotiated an agreement with the British to help them defeat the Japanese. Hailed as the architect of Burma’s new-found independence by the majority of Burmese, Aung San was able to negotiate an agreement in January 1947 with the British, under which Burma would be granted total independence from Britain. Although a controversial figure to some ethnic minorities, he also had regular meetings with ethnic leaders throughout Burma in an effort to create reconciliation and unity for all Burmese.

As the new leader drafted a constitution with his party’s ministers in July 1947, the course of Burmese history was dramatically and tragically altered. Aung San and members of his newly-formed cabinet were assasinated when an opposition group with machine guns burst into the room. A member of Aung San’s cabinet, U Nu, was delegated to fill the position suddenly left vacant by Aung San’s death. A Burma was finally granted independence on January 4, 1948, at 4:20am – a moment selected most auspicious by an astrologer.

For the next ten years, Burma’s fledging democratic government was continuously challenged by communist and ethnic groups who felt under-represented in the 1948 constitution. Periods of intense civil war destabilized the nation. Although the constitution declared that minority states could be granted some level of independence in ten years, their long-awaited day of autonomy never arrived. As the economy floundered, U Nu was removed from office in 1958 by a caretaker government led by General Ne Win, one of Aung San’s fellow thakins. In order to “restore law and order” to Burma, Ne Win took control of the whole country including the minority states, forcing them to remain under the jurisdiction of the central government. Although he allowed U Nu to be re-elected Prime Minister in 1960, two years later he staged a coup and solidified his position as Burma’s military dictator.

Burma Under a Dictatorship

and ethnic-minority rebel groups. The country was closed off from the outside world as the new despot promoted an isolation ideology based on what he called the Burmese Way to Socialism. Superstitious, xenophobic and ruthless, for the next three decades Ne Win set a thriving nation on a disatrious path of cultural, environmental and economic ruin. Outside visitors were few and restricted to Rangoon, Mandalay and a handful of other tightly controlled towns close to the central plains. Insurgency remained endemic and in many areas of Burma armed struggle became a way of life.

The People’s Demands Are Met With Bullets

In July 1988 Ne Win suddenly announced that he was preparing to leave the stage. Seeing at last a possible escape from military rule, economic decline and routine human rights abuses, thousands of people took to the streets of Rangoon. Thousands of students and democracy advocates fled to the border regions under ethnic control and forged alliances with ethnic resistance movements. Some of these groups include the National Coalition Government of the Union of Burma (NCGUB), the All Burma Student Democratic Front, the Democratic Alliance of Burma, and the longstanding National Democratic Front situated in Manerplaw (the former headquarters of the Karen National Union which fell to SLORC in January 1995). Together these groups formed the National Council of the Union of Burma, an umbrella organization representing all the groups.A Leader Emerges

It just so happened that during this time of unrest in 1988, Aung San Suu Kyi, daughter of independence hero Aung San, who had been living abroad, returned to Burma to care for her ailing mother. Her devotion kept her there and brought her into the political foray. Attempting to quell international condemnation for its violence, the military announced it would hold multi-party elections. Under the persuasion of students and others opposed to the regime, Aung San Suu Kyi and like-minded colleagues founded the National League for Democracy (NLD). Her party quickly gathered country-wide support. Just when democratic changes seemed imminent Ne Win commandeered the army from behind the scenes to take over the country in a staged “coup”.

On September 18, 1988, control of the country was handed to a 19-member State Law and Order Restoration Council (SLORC) and a vicious crackdown followed. Although committed to non-violence, Aung San Suu Kyi was placed under house arrest in July 1989 for “endangering the state” and kept there for the next six years. Desperate to improve their image and generate foreign investment, the SLORC went ahead on May 27, 1990 and held the multi-party elections they had promised. Despite the SLORC’s severe repression against members of opposition parties (Aung San Suu Kyi was kept under house arrest) and the complete lack of freedom of expression throughout the country, Suu Kyi’s NLD party swept to victory with 82% of the vote. Surprised and outraged, the SLORC refused to acknowledge the election results and has retained its repressive grip on power ever since.

Eventhough Daw Aung San Suu Kyi was released from house arrest in May of 2002 the military has refused to relinquish power. The generals have not engaged in any sort of dialogue. The humanitarian situation in Burma is disasterous and civil war still ravages the border areas. The effect of military rule has been a severly impoverished and underdevelopmed nation, Burma has rated as the second least developed nation on the United Nations Development Index. Peace, democracy and the most basic human rights do not exist. Millions have been forced to flee due to military rule and are scattered all over the world longing for the day when they can return to their homeland and be re-united with the families and live in peace.