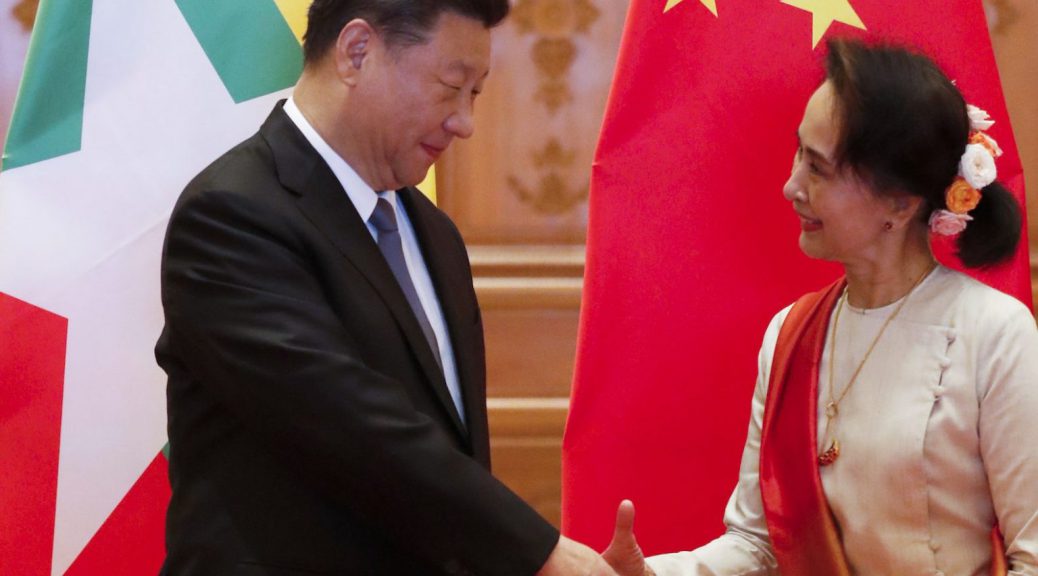 BANGKOK – As Myanmar enters an election season, the economy, Covid-19 and issues of war and peace are expected to dominate the campaign trail discourse.

But for the international community, speculation centers on which direction foreign policy will likely take after the poll: toward an even stronger and closer relationship with China or a shift towards a more independent posture.

Much has changed since the leaders in Beijing favored Myanmar’s authoritarian military regime and were deeply suspicious of then opposition leader and one-time pro-democracy icon Aung San Suu Kyi.

Now, Chinese government representatives have made no secret in recent private discussions that they would prefer to see Suu Kyi and her National League for Democracy (NLD) win and are wary of the generals, who they find it increasingly difficult to influence and control.

The military-aligned Union Solidarity and Development Party lost badly to the NLD at the 2015 election and it’s not clear it will fare much better at this November’s poll.

While Myanmar’s military sees it as their duty to defend the nation’s sovereignty and seek to lessen national dependence on China, Suu Kyi turned to Beijing for economic and other assistance after her previous allies and admirers in the West distanced themselves from her over the Rohingya refugee crisis.

Beginning in August 2017 and still ongoing, thousands of Rohingyas have been killed while hundreds of thousands have fled across the border into Bangladesh due to a Myanmar military crackdown.

Once seen as a champion of human rights, Suu Kyi refused to condemn the carnage the UN and others have termed as possible “genocide.” As such, Suu Kyi turned dramatically and almost overnight from darling to pariah of the West.

The third force in Myanmar’s topsy-turvy foreign relations is Japan, which sees the dangers of the region’s shifting geopolitics and thus has not joined the West’s condemnations.

From August 21 to 24, Japanese Foreign Minister Toshimitsu Motegi paid visits to Papua New Guinea, Cambodia, Laos and Myanmar to strengthen Tokyo’s presence in the four Southeast Asian countries. That his tour took place amid the pandemic underscores the importance of his mission: to counter China’s rising regional clout.

In Myanmar, Motegi met Suu Kyi as well as Senior General Min Aung Hlaing, the commander-in-chief of the armed forces. Motegi promised Suu Kyi technical assistance to contain the spread of Covid-19. They also agreed to better facilitate travel for businesspeople and students between the two countries.

In discussions with Min Aung Hlaing, Motegi pledged support for Myanmar’s peace process. A statement issued by Japan’s Foreign Ministry also stated rather curiously and without elaborating that Motegi and Min Aung Hlaing “exchanged views” on regional affairs, “including the South China Sea issue and concurred on deepening cooperation between the two countries.”

It remains to be seen whether Motegi’s promises to Suu Kyi will be enough to make a dent in Beijing’s already strong influence over Myanmar. That’s plain to see in the so-called China-Myanmar Economic Corridor (CMEC), a bilateral scheme that involves the construction of high-speed railways, highways and upgraded waterways along Myanmar’s rivers.

The project is seen as a crucial link in Chinese President Xi Jinping’s global infrastructure project, the Belt and Road Initiative (BRI), which arguably will take on more importance in neighboring Southeast Asia as tensions rise with the US in a new Cold War.

Myanmar’s link and outlet to the Indian Ocean will provide an alternative route for China’s trade with the Middle Eat, Africa and Europe, which currently travels via vulnerable sea lanes through the contested South China Sea and congested Malacca Strait.

During a historic visit to Myanmar in January, Xi secured no less than 33 memoranda of understanding, including 13 relating to infrastructure projects, in talks with Suu Kyi and other mostly civilian officials.

Those included a multi-billion dollar plan to establish a special economic zone and industrial park near Kyaukphyu, where a deep-sea port is already being developed with Chinese investment.

Min Aung Hlaing, on the other hand, stunned many observers when he said during a visit to Moscow in June in an interview with a Russian news network that “terrorist groups” exist in Myanmar “because of the strong forces that support them.”

Although the military leader did not name any group or foreign force in particular, it was clear that he was referring to the insurgent Arakan Army (AA) in the country’s western Rakhine state which is known to be equipped with Chinese-made weapons.

In November, the Myanmar military seized a huge cache of Chinese weapons, including brand-new rocket launchers and a surface-to-air missile, from another rebel army in northern Shan state.

China’s carrot and stick policy towards Myanmar consists of loans, grants and support for anti-Covid-19 campaigns on one hand while providing some of the country’s many ethnic armies access to China’s huge, informal arms market, which is grey rather than black.

Despite the Covid-19 crisis and numerous talks between government officials, military leaders and representatives of the country’s many ethnic armed organizations, Myanmar’s civil war is raging in several border areas and it has become increasingly clear that it is being heavily influenced by China.

Initiated by former president, ex-general Thein Sein shortly after he assumed office in March 2011 and continued under the present Suu Kyi administration, the peace process has attracted rich support from the West as well as Japan.

But a national ceasefire agreement (NCA) comprises only a handful of groups, some without arms or territory under their control. The most recent peace meeting was held this month and ended with nothing more than an agreement to hold further talks about talks.

The fact remains that groups representing more than 80% of all ethnic combatants have not signed the NCA and are unlikely to do so. Those groups, seven in all, are united under the umbrella of the Federal Political Negotiation and Consultative Committee (FPNCC). All are known to be close to China.

The most powerful of them, the United Wa State Army (UWSA), is equipped with Chinese-made assault rifles, machine-guns, mortars, surface-to-air missiles and even light armored personnel carriers and other military vehicles.

AA is a close ally and has via other FPNCC members received weapons from the UWSA. So, too, has the powerful Kachin Independence Army (KIA) in the far north of the country and the Ta’ang National Liberation Army, an ethnic Palaung group that operates over large swathes of territory in northern Shan state.

The West and Japan may be involved in the peace process, and Motegi may have pledged increased support for efforts to bring decades of civil war to an end. But Chinese security officials have in recent meetings with FPNCC members told them not to have any dealings with peacemakers and other officials from the West or Japan.

It is thus clear that China has no intention of giving up its big stick and that recent developments have exposed just how irrelevant other outside actors have become to the peace process.

While the West is caught in the quagmire of the Rohingya crisis and Japan is doing its utmost to maintain and develop ties with Myanmar, China still rules the roost. And that largely explains why China backs a continuation of the democratic status quo, with Suu Kyi and her NLD still in power after November’s election.