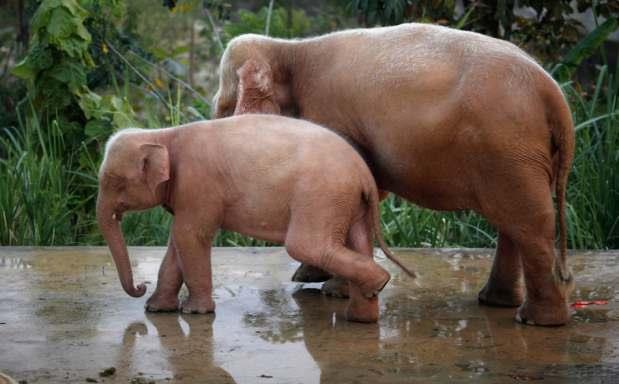 Kings and leaders in the predominantly Buddhist nation have traditionally treasured white elephants, whose rare appearances in the country are believed to herald good fortune, including power and political change. To the faithful, the existence of white elephants is a positive sign from above; others speculate it is the product of rampant deforestation. Uppatasanti Pagoda,“the Abode of Kings” in Naypyidaw, guarded by a high steel fence and an assault rifle-wielding police officer, is home to four perfectly pink adult pachyderms who munch on sugar cane and bamboo, pacing as far as the chains tethered to their right forelegs allow them, while a fifth, still a calf, frolics in a pen under its chained mother’s gaze. For centuries, Southeast Asian monarchs have coveted white elephants as embodiments of a divinely sanctified rule. “The white elephants represent peace and wealth,” elderly Buddhist monk U Ottama says in Yangon. “(They) are a sign of the good future awaiting our country.”

According to Dr. David Steinberg, professor of Asian Studies at Georgetown University, “governments have used them as portents of good things and they are regarded as signs of political legitimacy.” These animals’ lofty status originates in the ancient texts of Indic religions. Indra, lord of Hinduism’s diverse pantheon, rides a mighty multi-tusked white elephant in the 9th century BCE Mahabharata.

In the 1st century CE Buddhacharita, the Buddha’s mother dreams of a white elephant entering her womb on the eve of her son’s conception. In the 4th century BCE Jatakas, the Buddha appears as a supernatural white elephant in two of his past lives.

In the West, the term “white elephant” denotes a burdensome possession whose cost of maintenance exceeds its value. With their pinkish skin, white hairs and pale eyes, white elephants are likely albinos or leucistic, meaning they exhibit a uniform reduction of all pigmentation, rather than a complete absence of it. Incredibly rare, Southeast Asian kings seldom possessed more than one or two of the animals at a time. Some monarchs even waged wars to acquire them. Today, the Thai royal family possesses 10 white elephants — more than any in the kingdom’s history.

With Laos’ last white elephant dying in the ramshackle Ban Keun Zoo in 2010, Burma is now the only place where one can see these sacred animals. To the faithful, the existence of so many white elephants is a positive sign from above; others speculate it is a the product of rampant deforestation in the region. Since TheinSein came to power, two more white elephants have been found and one was born in captivity. Grand ceremonies marked each of these animals’ arrival to the capital, with officials declaring that they are “a good omen when the state is endeavoring to build a peaceful,modern and developed nation” and that their discovery has led to an “improvement in the country’s foreign relations.”