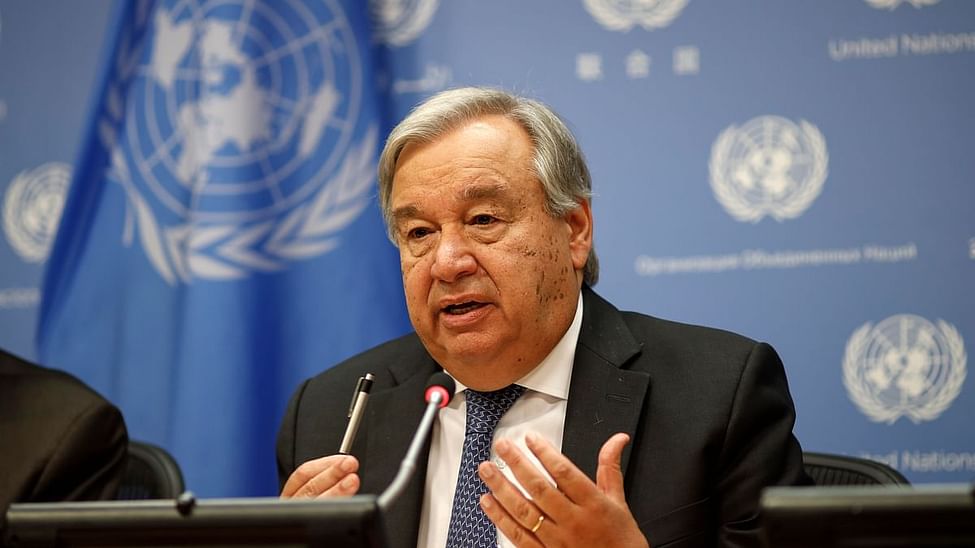 The UN chief’s urgent call for a united international and regional response indicates that with ASEAN’s slow movement, Guterres feels it is time for broader international action as well

The United Nations chief is urging unified regional and international action to prevent the crisis in Myanmar from becoming a large-scale conflict and multi-faceted catastrophe in the heart of Southeast Asia and beyond.

Secretary-General Antonio Guterres warned in a report to the U.N. General Assembly circulated Wednesday that the opportunity to prevent the army from entrenching its rule could be narrowing and said it is urgent that regional and international countries help put Myanmar back on the path to democratic reform.

When Myanmar’s army ousted the elected government of Aung San Suu Kyi on Feb. 1, it claimed with scant evidence that the general election her party won last November in a landslide was marred by widespread fraud. The takeover almost immediately sparked widespread street protests that security forces tried to crush. The pushback has left more than 1,100 people dead, according to U.N. High Commissioner for Human Rights Michelle Bachelet and right groups.

The United Nations has supported a five-point plan adopted by the 10-member Association of Southeast Asian Nations, which includes Myanmar, that calls for stopping violence, constructive dialogue, appointment of an ASEAN special envoy as mediator and humanitarian aid. It took until early August for ASEAN to pick Brunei’s Second Foreign Minister Erywan Yusof as their special envoy, and he is reportedly still negotiating with the military on the terms of a visit.

In the report, Guterres welcomed Yusof’s appointment, called for timely and comprehensive implementation of the five-point consensus to facilitate a peaceful solution, and strongly encouraged ASEAN to work with the U.N. special envoy.

His urgent call for a united international and regional response indicates that with ASEAN’s slow movement, Guterres feels it is time for broader international action as well.

The risk of a large-scale armed conflict requires a collective approach to prevent a multi-dimensional catastrophe in the heart of Southeast Asia and beyond, the secretary-general said. Grave humanitarian implications, including rapidly deteriorating food security, an increase in mass displacements and a weakened public health system compounded by a new wave of COVID-19 infections require a coordinated approach in complementarity with regional actors.

He said it is imperative to restore Myanmar’s constitutional order and uphold the results of the November 2020 election. He suggested neighbouring countries could leverage their influence over the military to have it respect the will of the people and to act in the greater interest of peace and stability in the country and region.

Guterres said the international and regional effort must be accompanied by the immediate release of Suu Kyi, President Win Myint and other government officials as well as immediate humanitarian access and aid, especially to vulnerable communities, including some 600,000 Rohingya Muslims still in northern Rakhine state and the more than 700,000 who fled a 2017 military crackdown and are now in camps in neighboring Bangladesh.

The report, covering the period from mid-August 2020 to mid-August 2021, said that since the military takeover, security forces have engaged in wide-ranging brutal repression, especially of those protesting Suu Kyi’s ouster, sparked a political crisis with wide implications for the region, and carried out serious human rights violations.

Those expressing opposition to the military and joining democratic movements, as well as their relatives and associates, have been subject to arbitrary killings and detentions, disappearances, night raids, intimidation and torture, Guterres said. There have also been numerous reports of sexual and gender-based violence perpetrated by the security forces.

Between February 1 and late July, he said, there have been at least 150 instances in which security forces reportedly used lethal force against unarmed protesters.

The secretary-general said there have also been numerous reports of violence targeting security forces as well as killings of individuals suspected of collaborating with the military.