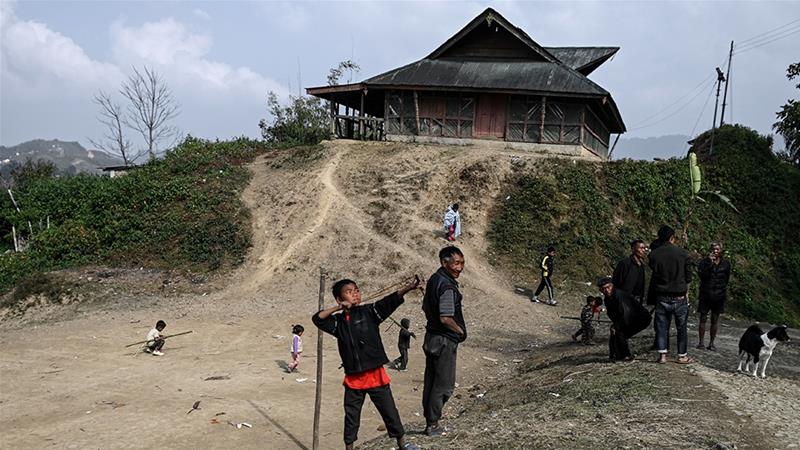 Dozens of Naga tribes yearn to reunite the 3 million living in India with their 400,000 estranged cousins in Myanmar.

The king of the Konyak tribe sleeps in Myanmar, but eats in India – his house, village and people divided by a mountain border which serves as a vulnerable lifeline now severed by a coronavirus lockdown.

The Konyak are just one of dozens of Naga tribes, a people yearning to reunite the 3 million living in India with their 400,000 estranged – and much poorer – cousins in Myanmar’s isolated far north.

Many from Myanmar cross the border to attend school, sell vegetables or visit a hospital, as it is a days-long journey by foot to the nearest town in Myanmar.

Even in normal times, they live at the mercy of Indian soldiers guarding checkpoints against the threat of armed groups fighting for reunification.

Tonyei Phawng claims to be the 12th generation of his family to rule the Konyak, whose feared tattooed warriors once brought home their enemies’ heads as trophies.

His son, the crown prince, will one day take over in a lineage many believe possess supernatural powers.

Dressed in a tracksuit and trainers in his village of Longwa, the 43-year-old king described to AFP news agency in February how his Myanmar brothers were often stopped at the border and detained as they were trying to enter India.

“Their rights are denied.”

Days later, the border was shuttered, not at the whim of Indian soldiers, but because of COVID-19.

For the town of Longwa, which straddles the border, the shutdown has impacted the two sides differently.

The Indian government was providing some emergency rations, but Myanmar’s authorities were not doing the same on their side of the border, Longwa-based tour guide Nahmai Konyak, 34, told AFP by telephone.

Those living hand-to-mouth in Myanmar are finding it very difficult, he said. “We just can’t help them.”

Retreating British colonialists left behind the frontier after World War II, cleaving the Konyak tribe of 44 villages in two – alongside several other tribes.

The Naga on both sides enjoy some degree of autonomy, but there is a huge disparity in the level of development.

Indian roads lead right up to the frontier, bringing business and even some hardy tourists.

Over the border, off-grid villages with few schools or amenities dot thickly-forested slopes, connected by muddy paths in one of Myanmar’s poorest regions.

Thousands of Naga have taken up arms over the decades to try to win a united homeland by force.

The rebels splintered in the late 80s into two main groups, one fighting for the Naga cause each side of the border.

Civilians must pay taxes to help finance the groups and many families “sacrifice” a son to the resistance, says Myanmar Naga activist Jacob Ngansa.

But New Delhi’s relative investment is chiselling away support over the border, the 23-year-old admits with sadness.

“They are brainwashed by the Indian government.”

With India-Myanmar relations blossoming, these are ominous times for Naga nationalists.

Myanmar is hungry for new allies after being snubbed by the West over the Rohingya crisis, while India is keen to counter China’s regional influence over its smaller neighbour.

The newly-formed Naga National Party aims to woo the Naga vote in Myanmar’s elections due later this year.

Once they are in power, chairman Shu Maung says, they will work within the system to bring change. “You cannot live in your uncle’s house forever.”

The battle for the ballot box has already started.

Regional National League of Democracy MP Kail, who goes by one name, is Naga but says his immediate priorities are education, healthcare and food.

“Once we have those, then maybe the younger generations can take up the fight again for the dream.”

But analyst Bertil Lintner believes the best the Myanmar Naga can hope for is more autonomy within the country.

A united Nagaland is “never going to happen,” he says, not least because the tribes are so divided among themselves.

At a viewpoint overlooking Longwa village, smartly-dressed Rongsen Ao was one of the last tourists to make it to the border before it closed.

Excitedly hopping from one side of a demarcation post to the other, the 65-year-old Indian Naga doctor said he had fulfilled a childhood dream by seeing the frontier in person.

But his smile faded when asked about the Naga’s quest for a homeland.

“Everyone feels bitter about being divided…but this is beyond our control.”