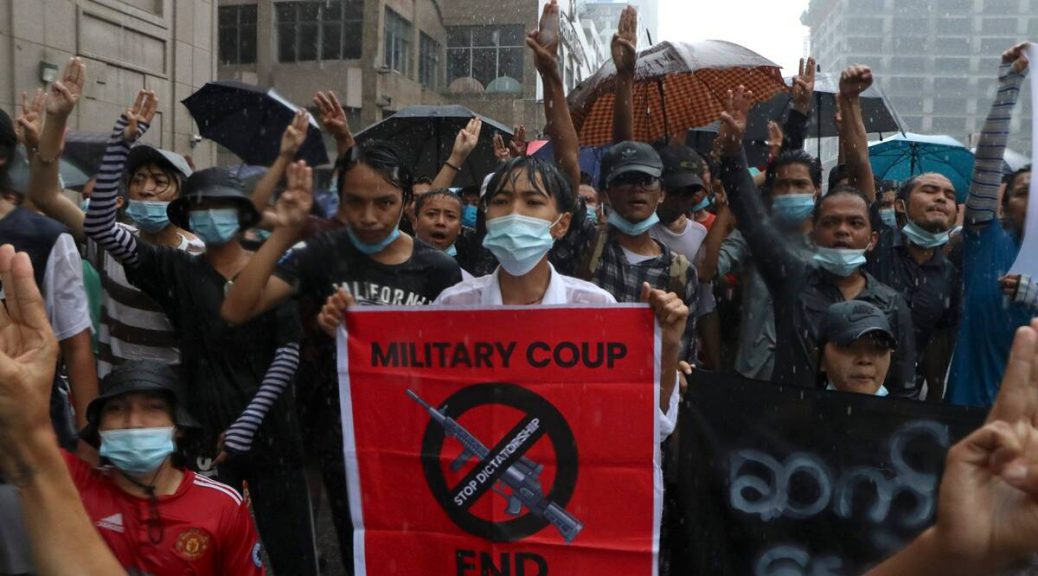 The suspensions come as the resumption of universities after a year closed due to the coronavirus epidemic prompts a new confrontation between the army and the staff and students who are calling for boycotts over the Feb. 1 coup.

More than 11,000 academics and other university staff opposed to Myanmar’s ruling junta have been suspended after going on strike in protest against military rule, a teachers’ group told Reuters.

“I feel upset to give up a job that I adored so much, but I feel proud to stand against injustice,” said one 37-year-old university rector, who gave her name only as Thandar for fear of reprisals.

“My department summoned me today. I’m not going. We shouldn’t follow the orders of the military council.”A professor on a fellowship in the United States said she was told she would have to declare opposition to the strikes or lose her job. Her university authorities had told her every scholar would be tracked down and forced to choose, she told Reuters.

As of Monday, more than 11,100 academic and other staff had been suspended from colleges and universities offering degrees, an official of the Myanmar Teachers’ Federation told Reuters, declining to be identified for fear of reprisals.Reuters was not immediately able to ascertain exactly what proportion of total staff that figure represents. Myanmar had more than 26,000 teachers in universities and other tertiary education institutions in 2018, according to the most recent World Bank data.

Students and teachers were at the forefront of opposition during nearly half a century of military rule and have been prominent in the protests since the army detained elected leader Aung San Suu Kyi and halted a decade of tentative democratic reforms.

Many teachers, like medics and other government workers, have stopped work as part of a civil disobedience movement that has paralysed Myanmar. As protests flared after the coup, security forces occupied campuses in the biggest city, Yangon, and elsewhere.A spokesman for the junta did not respond to phone calls seeking comment on the suspensions.

The junta-controlled Global New Light of Myanmar newspaper said teachers and students should cooperate to get the education system started again.

“Political opportunists do not wish to see such development by committing sabotage acts,” it said.

BOYCOTTSIt was not clear to what extent the 11,000 staff suspensions would hamper efforts to reopen colleges but many students are also boycotting classes.

At the public West Yangon Technological University, the student’s union published a list of 180 staff who had been suspended to hail them as heroes.

“I don’t feel sad to miss school,” said 22-year-old Hnin, a student of the Yangon University of Education. “There’s nothing to lose from missing the junta’s education.

“Zaw Wai Soe, education minister in a rival National Unity Government set up underground by opponents of the junta, said he was touched that students had told him they would only return “when the revolution prevails”.

Doubts have also been raised over the return to school of younger students, with institutions now taking registrations for the start of a new year. There are nearly 10 million school students in the country of 53 million.

Protesters daubed “We don’t want to be educated in military slavery” at the entrance of a school in the southern town of Mawlamyine last week, a phrase that has been echoed at demonstrations across Myanmar by students.

“We’ll go to school only when Grandmother Suu is released,” read a banner of students in the northern town of Hpakant at the weekend, referring to detained leader Suu Kyi. “Free all students at once,” said another sign.

Many students are among at least 780 people killed by security forces and the 3,800 in detention, according to the Assistance Association for Political Prisoners activist group.

At least 47 teachers are also among the detainees while arrest warrants have been issued for some 150 teachers on charges of incitement.

Myanmar’s education system was already one of the poorest in the region – and ranked 92 of 93 countries in a global survey last year.

Even under the leadership of Suu Kyi, who had championed education, spending was below 2% of gross domestic product. That was one of the lowest rates in the world, according to World Bank figures.

Students could have little expectation of progress in Myanmar this year, said Saw Kapi, a founding director of the Salween Institute for Public Policy think tank.

“When it comes to education, I would suggest that instead of thinking about getting a bachelor’s degree, you must go to the University of Life with a major in revolution,” he wrote on social media. “You can go for a Masters or PhD later.”