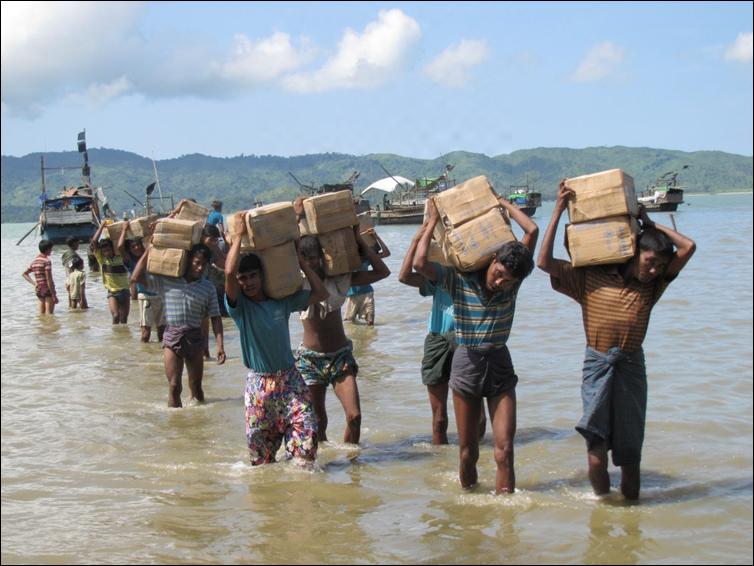 For the past few years migration has been the most significant topic of debate, dissent and discussion around the world. From Trump’s wall along the US-Mexico border to the sands of the Middle East, and from the shores of the Mediterranean to the jungles of Central Africa, conflicts and economic crises have forced many out of their homes and on a seemingly never-ending search for safety. It is indeed true that many of those seeking refuge do actually need it. At the same time, it is also true – as has been stated in countless reports – that unchecked immigration brings with it a gamut of threats for a host culture, a nation and, ultimately, a civilization.

By now everyone who follows the news, even occasionally, is aware of the plight of the Rohingyas. Driven out of their homes in Myanmar, the Rohingyas are fleeing their ravaged lands for shelter in neighbouring Bangladesh by crossing riverine areas. The history of Rohingyas and the debate over whether Myanmar is right or wrong is beyond the scope of this article. But whatever history is available in the public domain points that the Bengali-speaking Rohingyas were settled in the Arakan region by the British, who brought the people from neighbouring lands in what is now Bangladesh. It is also noteworthy that the Rohingya issue is not new. The northwest region of Myanmar has been burning for the past many years now. But international criticism mounted following the government’s crackdown on the armed terrorist group called Arakan-Rohingya Salvation Army (ARSA) which, as a collateral damage, has led to the mass exodus of the Rohingyas. The United Nations calls Rohingyas “the world’s most persecuted community”. The condition of Rohingyas is indeed appalling. In fact, all ethnic minority communities in any of the Asian or African countries live on at the edge of a precipice. Political or religious persecution can either force them to seek refuge in other nations or, in worst cases, push them off the cliff to their doom. Being the world’s most diverse (yet united) country, India has served as an example for the world. It has been home to refugees from neighbouring nations in the past as well; most notably the Tibetans. India is, therefore, being criticised for the government’s decision to deport the Rohingyas, who, according to government estimates, number at around 40,000. The supporters of the Rohingyas are unable to believe that a nation which has been home to many other ethnic minority groups in the past is now taking such a “nonhumanitarian” stand. But the Indian government has given its own reasons for this approach. In their affidavit filed in the Supreme Court, the government defended its decision to deport the Rohingyas on the grounds of national security. In their 16- page affidavit, the government pointed at, among other things, the demographic change, illegal activity being committed by Rohingyas, and their terror links with groups including Islamic State. The details of the affidavit have already been extensively discussed, defended or criticized by journalists, columnists and experts in the media.

At the same time, questions have been raised in public domain on how the Rohingyas reached all the way up to Jammu and “settled” there. Separatist leaders extending their vocal support to Rohingyas residing in the state have been criticised for not standing up in a similar manner for the Kashmiri Pandits – the largest internally displaced group in India. Articles have been written highlighting how in the name of the action against the Rohingyas in Myanmar, terrorists attacked the Mahabodhi temple at Bodh Gaya and some fundamentalists in Mumbai went on rampage during the Azad Maidan riots. It has also been pointed out that Rohingyas, too, have skeletons in their own closet.

The ARSA has been accused by Myanmar for attacks on government forces. In fact, Myanmar claims that its actions are targeted against this terrorist group, which it considers a threat to its national security. The group has also been accused of killing other ethnic population in Rakhine – the Hindus and Buddhists. It is believed that the group receives support from terrorist organisations in other countries, particularly Pakistan and Middle East. While taking a sympathetic approach towards Rohingyas, a New York Times article in September this year had been unable to ignore the rapid rise in Islamic radicalisation in Myanmar.

In fact radicalism of the refugees has been a prime concern of many political commentators for genuine reasons. In September this year, Al Qaeda’s Yemen chief urged Muslims to show solidarity with the Rohingyas by attacking the “enemies of God”. These and other economic reasons have even made Bangladesh – where the highest number of Rohingyas have taken refuge – admit that they pose a security risk. Asaduzzaman Khan, Bangladeshi Home Minister, had expressed his fears to the ABC in the following words: “It (the Rohingya refugee problem) will be our threat in the future. These people left everything. For their survival, they will do anything. Anyone can easily purchase them. They can join the international terrorist groups also.” This is why Bangladesh, too, wants the international community to mount pressure on Myanmar to take the refugees back. And while the international community, particularly the rights agencies, are repeatedly highlighting the “plight pain and suffering” of the Rohingyas, they are doing precious little to address the concerns of the host nations. And then there are voices that claim that the Indian Government is seeing Rohingyas as Muslims and not as refugees. That the population of Muslims – a minority – has steadily risen in India and that they enjoy all the guarantees under our Constitution and hold the highest of offices in the country are perhaps the best answers to such divisive voices. Muslims in India have been coexisting peacefully with members of other religions because of the secular nature of both the society and the law. The Constitution may have included the word ‘secular’ much later but the ethos was ingrained in the people of the country since way, way before independence. On the contrary, the condition of minorities in Pakistan and Bangladesh is indescribably pathetic. The major reason is the complete absence of a secular ethos and the idea in their legal system.

Reports in the media have revealed that Hindu Rohingyas have become targets of fundamentalists in the refugee camp in Bangladesh. Women have had to move around without the vermillion on their foreheads, which is an identifier of any married Hindu woman. (Daily Mail – Sep 25 and 26, 2017) Fundamentalists are allegedly busy converting Hindu Rohingyas than helping people in distress in Bangladesh’s refugee camp – a revelation not even those who are supporting the Rohingyas have been able to deny. It has been alleged that many of those voices which stand up for Rohingyas become silent when it comes to persecution of other minority groups in Islamic countries. It has also been pointed out that many of the rich Islamic countries are only doing lip-service to the Rohingyas. “Isn’t it ironical that the Islamic nations aiding Rohingya jihad and slamming Myanmar are reluctant to give refuge to the fleeing Rohingyas?” asked Brahma Chellany on Twitter. It is a point that the international rights groups are deliberately ignoring. How can some nations have the right to refuse refugees while others don’t? And then there are many questions being asked around by concerned citizens: How can a nation, which is already besieged on all sides by terrorism take the risk of giving shelter to an ethnic group which provides fundamentalists within the country and outside a fertile recruitment ground? How can a nation which already has a hundred thousand mouths to feed afford another 40,000 who will no doubt multiply in large numbers because of a host of social and economic reasons already discussed in public domain? How will India provide them jobs when there are so few for Indians themselves? Who will guarantee that the Rohingyas will not be used as vote banks by the political class? How will the Rohingya who come from a world where a secular ethos we see in India has never been practiced understand India’s multicultural image? Those in support of Rohingyas cite our Constitution which extends rights to everyone in India. It is indeed praiseworthy for our Republic because not all constitutions around the world give such a right.

In the end, all that a sensible human being would hope is that those in distress get a life of dignity without such compromises which might put others in distress.

Courtesy: Manas Sen Gupta is a journalist who writes avidly on International Relations and Foreign Policy

Disclaimer: The views and opinions expressed in this article are those of the author and do not reflect the views of the editorial team of Myanmar’s Matters