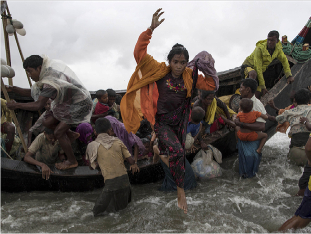 The ‘world’s most persecuted community’ is facing an uncertain future. Forced out of their homeland by a ruling establishment in the name of eradication of “terrorism”, the Rohingyas are now living in a pitiable state in the squalid refugee camps in Bangladesh. Those who once had roofs over their heads and farmlands to sustain on, now sleep under the plastic of tents, or unforgiving sky, and survive on succour from the contributions of donor nations and rights bodies. Since August 25, 2017 – the day when Myanmar began a crackdown on terrorists belonging to the Arakan Rohingya Salvation Army (ARSA), officially, in the Rakhine state – lakhs of Rohingyas have fled into neighbouring Bangladesh to escape the bullets of the Army. In a month from August 25, The Economist estimated that the weekly outflow of refugees from Myanmar was the highest since the Rwandan genocide of 1994. Details of the persecution faced by the Rohingyas are horrific, to put it succinctly. Media reports speak of alleged violence against Rohingya women, children being thrown into fires, and people being shot and their bodies disposed of in the bushes and rivers that dot the landscape of the Rakhine state. Myanmar has repeatedly denied all the accusations levelled at it by international bodies including the United Nations.

In January, however, the Myanmar Army admitted to have killed 10 Rohingyas believing them to be ARSA terrorists on September 2, 2017, in the village of Inn Din, situated to the north of Sittwe, the capital of Rakhine. At the time of writing, it marks the only instance when the powerful Junta accepted a wrong, yet the word ‘terrorists’ associated with those killed appeared like a conspicuous excuse. This reflects on the fact that Myanmar has never recognised Rohingyas as their own people. This is why the Rohingyas have no rights till date in the land they have been inhabiting since before the Colonial times. Myanmar’s de facto leader and Nobel Peace laureate Aung San Suu Kyi, who had called the admission by the country’s Army “a positive step”, continues to be under tremendous pressure from rights bodies and other Nobel laureates who want her to actually do more to end the crisis – described by the UNHRC as “ethnic cleansing” – and not “stay silent”. On March 7, the US Holocaust Memorial revoked the prestigious Elie Wiesel Award from Suu Kyi while accusing her and her party, the National League for Democracy, for having “refused to cooperate with United Nations investigators, blocked access to journalists and promulgated hateful rhetoric against the Rohingya community”. While issuing threats to drag Myanmar to the International Court of Justice (ICJ) for the “genocide”, Nobel laureates Shirin Ebadi from Iran, Mairead Maguire from Northern Ireland, and Tawakkol Karman from Yemen demanded that Suu Kyi take the Rohingyas back in and provide them with citizenship.

On March 6, the UN Assistant Secretary-General for Human Rights, Andrew Gilmour, said that systemic persecution of Rohingyas continue in Myanmar even though the violence has ebbed. Following a visit to the refugee camps in Bangladesh, he said that the new weapons of the Myanmar Army are “lower intensity campaign of terror” and “starvation” with a singular aim to force Rohingyas out of Rakhine and into Bangladesh.

Thus, as the persecution continues at home, Rohingyas are steadily entering Bangladesh – many of them crossing the Naf river, which marks a part of the border between the two nations and is closest to motorable roads leading to Cox’s Bazar.
Mr. Masud Bin Momen, Permanent Representative of Bangladesh to the United Nations, countered claims that the arrival of refugees has gone down by stating that some 1,500 Rohingyas had crossed into Bangladesh in the first 10 days of February alone. According to reports, the new refugees continue to point at the same atrocities which have been driving the Rohingyas out of Myanmar since August. According to the United Nations, the total number of refugees in Bangladesh since the start of the crisis in August now stands at around 700,000. But Bangladesh has been a shelter for the Rohingyas, a huge majority of whom are Muslims, even before. There were already over 300,000 Rohingyas in Bangladesh who arrived during similar periods of persecution since 1980s. In mid-January, Bangladesh had registered over a million Rohingyas living in various refugee camps in the country, most of whom are concentrated in Cox’s Bazar district in south-eastern Bangladesh. It is this district which serves as the new ‘home’ of the Rohingyas and is the focal point for rights bodies, administrations and the media who want to document the horrors faced by the persecuted community.

According to Mr. Abu Noman Mohammad Zakir Hossain, Deputy Director of Bangladesh’s Passport and Immigration Department, that one-million-mark is 95 percent of the total number of Rohingyas in Bangladesh.
So, this brings us to the question: How will Bangladesh, a densely- populated and economically struggling nation, deal with the Rohingya crisis?

Dhaka and Nay Pyi Daw had in November 2017 reached an agreement on repatriation of the Rohingyas. They had then agreed that the repatriation of the Rohingyas who arrived in Bangladesh since last August will commence within two months. It was estimated that all of the Rohingyas will be resettled in Myanmar in the next two years. Following the news of the agreement and the registration of Rohingyas, hopes of a positive future rose in the hearts of those looking for peace and settlement of the crisis. But on January 22, Bangladesh said that the process will be delayed. Dhaka cited lack of preparations on the ground for the safe return of the refugees.

According to Bangladesh’s Refugee Relief and Repatriation Commissioner, Mr. Abul Kalam, Dhaka still had to “build some physical infrastructure, a transit camp and prepare the list based on family and village”. He had also said that Nay Pyi Daw, too, had to “do a lot to ensure a safe repatriation” even though Myanmar claimed that it was ready. According to the Global New Light of Myanmar newspaper the government was making final preparations to house the repatriates at a camp near Maungdaw in western part of Rakhine. Yet rights groups, too, have expressed concerns about the fate of Rohingyas after they return to Myanmar. Gilmour had raised doubts over the repatriation of the refugees under “current conditions”. The Rights groups and Bangladesh are not the only ones with concerns. The Rohingyas themselves have a lot to say. In January, some leaders of the community showed a list of demands to a Reuters journalist they said should be fulfilled before the repatriation process. Among the demands are release of “innocent Rohingya” the Army detained during the operations against ARSA and a call to hold the military accountable for the alleged crimes.

And even if the repatriation takes place according to the agreement in the near future, where would the Rohingya go? According to the non-profit Human Rights Watch, the Myanmar government has been razing houses in abandoned Rohingya villages. The HRW says that the villages should be “preserved” so that UN experts can document the abuses on the Rohingyas.
So, we are back to square one. For whatever reasons, Bangladesh is unable to repatriate the Rohingyas, and that could translate into a major problem for both Dhaka and the Rohingyas.

Hossain had said that the primary goal of registering the Rohingyas – for which fingerprints, too, were taken – was to prevent them from taking Bangladeshi passport. This means that Bangladesh is in no mood to give the refugees permanent residency and citizenship. Of course, Dhaka has the right not to. The governments of Malaysia and Indonesia – both Muslim-majority nations – do not recognise the Rohingyas living in their countries. But they have been at the forefront of the voices calling for return and rehabilitation of Rohingyas in Myanmar.

There are also some hard truths about Bangladesh. With over 1251 persons per square kilometre, Bangladesh is the world’s most densely-populated country among nations where the population is more than 10 million. Though Bangladesh has steadily clocked a modest GDP growth rate of around 7 percent, a sharp rise in population of the magnitude witnessed in the refugee crisis can go terribly wrong for an economy if not handled deftly.

Early in January, the UN World Food Programme (WFP) Rohingya Emergency Vulnerability Assessment had raised a red flag over under-nourished refugees in Bangladesh’s camps who, at the time, were over 90 per cent of the recent refugee arrivals. And while praising Bangladesh’s humanitarian response, Gilmour had also pointed at the danger lurking in the form of approaching rainy season which have the potential to turn the camps into breeding grounds for diseases.

And then there is always the threat of radicalisation looming large in Bangladesh, which poses a direct threat to peace in the region. Bangladesh’s road transport minister in Prime Minister Sheikh Hasina’s cabinet, Obaidul Quader, had in December 2017 claimed that Pakistan’s spy agency Inter-Services Intelligence (ISI) was plotting with terrorist elements within the Rohingyas to create disturbance in the region. His concern doesn’t appear misplaced given the fact that the ARSA is led by Karachi-born Ata Ullah.

Radicalisation of Rohingya refugees in the camps has been a concern of many given the rise of fundamentalism in Bangladesh. Though the Bangladeshi government has always championed secularism in the country, it has failed in protecting scores of liberal bloggers and writers from fundamentalists in the recent past.

Aware of the risks faced by her country, Sheikh Hasina had in February urged India to “put pressure” on Myanmar to make them take back the refugees quickly. India, too, has expressed concerns over risk of radicalisation of the 40,000 Rohingyas who live in world’s largest democracy. That there is a risk to Bangladesh can be read from Myanmar’s January demand asking Dhaka to arrest and extradite over 1,300 Rohingyas suspected of taking part in the assault in August 2017 on checkpoints which triggered the aggressive retaliation by the military.

And how will Bangladesh feed the lakhs of mouths who will obviously multiply in the future? Dhaka depends on international funding for providing relief to the refugees. But, as Nazneen Ahmed pointed out, funding will not go on forever. The BRAC Institute of Governance and Development (BIGD), BRAC University, staff member wrote in The Daily Star that amount of humanitarian assistance is at the discretion of the donor, will continue till the next big crisis comes up, and is dependent on changing patterns in global economy. So, in short, Bangladesh cannot keep the Rohingyas forever by relying on international aid alone. The pressure on Bangladesh is so intense that it will take the entire international community’s coordinated efforts to lift it off Dhaka’s shoulders. But is the international community doing enough to find a permanent solution to the problem? Will Bangladesh bear the weight all alone and if it does, will it follow Malaysia’s example? What about the security risk to the region if the Rohingyas, many of whom must be harbouring resentment towards Buddhists, are not repatriated? What about Myanmar’s concerns regarding ARSA and how should the UN deal with Nay Pyi Daw? And what about UN Security Council’s consensus on the matter given that Russia and China – two Veto powers – are on a slightly different tangent with regard to Myanmar?

There are a lot of questions but the biggest one is: Will the Rohingyas continue to remain the lesser humans?

Courtesy:
Manas Sen Gupta is a journalist who writes avidly on International Relations and Foreign Policy

Disclaimer:
The views and opinions expressed in this article are those of the author, and do not reflect the views of the editorial team of Myanmar Matters.