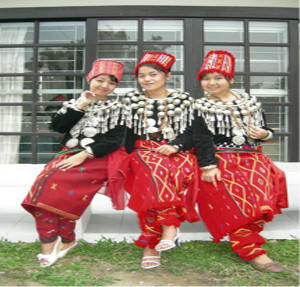 Mon people form another large ethnic group in Myanmar comprising of a population around 8 million. The Mon people mostly inhabit in Mon State which is located in the Southern part of Myanmar. They are considered to be one of the first to settle not only in Myanmar but also in the Southeast Asia region. Theravada Buddhism is the oldest school of religion in both Burma and Thailand and Mon people were the ones responsible for spreading it. The Mon culture is ancient and also very rich and influential. This culture has had a deep impact on the culture of Myanmar as a whole and the Mon script was even incorporated into the unified Burmese language. The Chin people are of Tibeto-Burman origin and assumed to have come to Myanmar in the late 9th century AD and it is believed that they moved westward for some time before settling in the present Chin State around 1300 AD. They are divided into many different sub-groups and their present population is estimated to be about 1.5 million. The Chin State lies in the north-western part of Myanmar which is adjacent to India. Many Chin people also live in Indian states of Nagaland, Mizoram, Manipur and Assam. Most Chin people moved westward and they probably settled in the present Chin State around 1300-1400 AD. The population of Kachin people living in Myanmar is estimated to be around 1 to 1.5 million. They majorly inhabit the north-eastern part of Myanmar and many people belonging to this ethnic group also reside in parts of India and China. They are further divided into different ethnic sub groups and some of the tribes included in this ethnic group are Hkahkus, Gauris, Lashis, Marus, Atsis and Nungs, and Jinghpaw. Kachin people are traditionally hill dwellers who practice rotational cultivation of hill rice. Traditionally they were animists but Christianity spread during the British rule and now a vast majority of them are Christians. The Kayah people can in a way considered to be a subset of the Kayin (Karen) people. They are also known as Karenni which is translated as Red Karen. They get this name because their preferred color of clothing is red. They are believed to have migrated from China around late 6th Century AD and thus they are one of the oldest people to have settled in Myanmar. At present their population is estimated to be around 300,000. The Kayah State is situated in eastern Myanmar and lies between Karen and Shan states. The Rakhine people constitute the largest ethnic group residing in Rakhine State which lies in western Myanmar and spreads along the Bay of Bengal. There are no clear census figures available about their population but they are estimated to form around 5 percent of Burma’s population. Some Rakhine people also reside in the neighboring country of Bangladesh and it is estimated that their dialect is spoken by approximately 35,000 people there. Many Rakhine descendants reside in Tripura state in India where they are known as Mog. Their presence in Tripura dates back to the rise of the Rakhine Kingdom which was then known as Arakanese kingdom and during that time Tripura was ruled by Rakhine kings. They are majorly Theravada Buddhists which is one of the four main Buddhist ethnic groups of Myanmar. There are an estimated 5 -6 million Shan people living in Myanmar currently. Most of them reside in the Shan state but some also reside in parts of Mandalay Region, Kachin State, Kayin State, and in adjacent regions of China, Laos and Thailand. Most Shan people are Theravada Buddhists, though there are some other ethnic groups living in Shan state that practice Christianity. Tai Yai, Tai Lue, Tai Khuen, and Tai Neua are the major groups of Shan people. Other Shan ethnic groups include Tai Ahom, Tai Mao, Tai Khamti, Tai Man, Tai Leng, Tai Ting, Tai Taɯ, Tai Nui, Tai Phake, Tai Saʔ, Tai Loi, Tai Dam, and Tai Don.