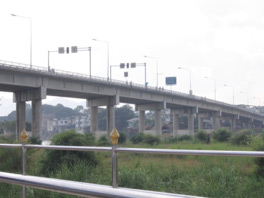 Kaladan is a ₹ 2,904 crore aimed at enhancing economic ties between Myanmar and India. crore project is a Kaladan multi-modal transit transport project is cornerstone of India-Myanmar economic ties, feels Win Aung, President, Federation of Chambers of Commerce and Industry, Myanmar. The initial cost of the project was estimated at ₹ 535.91 crore in March, 2008 when it was approved by the cabinet but in October, 2015 this estimate was revised and the current figure of ₹ 2,904 was stated.

The project involves a 225 kilometres long waterway route along the Kaladan River from Sittwe Port to Kaletwa and a 62 kilometres long roadway a roadway from Kaletwa to the India-Myanmar border. The Kaladan project is of great importance for both Myanmar and India. Once completed, it will provide a huge boost to the economy of Myanmar by enhancing trade through the Sittwe port. It is also extremely important for India as it will provide second route for goods from India’s North East to rest of the country and the rest of the world. At present India’s North East is connected to mainland by only a narrow strip of land which makes it very difficult to access.

Apart from boosting the economy of Myanmar, the project will also make for an alternative route for goods from India’s North-East to rest of the (country and) world. Furthermore, the project will help India counterbalance China’s growing influence in Myanmar. The waterway part of the Kaladan Multi-Modal Transit Transport Project is expected to be completed by 2016 and the road part should be completed and operational by 2019. Essar, an Indian multinational conglomerate holding company, is involved in the project and working to build is the Sittwe port. The dredging work on Kaladan River has been started and construction is expected to be completed soon.