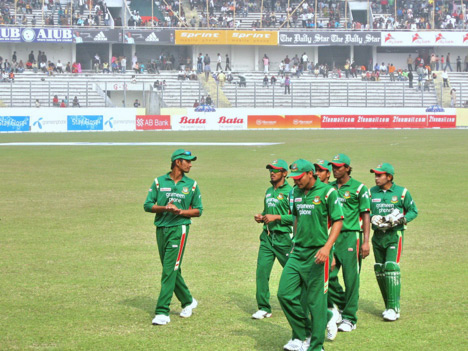 Bangladesh has been playing cricket for many years now and this journey started with its first international cricket match in 1979 when it participated the International Cricket Council (ICC) Trophy tournament. However, for a long time this team was not taken seriously by the rest of the cricketing world. This is clear from the fact that it took this team so long to achieve the Test team status and it was able to play its first test match only in November, 2000. After achieving the Test status, Bangladesh formally established the Bangladesh Cricket Board (BCB) in the same year. Much of this delay may also be attributed to separation of East and West Pakistan and Bangladesh emerging as a new country which forced it to begin from the scratch and assert its cricketing nation status all over again.

In the 1979 ICC Trophy tournament, Bangladesh won its first ever international cricket match against Fiji and later also defeated Malaysia. The team could not make it to the semi-final stage due to losses against Canada and Denmark. The country’s first ICC Trophy win came in 1997 where Bangladesh pulled off an impressive performance by winning all five of its matches and this qualifying for the Cricket World Cup to be held in England in 1999. Even after that it was still considered a minnow by the other cricketing teams as it was not able to match them in terms of performance. Bangladesh performed quite poorly for a long time and holds the record of most successive losses in both test matches and one day internationals. This team lost 21 test matches consecutively between 2000 and 2002. It also lost 23 one day internationals consecutively between 2001 and 2004.

The cricket team of Bangladesh has a come a long way since its inaugural international match in 1979. Today it is ranked ninth in Tests, seventh in one day internationals and tenth in Twenty-twenty internationals by the International Cricket Council. Bangladesh also has a Women Cricket team that is ranked ninth in the world. In the past, Bangladesh’s men’s cricket team was not taken seriously at all. Any match it participated in was considered one-sided and it was assumed that the other team is surely going to win unless that team happened to be another minnow itself such as Scotland, Holland, and likes. But today things have changed a lot. Bangladesh has proven that it cannot be taken lightly by beating cricketing giants such as South Africa, Pakistan, and India. It has even managed to win a few series against some of the top teams. By showing tremendous improvement and pulling off multiple impressive performances against strong opponents, Bangladesh has declared its arrival as a good cricket team. Its outstanding performances and impressive victories have provided it a lot of respect and the whole world has been forced to stand up and notice. This development has been welcomed by the cricketing world and is being considered good for the future of cricket. This team is certainly moving in the right direction and its moving fast. The fans of cricket in Bangladesh are delighted and now they can dream of becoming the number one team in the world and maybe even win the World Cup one day.