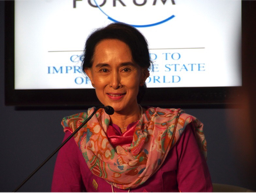 Aung San Su Kyi was born in Yangon (now Rangoon) on 19 June, 1945. Her father Aung San was the founder of the Burmese Army and he was the one who negotiated with the British Empire and got Myanmar its independence. Unfortunately, he was assassinated by his rivals in the very same year. Aung San Su Kyi and her two brothers were brought up by their mother Khin Kyi. Another tragedy struck the family when one of her brothers Aung San Lin died at the age of eight. Her second brother Aung San Oo emigrated to San Diego, California and became a United States citizen. Soon after Aung San Lin’s death, Aung San Su Kyi’s family moved to a house by Inya Lake and here her mother grew prominent as a political figure. Khin Kyi was posted in India and Nepal as Myanmar’s Ambassador and Aung San Suu Kyi lived there along with her. She also completed most of her schooling and college studies in India. For her higher studies Aung San Su Kyi went to England and studies at St Hugh’s College, Oxford. After getting a M.A degree in Philosophy, Politics and Economics she moved to New York U.S.A. She worked at the United Nations for three years and in 1972 she married Dr. Michael Aris who was a scholar of Tibetan culture and lived in Bhutan. She gave birth to two children Alexander Aris and Kim. Suu Kyi further worked to obtain an M.Phil degree in Burmese literature as a research student at School of Oriental and African Studies (SOAS), University of London. She went on to be elected as an Honorary Fellow of SOAS in 1990 and for two years she was also a Fellow at the Indian Institute of Advanced Studies (IIAS) in Shimla, India. She also had the honor of working for the government of the Union of Burma for some time.

In order to attend to her ailing mother, Su Kyi returned to Myanmar in 1988. However, during this visit she got deeply touched by the plight of the Myanmar citizens and went on to lead the pro-democracy movement in order to change things for better. She remained in Myanmar to continue her fight while her husband was denied entry visas thus making it impossible for them to meet. Most of the time of her struggle for democracy was spent under house arrest which was only lifted in 2010. In 1997 Aung San Su Kyi faced one of the biggest dilemmas of her life when her husband Mr. Aris was diagnosed with prostate cancer which was found to be fatal. Myanmar government still refused to allow him to enter the country and Su Kyi didn’t want to leave as she feared she wouldn’t be allowed to enter the country again if she left. Michael Aris died on his 53rd birthday on 27 March 1999. National League for Democracy (NLD) was formed in 1988 under the leadership of Aung San Su Kyi. The party was very popular among the people of Myanmar and it won a significant parliamentary majority in the elections that took place in 1990. Many people believe that Aung San Suu Kyi would have assumed the office of Prime Minister after winning these elections but she was not permitted to stand as a candidate. Eventually, the ruling Military government even refused to acknowledge the election results. Later, NLD refused to register for the elections which were to take place in November 2010 as a protest against many of its members being barred from standing in the elections. Due to this reason, the military junta declared the party illegal and ordered for it to be disbanded. In 2011, Su Kyi engaged in Discussions with the Myanmar Government which went well and they agreed to take measures to meet many of her demands. Two of the most significant outcomes of these talks were the legalization of trade unions and freedom of lot of Myanmar’s political prisoners. In November 2011, NLD announced its intention to re-register as a political party. Under the leadership of Aung San Su Kyi, the party believes in appealing for pro-democracy in a nonviolent way. Now that Myanmar is gearing up for 2015 elections to be held in November, NLD is expected to fare really well and win the majority of the seats. Even if NLD wins the election, Aung San Su Kyi might not be eligible to become the president as there is a law forbidding anyone with a foreign spouse to hold that post.  However, she still can play a very important role by acting as a leader and a guide for both NLD and the people of Myanmar.