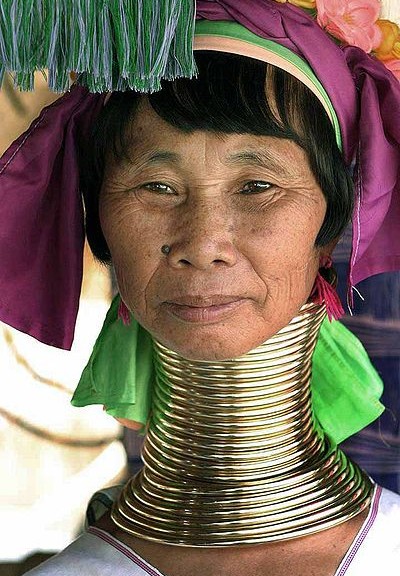 The Kayan Lahwi hill tribe of Myanmar has always attracted curiosity from people world over for their unique characteristic of wearing brass coils around their neck, which tends to elongate their neck. They are also, popularly known as the “long neck” people or “giraffe” tribe. While wearing the ring around their neck stems from different interpretations of myths and mythologies- some bizarre and some fascinating, the practice of wearing these brass rings has become sacrosanct to their identity.

Women of the tribe start wearing the brass coils around their neck as young as when they are 2 years old and as they continue to grow up, the coils are replaced by a longer one and more turns are added. They seldom remove it, however, the women of the younger generation have recently protested against the practice to continue their education and to fight against the exploitation of their culture and the restrictions that came with it.

Some people and studies support the claim that the coil gives an illusion of an elongated neck but does not actually elongate it. If the neck was actually elongated, it is not possible for a person to survive. However, they have been recorded on the Guinness Book of World Records to having the longest neck at 40cms. Apart from the coil around their neck, their traditional outfit and ornaments on their petite stature is also very striking.

A lot of focus is given to their ring wearing practice but this hill tribe village also draws attention to itself through its subsistence rice farmers, its warm and friendly people, its women still wearing traditional outfits and ornaments, their rituals and traditions, their skills such as weaving, basket making, wood carving and their handicrafts and other handmade produce – clothing, head gear, musical instruments, betel nut boxes and animal bells, which they also sell to tourists as souvenirs.

The staple diet of the Karen people is fish and rice, which they source for themselves through farming and fishing. Karen language is written in Burmese script and is among the Sino- Tibetan languages and has a subject-object-verb order. They practice Buddhism and Christianity but the Christian Karens faced more oppression in Myanmar because of their religious faith in a predominantly Buddhist country.

The Karen people of Myanmar live isolated in the northern hills of Thailand in refugee camps and their home is a popular tourist destination. So much so that their source of income from tourist visits is meagre for them to sustain a livelihood, separate from the earlier military regime of Myanmar. They have suffered oppression incessantly at the hands of the military regime in Burma by way of denial of citizenship, political representation, status and basic human rights. They may have a better life in the refugee camps in Thailand but some of them still carry a hope of returning to their homeland someday, of getting a status and of a life that helps them overcome the struggle of living in a modern world and the day to day challenges of making ends meet.

Despite their legal status, the atrocities and hardships that they have been through and the challenges that they face living in an archaic boundary, these people are friendly, accepting, respectful, warm and welcoming.