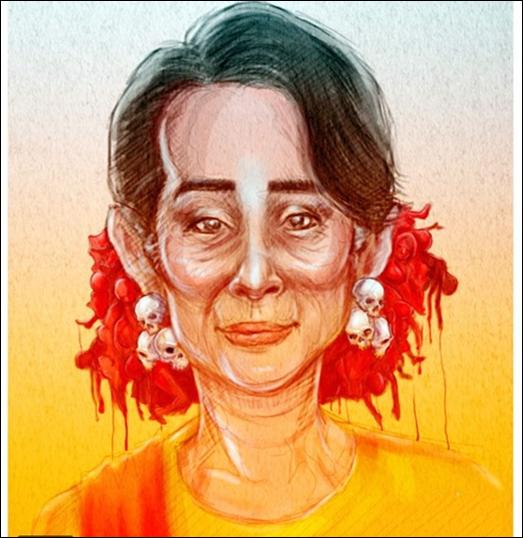 The sweeping victory of the National League for Democracy (NLD) led by Daw Aung San Suu Kyi in 2015 heralded an era of democratic reforms and an end to military dictatorship. The Nobel Peace Prize got bestowed upon her in 1991 while she was still under house arrest and probably not even aware of the news. Overnight, she became an international icon —fought the Myanmar military governance (i.e.theTatmadaw) — forging the path ahead for liberalization and democratization. However, in the light of the recent Rohingya crisis, Myanmar has come under immense criticism from different quarters of the international community. The public shaming of Aung San Suu Kyi has been doing the rounds in social media, news dailies and leading websites whereby she has been highly condemned for keeping quiet on the atrocities meted out to millions of Rohingya refugees in the Rakhine state who are now seeking shelter in neighbouring countries of Bangladesh and India. Her long kept silence was finally broken when she claimed that Myanmar has never been soft on human rights offenders, thereby ‘without offering a hint of solace or consolation’.

The brimming cynicism levelled against Aung San Suu Kyi has been growing far and wide to the extent of stripping her off the Nobel Peace Prize which may not be possible, in reality. However, her alma mater, the University of Oxford, has decided to withdraw an honorary title awarded to her in 1997, in the aftermath of the Rohingya crisis. Criticisms have also come in the form of the United Nations High Commissioner for Human rights expressing their disapproval over the crisis as ‘textbook example of ethnic cleansing’. Another Nobel Laureate Mr. Desmond Tutu reportedly wrote to Daw San Suu Kyi saying that “If the political price of your ascension to the highest office in Myanmar is your silence, the price is surely too steep.”

However, given this background of backlashes and censures, the global community cannot simply keep on harping at it. In fact, it also cannot negate the counternarrative offered by Daw Aung San Suu Kyi of an “iceberg of misinformation” where she has invited the international media to talk to the surviving Rohingya inhabitants and crosscheck the ground realities in the Rakhine region. Interestingly, as quoted in one of the reports by RSIS, there has been one prominent story which came out in the Myanmar social media. It was said that on August 25 2017 the Arakan Rohingya Salvation Army (ARSA) had already planned an attack on the military posts in order to provoke the Tatmadaw military to give way to a disturbing scenario. This was ironically a day before the release of the Report by Advisory Commission of Rakhine State. If one goes by this narrative, it can be deduced that such an attack was particularly targeted to damage the public image of Daw Aung San Suu Kyi and in turn, ruin her efforts towards building a peaceful and fair future for the Rakhine State. According to Ms. Kang Siew Kheng, a leading researcher at RSIS, who has aptly remarked that “for sure, no deemed past wrongs in history can justify present-day violence, but no present-day policy can bring about reconciliation until the old animosities have been addressed.”

The state of Rakhine has all along witnessed a colonial divide and rule strategy which has been reinforced by generations of politics complicated by extreme poverty and economic deprivation of its ethnic inhabitants. It is important to understand here that the victory achieved by Daw Aung San Suu Kyi in 2015 occurred amida wave of nationalism accompanied by growing sense of doubt and suspicion, especially in the case of the Rohingya minorities. The victory of democracy, paradoxically, gave a free rein to some entrenched sentiments that were previously put under harsh control of the military. Significantly, the NLD did not fair that well as it largely did in the other parts of the country. Experts believe that the electoral base of Suu Kyi regarded the Rohingyas “as a late political construct” who were mainly temporary migrant labourers residing in permeable borders. They are now being used to legitimise old claims of autonomy and independence.

The future of Rohingya Muslims is undoubtedly at stake and it is essential to understand here that this crisis is not merely an internal conflict concerning Myanmar. It certainly has a larger picture which is attached to the global scenario. At present, even though Daw Aung San Suu Kyi has failed to address the needs of the ethnic minorities, she needs all the help she can, from inside and outside Myanmar. It is time for the neighbouring countries, such as India and China and also the regional bloc ASEAN to intervene positively and engage in a coordinate course of action to bring out a longlasting solution. Isolating Myanmar or imposing economic sanctions on it is certainly not going to reap any results. As it is, the country, over the years, has been slowly struggling to achieve a definitive level of economic and political reforms. The insipid stance taken by the ASEAN on the Rakhine situation following an ASEAN Foreign Ministers meeting on the sidelines of the UN General Assembly in New York was not only predictable but disappointing. The Rohingya crisis has the potential to transform itself into a global catastrophe leading to greater instability if not addressed urgently.

At the end, it would be interesting to observe Daw Aung San Suu Kyi put her skills of statecraft to test while she enforces some sort of national reconciliation amid the multitude of challenges that surround her now.

Courtesy- Swati Prabhu is a research scholar & an ardent contributor to National Dailies.

Disclaimer: The views and opinions expressed in this article are those of the author and do not reflect the views of the editorial team of Myanmar Matters