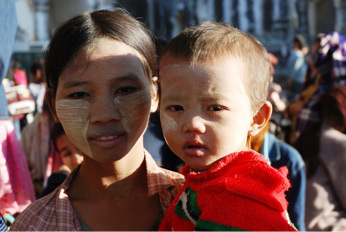 Besides Myanmar’s splendid natural beauty, another thing that catches the eyes of the first time visitors to Myanmar is the yellowish coloured patterns of different kinds painted on the faces of people. It is a common sight for the inhabitants of Myanmar but the foreigners are intrigued as nowhere else in the world can you get to see this phenomenon in such abundance. In Myanmar, you can easily see various people sporting squares, circles, or lines on their foreheads, noses, or cheeks. These patterns are made using a yellowish white cosmetic paste called “thanaka” which is made from the bark of a tree which is also named “thanaka”.

The cosmetic produced by grinding the bark of the thanaka tree on a flat and smooth stone which produces a milky yellow paste. Myanmar people apply this paste on their skin and as soon as it comes in contact with skin it quickly dries. Although men apply this cosmetic paste too, it is used more commonly and more frequently by women and children. There are various reasons for popularity of thanaka in Myanmar. It serves as a natural sunscreen which protects the skin from the harmful effects on the sunlight and it also helps to keep the skin cool. Thanaka is also used as a beauty product as it improves complexion, stops oiliness, and tightens pores. In a way, it also serves as a soft soothing perfume due to its mild but pleasant fragrance. Another important use of thanaka is as a medical product that has the ability to cure fungal infection, skin sores, acne, fever, epilepsy, measles, and even poisoning.

In rural Myanmar, most people work in fields and they mainly use thanka as a sunscreen for protection against sunburns and other damage caused by sun. People in urban areas whose work requires them to spend a long amount of time out in the open also use it for the same purpose. However, the nature of work in urban areas doesn’t require many people to face direct sunlight for long so they mainly use it for cosmetic purposes. Some people, mainly women, like the way thanaka patterns on their face make them look and they use it as kind of a style accessory.  Making leaf patterns on face using thanaka paste is quite popular among women living in urban areas of Myanmar. Myanmar people believe that the yellow colour of thanaka matches really well with their complexion. When urban women use thanaka, they usually put a makeup foundation on their skin and then apply thanaka on top of that. This helps them keep their skin dry and non- oily and also has a cooling effect which makes it easier to bear the summer heat. While going outside their homes, people use thanaka sparingly but during night time, on weekends and other off-days people of both genders use it quite freely. Besides having good effects on the texture and complexion of the skin, thanaka also helps in having a good sleep as it feels soothing and has a very pleasant fragrance. Thanaka has been in use in Myanmar for more than 2000 years and even after all this time its use still remains as popular as ever.

Traditionally thanaka is sold as blocks which range in 10-20 centimetres in length. Thanaka trees grow abundantly in central Myanmar which is mostly a dry zone.  There are different varieties of the tree which vary slightly in quality and all of them can grow without a lot of water. The varieties that grow on dry, rocky soil, blended with sand and laterite are considered to be the best as they produce hard, thin bark that is both durable and fragrant. The most popular thanaka barks come from the trees that grow in the Shinmataung area and they can cost up to 9,000 kyat in the Yangon market. Though, a thanaka tree’s trunk usually reaches a good 2 inches diameter within 10 years, high quality thanaka bark is believed to come from trees that are at least 35 years old. Thanaka trees also grow in Thailand and some areas of India but their use is not as popular in any other country as it is Myanmar.

These days, many commercial preparations of thanaka are available in the market which eliminates the need of having to prepare the paste on your own. Such products are available as creams, pastes and powders which are mostly exported and are extremely popular among Myanmar people living in other countries. Use of such products is also gaining popularity in Thai spas and many of them have started using commercial thanaka preparations in their treatments. The use of such products is becoming popular among the local people living in the urban areas as well. However, most people still prefer the traditional method of preparing their own thanaka paste as it gives them assurance of getting the real product and also enables them to control the quality as per their preference.