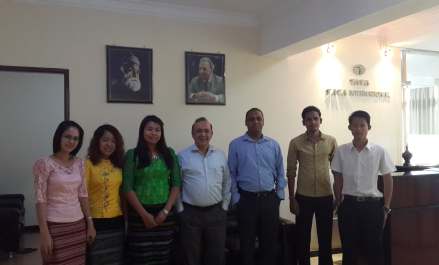 AGRI TRADING
Tata International Ltd (TIL) has recently forayed into the business of trading in agricultural commodities and is still in the introduction stage. There is trading in pulses such as split pigeon peas and black matpe (Toor Whole and Urad Dals, as they are known in India) from Myanmar.

TIL provides an end-to-end trading solution, to customers including sourcing, logistics, documentary support and customer service. The product development team is constantly engaged in growing Tata’ sourcing base while also adhering to quality and food safety standards.

The focus is on bulk sourcing of agricultural commodities from Africa and Myanmar for India and neighboring countries.

CONSTRUCTION, FARM AND MINING EQUIPMENTS
Construction sector of the company is engaged in marketing and distribution of a wide and exhaustive array of earthmoving and civil construction as well as agricultural equipment. Some of the major partners are Aquarius Tech Ltd and LeeBoy of which the major products/service offerings are Ready Mix Concrete (RMC), Tata Hitachi Concrete Trucks and import of animal feed.

CHEMICALS
This division offers following products to companies in Africa:

They also partner with various corporations to help them in efficient sourcing of chemicals from India and China.

POWER
More than 70% of Myanmar’s 60 million people live in rural areas, where the average electrification rate is a mere 16%. Only 26% of the country’s population has access to electricity.

Tata Power has signed a memorandum of understanding (MoU) with the Government of Myanmar for setting up an imported thermal coal-based power plant. The power plant is proposed to be located in Pathein, Ayeyarwady region.The capacity of the power station is 1320 Win phases.

Solar Power is also the next avenue for Tata Power in Myanmar, especially in rural Myanmar.Solar power plants satisfy all the energy requirements of a village, including domestic and commercial lights, entertainment facilities and intelligent water pumping systems.

SPECIAL ECONOMIC ZONES
KyaukPyu – Tata Consultancy is looking to set up a special economic zone in this area of Myanmar.

Other avenues being explored by Tata International in Myanmar are Tata Housing, Tourism (Taj Group of Hotels), Retail and Tata Interactive which involves education and skill development.

The strengths and areas of improvement that the Myanmar Government could learn from its neighboring countries.