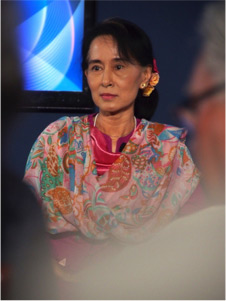 Ms. Aung San Suu Kyi, Myanmar’s newly appointed State Counselor, spoke at the Union Peace Conference for the first time. This event was held on 12 January, 2016 which was after the election results were announced but before she had accepted any position in Myanmar Government. In the past, Ms. Suu Kyi has called this peace conference a sham and openly criticized it. Therefore, her presence at the event and making a speech there was a big surprise to everyone. These talks were attended by the members of parliament, military and some of the armed guerrilla groups.

These groups have been at war with Myanmar Government for the last many years and have caused serious disruptions and damage. Ms. Suu Kyi’s presence and speech at the event has provided a big boost to the chances of the talks being successful which can bring about a much needed long term peace in country. Ms. Suu Kyi was against these talks earlier because she doubted the intentions of the army. She was of the opinion that these talks and even the ceasefire agreement reached between some rebel groups and Myanmar Governments earlier are both meaningless and just a show-off ploy to project false image to the people.

Showing up at the peace conference and speaking there shows that Ms. Suu Kyi has now changed her opinion on the matter. Her making this gesture after her party wining the elections comfortably and ready to form the new Government shows that she is willing to cooperate and work harmoniously with the previous Government leaders and the army towards the betterment of Myanmar. Her involvement may also help to persuade the other rebel groups who have been so far resisting the peace process to lay down their arms and enter negotiations with the Government.