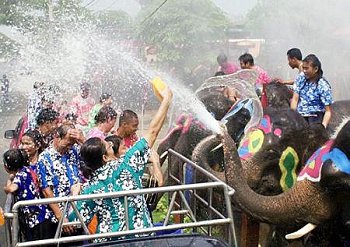 Of all the feasts and festivals in Thailand, which are many, the Songkran Festival is the most striking, for it is widely observed not only in this country but also in Burma, Cambodia and the Lao State.

Songkran is a Sanskrit word in Thai form which means the entry of the sun into any sign of the Zodiac. But the Songkran in this particular instance is when the sun enters the sign of Aries or the Ram. Its full name is Maha Songkran or Major Songkran to distinguish it from the other ones. But the people call it simply the Songkran for it is the only one they know and in which they take interest. It is their traditional New Year when they can enjoy their holidays to the full with no economic hindrance. Songkran is a fixable feast on the solar calender. It begins on the 13th April and ends on the 15th April, but occasionally in certain years on the 16th April. The Songkran is in fact the celebration of the vernal equinox similar to those of the Indian Holi Festival, the Chinese Ching Ming, and the Christian Festival of Easter. The beginning of spring when the sun crosses the equator is now on the 21st of March which is due to the precession of the equinox. The Songkran Festival is in a certain sense like April Fool’s Day, when the maids of the village play pranks on any gallant who happens to pass by their way. He will be caught and bound by the united strength of the maids and they will daub him with blacking.

Information from: “Essays on Cultural Thailand” by Office of the National Culture Commission.