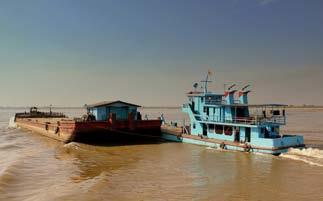 Aiming to improve navigation of two of Myanmar’s major rivers – Ayeyawady and Chindwin, the Government of Myanmar will spend 12 billion Kyats (12.5 million US dollars) on removing sandbank and maintenance of riverbeds and waterways of the two rivers with preventive measures against erosion of the rivers. According to the Directorate of Water Resources and Improvement of River System, the Ayeyawady River is eroding at many places along the river. The directorate is currently repairing places where erosion is most serious and has completed the assessment on the possibility for building four low-head dams on the Ayeyawady River in central Myanmar recently.

Flowing from north to south, the Ayeyawady River has been the key water transport route of Myanmar since ancient times. Of the 12 billion Kyats’ budget, 127 million Kyats will be allocated to the maintenance of Twantay Canal, which is vital for transportation by waterways to and from Yangon and the Ayeyawady delta region in the southwest.

Thick mangrove forests once lined Burma’s coastline, but in the past 30 years over half of the country’s mangrove forests have been destroyed. Mangrove trees, an essential part of river ecosystems, protect the riverbanks from soil erosion by acting as a buffer between the land and sea. Mangroves are also an important natural barrier against floods and storm surges.