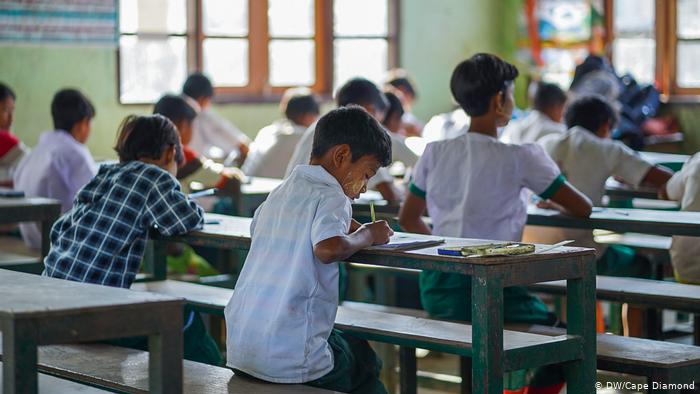 A new school textbook, which features a fictional same-sex couple and young students who find themselves attracted to the opposite sex, has sparked outrage in Myanmar.

The opposition Union Solidarity and Development Party (USDP), Buddhist monks and conservative parents protested the distribution of the book, calling it immoral and a threat to Burmese culture.

The critics demand that the Ministry of Education revise the book’s content, including the country’s Grade 10 “life skills” course curriculum, which includes optional sex education.

In May, the USDP issued a statement arguing that sex education demoralizes Myanmar society and that the LGBT couple featured in the textbook would make students more accepting of same-sex relationships.

“It would not be okay if same-sex case studies are in the textbook as it hasn’t been culturally accepted in our country,” Maung Thynn, a retired Mandalay University rector from Meikhtila Township and a USDP member of parliament, told DW.

While Myanmar has opened up more to the LGBT+ community in recent years, same-sex relations are illegal under a British colonial-era law known as Section 377, which makes same sex punishable with up to 10 years in prison. Human rights groups have said the colonial legislation, although rarely enforced, has systematized homophobia and discrimination in Myanmar.

The subject of sex is still considered a taboo topic in the largely conservative Buddhist-majority country.

“It should be ok if doctors are sharing sex education information with students, but not the teachers. It would be awkward if teachers are teaching it to their students because [it is insensitive to] Myanmar culture,” Thynn said. “We don’t even dare to use the word “condom” in front of our parents and teachers,” he added.

The USDP member’s request to reject the new curriculum content has been rejected by parliament. The education ministry, however, said it would consider revising the life skills curriculum by altering the language used in the course.

“Since then, they don’t want to accept sex education as a textbook topic. They consider the term sex education rude in Burmese society and culture,” Hnoung told DW.

Lack of awareness about reproductive health

Young people make up more than half of Myanmar’s population, with ages 5-14 years compromising the largest age bracket.

According to United Nations Children’s Fund (UNICEF) Myanmar, many young people in the country still have a limited understanding of sexual and reproductive health. Myanmar also has one of Asia’s highest rates of adult HIV.

“Many young girls don’t even know about their individual reproductive health,” Thazin Myint, 21, a recent Yangon University graduate, told DW. Myint, a member of the University Muslim Students Network, said that many people belonging to Myanmar’s minority communities are unaware about sexual and reproductive health.

“Elders are not even willing to talk about it [sexual health] in their family in the Muslim community here,” she said.

Thuta Kyaw, a 20-year-old university student at Yangon’s Dagon University and a student union member, told DW thats his group allows young people to gain health awareness as “the university curriculum does not offer an even sex education.” Some teachers choose to exclude sex education in their life skills teachings.

Sex education has been a controversial subject in the Southeast Asian country for decades. The topic was first introduced in 1998 as part of a UNICEF-supported extracurricular program along with information on HIV, nutrition, and hygiene. In 2016, the government integrated sex education into the life skills subject in schools.

“Those lessons have been in the curriculum for a long time, but only this time they receive criticism. The criticism may be political,” said U Ko Lay Win, the director general of Myanmar’s education ministry.

Win told DW that the recent criticism could be an attempt by the opposition parties to turn the public against Aung San Suu Kyi’s ruling National League for Democracy party as Myanmar heads to the general election in November.

Nevertheless, “we will revise the words and case studies that received criticism from the people who do not like the lessons,” he said.