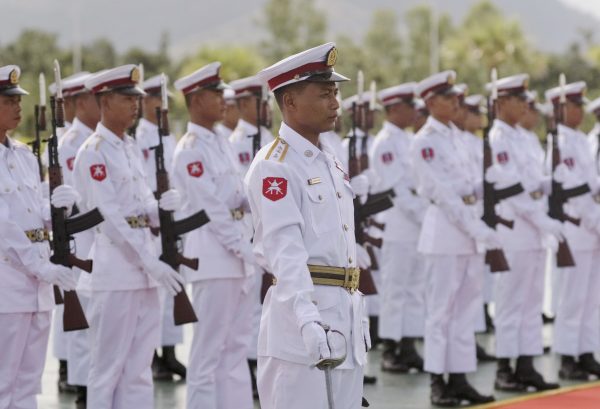 Some of the army’s purchases could well be in violation of a European arms embargo.

Myanmar’s military continues to attempt to acquire European-made equipment in apparent violation of European Union sanctions and embargoes, according to a new report.

An investigation by the Organized Crime and Corruption Reporting Project (OCCRP), published on December 8, reveals that the Tatmadaw, as the country’s military is known, has recently sought to procure equipment made by European companies, as well as Airbus planes from Jordan’s air force.

The report by Jared Ferrie and Timothy McLaughlin, based on leaked military budget documents obtained by Justice For Myanmar, a local activist group, notes that many of these attempted purchases have come since the military’s began to escalate its attacks on the Muslim Rohingya in Rakhine State in 2016. The following August, the army launched a massive “clearance operation” in which it torched villages, shot civilians, and drove more than 700,000 people over the border into Bangladesh.

These violent attacks led the European Union to extend a long-standing arms embargo against Myanmar in 2018. The embargo also prohibits the sale of “dual use” products, which have both civilian and military applications, and restricts the export of any equipment for “monitoring communications.”

The OCCPR report cites arms data from EU reports showing that British companies exported equipment to Myanmar in 2017, while Spanish firms did so in 2015. The purchases are described in such broad terms that it is unclear whether or not they violate EU sanctions, but the leaked budget documents reveal further intended purchases that would likely do so.

Separate documents obtained by Justice For Myanmar show that a Myanmar company, run by a British passport-holder and former airline executive, is facilitating the Tatmadaw’s purchase of two Airbus CASA C295 military transport planes from the Jordanian Air Force. Under the terms of the proposed $38.6 million deal, which is set to be closed this year, the Myanmar company – Aero Sofi Co. Ltd. – will also offers training for pilots at an Airbus facility in Spain.

While mostly used for transport, the CASA C295 aircraft can also be outfitted to deploy paratroopers or serve as a gunships. In a statement released to coincide with the OCCPR’s report, Justice Myanmar claimed that the deal “could cause immense harm to ethnic communities and inflame the brutal civil war raging in Arakan, Kachin, and Shan States.”

While Jordan does not have sanctions against Myanmar, the alleged deal offers an interesting insight into how the Tatmadaw veils its military purchases via the use of intermediaries. It also jars with the publicly stated views of Jordon’s Queen Rania, who has publicly denounced the Myanmar military’s “unimaginable acts of violence” in Rakhine State. “Children have been orphaned, women brutalized, family members butchered, villages burned to the ground,” she said during a visit to a refugee camp in Cox’s Bazar, Bangladesh. “This is something that is unacceptable.”ADVERTISEMENThttps://fe7433690732b97ca6ef93b5d1d111f3.safeframe.googlesyndication.com/safeframe/1-0-37/html/container.html

In addition to these reported acquisitions, OCCPR details a list of miscellaneous Tatmadaw purchases – everything from ammunition and sewing machines to German-made communications software – that may violate the EU’s ban on the export of “dual use” items. The budget documents cite products made by companies in other parts of the world, including radio equipment from Australia, television broadcast equipment from Canada, and bulldozers from the United States.

The report provides further evidence of the military’s continuing centrality to Myanmar’s political economy, nearly a decade after it relinquished its formal hold on power. During the previous half-century of direct military rule, the Tatmadaw succeeded in insinuating itself into the every sector of the country’s economy, from beer to mining.

A recent United Nations investigation into the Tatmadaw’s two large military-owned conglomerates – Myanmar Economic Holdings Limited (MEHL) and the Myanmar Economic Corporation – found that they had 120 subsidiaries – and that was just what the authors of the report could confirm.

The military also retains a privileged perch in Myanmar’s political system, care of the constitution that it forced through a bogus referendum in 2008. This ropes off a quarter of the seats in parliament for military-appointed candidates, giving the Tatmadaw a de facto veto over any constitutional amendments, as well as control of three crucial national security-related ministries. As a result, the government led by State Counselor Aung San Suu Kyi and the National League for Democracy, which won a thundering re-election in polls last month, has been unable to exercise civilian control over the army.

The military’s economic predominance has given it myriad ways of acquiring weapons and other goods through a complex network of intermediaries, which are beholden neither to Myanmar’s civilian government nor the nations that maintain arms embargoes against the country. Another example cited by OCCPR is the case of a helicopter drone acquired from the Austrian firm Schiebel, which the company claims to have sold to an unnamed buyer for the purposes of “monitoring and mapping in mining and road construction.” In 2018, the device later surfaced in videos produced by Myanmar’s navy.

As the authors write, “The Tatmadaw’s broad economic influence, and the difficulty of navigating Myanmar’s bureaucracy, means foreign firms can find themselves dealing with military-linked companies even after conducting due diligence checks.” The report shows how imposing sanctions is easy enough, but enforcing them requires constant vigilance.