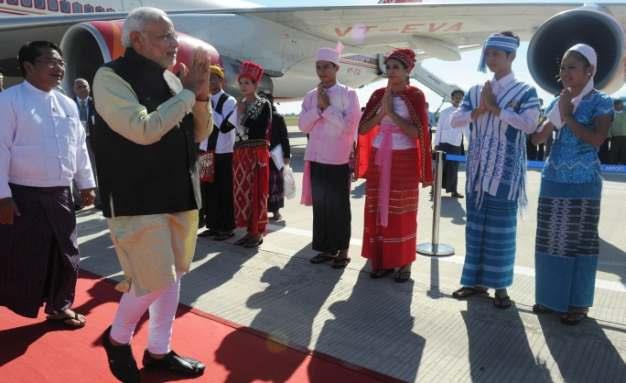 Modi, however, has his task cut out in bridging the growing gap between the potential and reality of India’s partnership with Myanmar. The problem in Delhi is not in the lack of a vision for the future of the relationship, but India’s problems in translating that into practical outcomes over the last two decades.

The hosting of the East Asia Summit in the capital of Myanmar marks an end to the prolonged international isolation of the nation that was once among the richest nations of the region and was at the forefront of imagining post-colonial Asia.In an effort to breakout of the Western pressure, Myanmar joined the Association of South East Asian Nations and began tentative economic reforms.

The two sides also launched cooperation between their security forces to counter insurgencies operating on both sides of the restive land frontier that is 1600 km long. India also stepped up military exchanges with the armed forces of Myanmar. As India unveiled its Look East policy in the early 1990s, Myanmar became quite central to Delhi’s engagement with South East Asia. After all Myanmar is the natural land bridge between India and East Asia.

Given the vast and shared maritime frontier in the Bay of Bengal and southern Myanmar’s location at the nexus between the Indian and Pacific Oceans, the eastern neighbour has also become an important element of India’s new maritime calculus.

Despite the recognition of these massive stakes in Myanmar, there is no denying that Delhi’s performance there has been less than impressive. Bilateral trade remains at a paltry 2 billion dollars. Trans-border connectivity projects have been slow to get off the ground. Indian companies, private and public, have been reluctant to take up projects in the country. For one, India no longer has a privileged access to the markets in Myanmar. It has to compete with global businesses in the country. At the same time, as Thein Sein told the PM, Myanmar wants to take full advantage of India’s prospects for rapid economic growth under Modi. As it diversifies its international relations, India remains an important political partner for Myanmar. The PM’s emphasis on expanding of infrastructure in the North East, promoting connectivity to South East Asia, developing the  huge tourism potential in the region,

especially the Buddhist circuit, and timely implementation of projects do indeed set the stage for a new phase in bilateral relations. Modi has promised President Thein Sein to return to Myanmar on bilateral visit next year. By that time, the PM should have a concrete action plan for a vigorous and sustainable framework for the transformation of the partnership with Nay Pyi Taw.