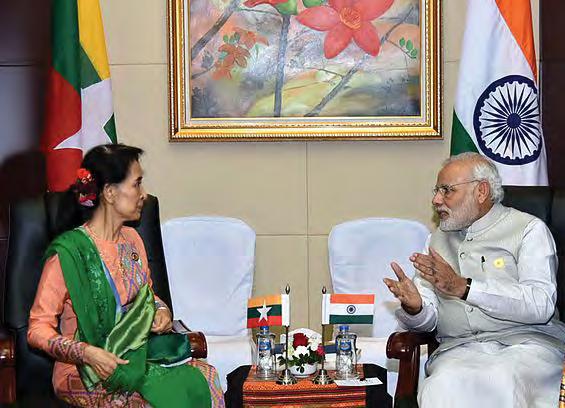 The recent visit by the Indian Prime Minister Mr. Narendra Modi to Myanmar underlined Modi’s ‘Act East’ policy and highlighted the significance that India attaches to fostering good relations with Myanmar. With Myanmar set to walk on the path of development and liberalisation, on the back of the first democratically elected government in 2016, PM Modi’s first official bilateral visit sought to place India as the leading partner of Myanmar and give a much-needed impetus to the relations between
the two countries.

India and Myanmar have long shared historical, ethnic, cultural and religious ties. The geographical proximity (India shares a long land border of over 1600 km and a maritime boundary in the Bay of Bengal) has helped develop cordial relations and people-to-people contact. Ever since the two countries signed a Treaty of Friendship in 1951, there has been a steady rise in the level of engagement and cooperation between them, especially in areas of infrastructure development, trade, security, energy, health, transportation and culture, to name a few.

India realises the importance of Myanmar, not only as a gateway to South-East Asia but as a crucial partner in the fight to end insurgency in India’s north-east. Myanmar is also a crucial member of the ASEAN bloc and it is in India’s interest to have a strong and prosperous Myanmar. Myanmar, too, recognises the potential of this relationship with India and received the Indian Prime Minister with great gusto. The bilateral meeting, though marked by serious hurdles in the form of the Rohingya crisis, turned out to be mutually beneficial, as eight Memorandum of Understanding (MoUs) and three agreements were signed by the two sides, covering important areas of security, infrastructure health, energy, capacity building and culture.

India realises the importance of Myanmar, not only as a gateway to South-East Asia but as a crucial partner in the fight to end insurgency in India’s north-east. Myanmar is also a crucial member of the ASEAN bloc and it is in India’s interest to have a strong and prosperous Myanmar. Myanmar, too, recognises the potential of this relationship with India and received the Indian Prime Minister with great gusto. The bilateral meeting, though marked by serious hurdles in the form of the Rohingya crisis, turned out to be mutually beneficial, as eight Memorandum of Understanding (MoUs) and three agreements were signed by the two sides, covering important areas of security, infrastructure health, energy, capacity building and culture.

PM Modi reiterated India’s commitment to support Myanmar in building infrastructure and developing human resources capacity. Some of the projects, which directly involve India are:

Along with these, several other projects have been agreed upon by both the countries in IT, health, entrepreneurship, language training and small border area development projects in Chin and Naga areas of Myanmar. India has also extended $750 million in soft lines of credit for other infrastructure projects.

India’s trade with Myanmar grew by 6 per cent from US $2.05 billion in 2015-16 to US $2.18 billion in 2016-17. Both countries sought to work closely with each other to realise the tremendous potential, especially given the favourable environment for investment offered by the new democratically elected regime in Myanmar.

In their joint statement, the two countries acknowledged the importance of pulses in the bilateral trade basket. India imports around a million tonnes of pulses, $1 billion in value, from Myanmar. It is vital to Myanmar’s farmers, therefore Myanmar requested India to lift all restrictions imposed on imports from Myanmar. Myanmar has also welcomed India’s participation in its energy sector and invited Indian companies to take part in tenders for petrochemicals and petroleum products, marketing infrastructure and setting up of LPG terminals. The agreement between Numaligarh Refinery of India and Parami Energy Group of Myanmar on supply of diesel to Myanmar across the land border will give people of north Myanmar cheaper and more reliable access to petroleum products. In the energy sector too, India offered its technical and project specific assistance, for instance, it offered to conduct a solar radiation resource assessment in Myanmar, it shared its experiences in power trade and discussed ways to cooperate in the field of energy efficiency between the two countries.

India’s increasing investments in Myanmar also assume importance, in the light of Chinese interest in Myanmar. China has, in recent times, increased its presence in Myanmar and is even pushing for a special economic zone at KyaukPhyu among other projects.

Given the close cultural and religious ties the people of the two countries share, culture is bound to be an important thrust area, as was highlighted in the visit of PM Modi. The two sides signed the Cultural Exchange Programme (CEP) for the period 2017-20 and expressed confidence that this would promote cultural exchanges between Myanmar and the North-Eastern states of India. PM Modi also visited Bagan, where the Archaeological Survey of India has restored the Ananda Temple and is involved in the restoration and conservation of 92 pagodas and structures damaged by the 2016 earthquake.

Religion forms a big part of the cultural heritage of the two countries. Bodh Gaya in India remains a place of pilgrimage for the people of Myanmar. Myanmar welcomed India’s efforts in preserving the stone inscriptions and temples of King Mindon and King Bagyidaw of Myanmar in Bodh Gaya.

Another gesture that was praised and welcomed by both the Government and the people of Myanmar, was India’s decision to grant special pardon to 40 Myanmar nationals undergoing imprisonment for various crimes in India.

Former Prime Minister of India, Dr. Manmohan Singh, on his visit to Myanmar in 2012, observed that “India and Myanmar are natural partners, linked by geography and history.” With PM Modi’s emphasis on developing relations with India’s neighbours, both countries are likely to work in unison to ensure enhanced people to people contact and a healthy environment for development.

The 1643 km long land border that the two countries share and the belligerent posturing by China necessitates close cooperation between India and Myanmar, vis-à-vis security and defence. This formed an important facet of the discussions held among the leaders of the two sides. Terrorism and extremist-inspired violence remain a cause of concern, to counter which, both countries have affirmed their intent to work together. The two sides condemned terrorist attacks on Amarnath Yatra and the Rakhine State, and jointly called for the quick adoption of a Comprehensive Convention on International Terrorism by the UN General Assembly.

Mr. Modi’s government recently inked a US $37.9 million-worth lightweight torpedo with Myanmar. India has also begun supplying arms and communication equipment to the Armed Forces of Myanmar, to secure the sensitive border. The two sides also signed an MoU to strengthen maritime security cooperation, even in non-traditional security domains, such as “humanitarian assistance and disaster relief, which are critical for safeguarding the Bay of Bengal and the Indian Ocean.”

Indian army is engaged in providing training to the Myanmar army to prepare them for UN peace keeping duties, a step considered essential to redeem their global image.

Myanmar, on its part, reaffirmed “its respect of the sovereignty and territorial integrity of India” and upheld the policy of “not allowing any insurgent group to utilise Myanmar’s soil to undertake hostile acts against the Indian Government.”

Even as India and Myanmar look to scale up their engagement, the two countries need to quickly tackle the crisis of Rohingya Muslims before it escalates into a dangerous catastrophe. PM Modi expressed his concern over the extremist violence in Rakhine and offered to fast track development projects in the troubles province of Rakhine.

At a time when State Counsellor Aung San Suu Kyi has come under pressure over the Rohingya crisis, PM Modi’s strong stand on the issue and support of the Myanmar government, resonated well with Myanmar. PM Modi’s government has itself taken a strong stand on the influx of about 40,000 Rohingyas over the years, threatening to deport them, as it views them as a big security threat.

The recent crisis, triggered by coordinated attacks by Rohingya militants on 25-26 August, under a recently formed Arakan Rohingya Salvation Army (now designated as “terrorists”) against government and security outposts in northern Rakhine, left 110 dead, including militants, security personnel and civilians. In response, state security forces launched ‘clearance operations’ to neutralise militants and recapture seized weapons and territory. If reports are to be believed, around 270,000 Rohingyas have fled to Bangladesh, triggering a massive humanitarian crisis in the Subcontinent.

The international community has come down heavily on the Myanmar government, in what they view as ‘ethical cleansing’ and crimes against humanity. Aung San Suu Kyi has defended her handling of the crisis and said that those attacked were Jihadists and that the military action was necessary to ensure security against the extremist elements.

The transition of Myanmar into a democratic state with a democratically elected government provides an ideal opportunity to India to engage with its neighbour in a mutually beneficial arrangement. It provides fresh impetus to PM Modi’s ‘Act East’ Policy and offers a counter-narrative to China’s increasingly bullish position in the Subcontinent. Myanmar, too, stands to gain immensely through this partnership, based on the spirit of cooperation, trust and rooted in shared historical, cultural, religious and ethnic ties. The visit by PM Modi has only reaffirmed this and it bodes well for the future of India-Myanmar relations.