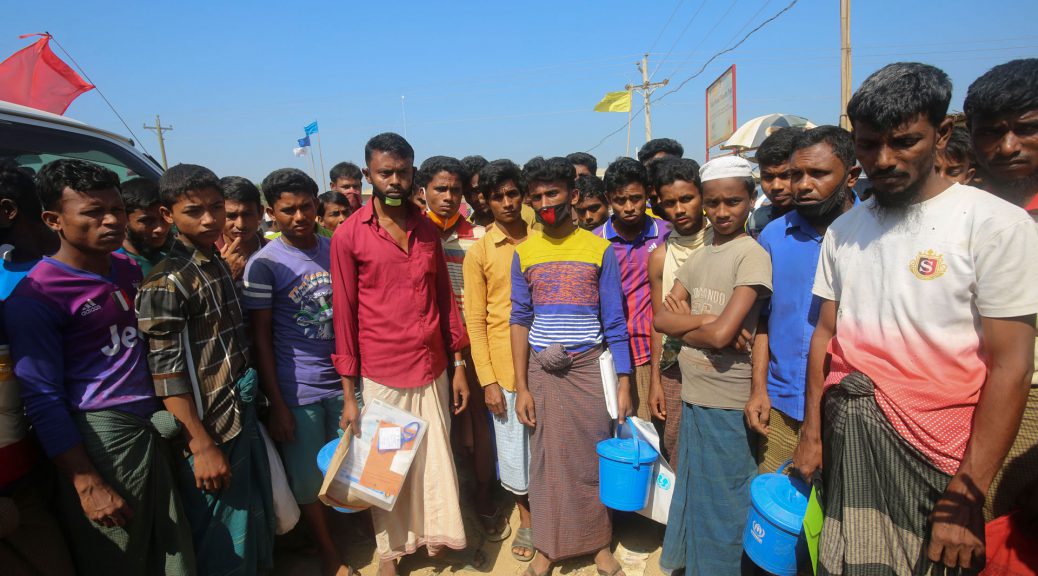 This is what life is like for the 130,000 internally displaced Rohingyas trapped in detention camps in central Rakhine state in Myanmar: in the camps, they have no future, with little access to land or livelihoods. They depend on foreign aid supplies and die of treatable diseases because of limited access to healthcare. Shelters, built in 2012 to last two years, have deteriorated. Most children can only attend basic classes at temporary learning spaces.

Burmese authorities are using Covid-19 response measures as a pretext to harass and extort Rohingyas and are doubling down on a system in which they are already effectively incarcerating the population. Rohingyas in the camps told Human Rights Watch that military and police forces regularly subject them to harassing physical punishment at checkpoints. One Rohingya woman said the police made her do sit-ups for 30 minutes for not wearing a mask through a checkpoint, after which she was too exhausted to move. Another man witnessed people being forced to perform squats at a checkpoint with their hands on their ears.

Last week, the government of Myanmar delivered its much-anticipated first report to the International Court of Justice (ICJ) – following the court’s unanimous January 23 provisional measures order – explaining what it has done to protect the 600,000 ethnic Rohingyas in Rakhine state, whom a United Nations-backed fact-finding body said remain under threat of genocide.

The reality on the ground for the Rohingyas is dire: “oppressive and systemic restrictions” imposed on those remaining in Rakhine state, which may be indicative of ongoing genocide. The government established the camps following a campaign of ethnic cleansing and crimes against humanity against Rohingyas in central Rakhine state in 2012. Almost eight years later, they remain in de facto detention camps surrounded by fences, police, and military.

Myanmar has a long history of creating hollow committees and commissions to appease critics, thwart genuine international scrutiny, and diffuse pressure to reform. But the ICJ’s judges made clear that Myanmar must show “concrete measures aimed specifically at recognizing and ensuring the right of the Rohingya to exist as a protected group under the Genocide Convention.”

In recent interviews with Human Rights Watch, displaced Rohingyas in the Sittwe camps described a familiar array of social distancing requirements, frequent handwashing, and mask wearing, all of which also apply to the general population of Myanmar. The consequences for noncompliance are less familiar.

A Rohingya woman told us that Rohingyas are not allowed to cross Sittwe checkpoints without a mask and are fined or receive ad hoc punishments if they aren’t wearing one. Yet the authorities have not provided enough face masks to Rohingyas in the camps. Several camp residents told us that an entire family must share a mask because they could not afford to buy one for each family member.

There is no guarantee that following the Covid-19 rules protects people from extortion. One Rohingya man said, “Police fine people even though they are wearing a mask…they took the money from a man’s pocket, like 20,000” kyat ($14) – a sizeable sum considering many displaced people only receive approximately 15,000 kyat ($11) per month from the UN World Food Program in lieu of food rations.

Rakhine state, one of the poorest in Myanmar, is ill-prepared to handle a Covid-19 outbreak, but the health risks are even higher for displaced Rohingyas in overcrowded and squalid camps. Those in need of medical referrals to Sittwe General Hospital struggle to obtain permission to leave the camps, even in urgent cases. One Rohingya man said that a township official told him that “If people are affected [by Covid-19], you have to get treatment in the camps. They will not be allowed to the hospital.”

But the camps neither have Covid-19 testing nor the capacity to address complex medical cases. This failure to provide an adequate health response is underlined by Myanmar’s nationwide “Action Plan for the Control of Covid-19 Outbreak at IDP Camps,” which does not include testing or plans for the country’s internally displaced people.

Myanmar may point to its recent presidential directives aimed at preventing genocide, preserving evidence, and deterring hate speech as signs of progress in carrying out the ICJ’s order.

But donor governments, the UN, and others wondering about Myanmar’s compliance with the court’s provisional measures order should consider this: The tightening restrictions and increased scope for extortion mean that if Rohingyas need treatment for Covid-19, they may have to forgo food to buy a mask.

Even with a mask, they may still undergo harassment, fines, and physical punishment at multiple checkpoints, only to find that the main clinic in the camps – the only place they can get medical assistance – cannot test them or provide adequate care. Against the backdrop of the pandemic, as well as the fighting between government forces and ethnic armed groups across Rakhine state, threats to the lives and liberty of the Rohingyas remaining in Myanmar are only increasing.

Compliance with the ICJ’s order means Myanmar urgently needs to take real steps to dismantle the oppressive framework that has targeted the remaining Rohingyas inside Rakhine state and promote and protect the rights that they have long been denied. Anything less would be contributing to the Rohingyas’ destruction.