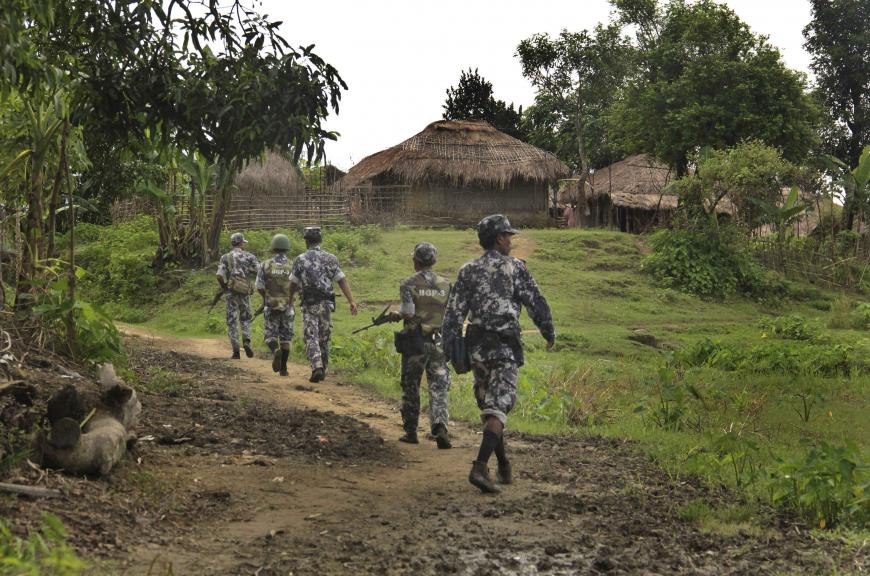 End Assistance to All Military-Controlled Entities

(Tokyo) – The Japanese government should immediately cancel plans to donate money to purchase vehicles and communications equipment for the Myanmar police force, Human Rights Watch said today. The police force, which operates under the auspices of the military, outside the control of the civilian government, has a well-documented record of serious human rights violations.

On July 2, 2020, Japan’s Foreign Ministry announced a grant of 100 million yen (US$930,000) to the Myanmar police for the purpose of purchasing vehicles and wireless equipment for “protecting dignitaries.” The Foreign Ministry claimed the donations would “strengthen the Myanmar police’s ability to carry out public security measures,” create “social stability,” and contribute to Myanmar’s “socio-economic development.”

“It’s inexplicable that the Japanese government would try to curry favor with Myanmar’s abusive security apparatus by providing financial assistance to the police,” said Brad Adams, Asia director. “Instead of supporting Myanmar’s police, Japan should be helping the victims of rights abuses and ethnic cleansing by working with other donor governments to hold the security forces accountable.”

Myanmar’s police acted as a pillar of repression during Myanmar’s 50 years of military rule, arbitrarily arresting dissidents and student activists, engaging in widespread torture, and creating a climate of fear in the country, Human Rights Watch said. The police remain abusive and unconstrained, in large part because the military-drafted constitution maintains military control of the police. The police operate under the authority of the Home Ministry, which is led by a minister who the constitution mandates must be a serving military officer, and operates under the de facto control of the military.

In recent years, the police have engaged in joint operations with the military, carrying out atrocities, including crimes against humanity, against ethnic Rohingya in Rakhine State in 2012, 2016, and 2017. The Myanmar police force, Border Guard Police, and security police battalions accompanied the military in so-called clearance operations that resulted in mass killings, rape, and arson. Police involvement was documented during the deadliest incidents in August and September 2017, including the massacres at Tula Toli and Gu Dar Pyin, where hundreds of Rohingya were killed.

Police took part in widespread rape, including gang rape, of Rohingya women and girls, as well as killing children while their mothers were being attacked. A woman from Zay Di Pyin, Rathedaung Township told the United Nations-backed Fact-Finding Mission on Myanmar: “I don’t know how many policemen raped me, it was not my priority. The only thing I can remember is that they were trying to take my children. They dragged my son from under the bed. I was screaming to protect my children. I have not seen my son again.” In several villages, security forces abducted women and girls and took them to police and military compounds where they were gang raped.

In Rakhine State, the Myanmar police operate the majority of checkpoints, which play a central role in the severe violation of Rohingya freedom of movement in the state. Police enforce an extensive system of extortion, as well as physical harassment at checkpoints, that sustains the Rohingya’s arbitrary confinement to villages and detention camps. Human Rights Watch and other groups have documented torture by police, including the Border Guard Police, against Rohingya who have been arbitrarily detained.

Myanmar police have responded to criticism and protests with arbitrary arrests and excessive and unnecessary force. In 2017, a Reuters investigation into the massacre of 10 Rohingya in Inn Din village prompted Myanmar police to entrap and arrest 2 of the news agency’s reporters. Security police officers told Reuters they took part in raids in the village on orders from the military.

In January 2018, police shot and killed seven ethnic Rakhine protesters among a crowd that had converged at a local government building in Mrauk U after authorities shut down an event.

The police have also been implicated in excessive use of force elsewhere in the country. In April 2020, a video showed police beating a man in Mandalay for violating curfew orders during the Covid-19 pandemic. In February 2019, police fired rubber bullets and a water cannon at ethnic Karenni youth protesting the installation of a statue honoring Myanmar’s independence leader, General Aung San. At least 20 protesters were injured as they attempted to move beyond police barricades.

In response to Human Rights Watch’s inquiry of whether the Japanese government has conducted human rights due diligence to make sure that the aid won’t be used for further human rights violations, the Japanese Foreign Ministry said it has “confirmed with the Myanmar government that this aid be used and maintained for said purposes in an appropriate, effective, and exclusionary manner.” The Foreign Ministry also stated Japan’s embassy in Myanmar will monitor whether the equipment is being used appropriately.

The Japanese government should suspend all aid to the Myanmar police until systematic reforms are carried out and the police are put under civilian control. Japan should also halt aid to all military-controlled entities and ministries, including the Home Ministry.

“The Japanese government should realize that giving shiny new equipment to Myanmar’s police won’t make them less abusive,” Adams said. “By conferring undeserved legitimacy on the Myanmar police, they are signaling to Myanmar’s people that their suffering is of little concern.”