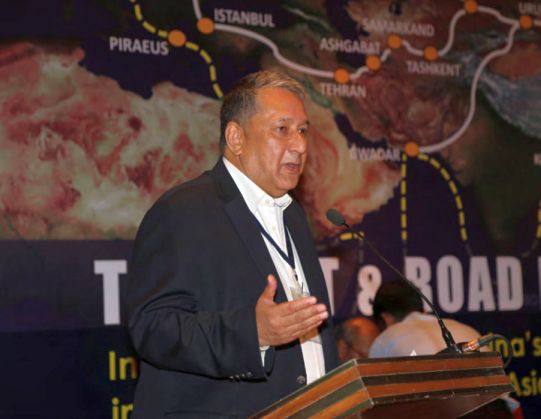 Ideas and Action for a Better India
THE BELT & ROAD INITIATIVE Good afternoon Ladies and Gentlemen, I am indeed grateful to Observer Research Foundation and Mr. Sudheendra Kulkarni for giving me the opportunity to speak at the plenary session on Regional Dynamics of Belt & Road Initiative.

I would also like to welcome my co-speakers Dr. Ren Jia from China, Dr. Abid Q Suleri from Pakistan, Dr. Sreeradha Datta from India and my friend, Ambassador Tariq Karim from Bangladesh.

Executive Summary
China’s Belt and Road Initiative also known as One Belt One Road (OBOR), is one of President Xi’s most ambitious foreign and economic policies. It aims to strengthen Beijing’s economic leadership through a vast program of building infrastructure throughout China’s neighbouring regions. Many foreign policy analysts view this initiative largely through a geopolitical lens, seeing it as Beijing’s attempt to gain political leverage over its neighbours. There is no doubt that this is part of Beijing’s strategic calculation. However, this analysis argues that some of the key drivers behind OBOR are largely motivated by China’s pressing economic concerns.

All levels of the Chinese Government, from the national economic planning agency to provincial universities, are scrambling to get involved in OBOR. Nearly every province in China has developed its own plan to complement the national blueprint. Major state-owned policy and commercial banks have announced generous funding plans to fulfill President Xi’s ambitious vision.

Xi launched this at a time when Chinese foreign policy has become more assertive. This plan seems to have geopolitical undercurrents to it than a purely economic interest.

Admittedly, analysists are of the view that China’s industrial policy shall be impacted by obscuring economic means to geopolitical concerns. GEOSTRATEGY OR GEOECONOMICS?
Before the 18th Party Congress in 2013, there were heated debates among Chinese policymakers and scholars about the strategic direction of the country’s foreign policy, especially in its neighbourhood. In October 2013 Beijing convened an important work conference on ‘peripheral diplomacy’. It was reportedly the first major foreign policy meeting since 2006 and the first-ever meeting on policy towards neighbouring countries since the founding of the People’s Republic. It was attended by most of the important players in the Chinese foreign policymaking process, including the entire Standing Committee of the politburo.

The well-known geopolitical theorist, Halford Mackinder, postulated drainage and impenetrable by sea power was destined to be the “Pivot Area” of world politics. It was his view that the rule over the heart of the world’s greatest landmass would become the basis for world domination, owing to the superiority of rail over ships in terms of time and reach. Russia and China, if they came together, he predicted, could outflank the maritime world. Of course, the course of the First World War led him in later years to modify his initial perspective. In looking at the shape of the post-World War II order, he foresaw a world geopolitically balanced between a combination of the North Atlantic, or what he termed as Midland Ocean and the Asian heartland powers. In effect, he conceded that geopolitical dominance required both a continental as well as a maritime dimension. The later geopolitical theorist, Alfred Mahan, too had a Eurasian centred global perspective, but his emphasis was on maritime power, mediating between a twofold global framework, a Western and an Oriental system.

Both the Road and the Belt include regional loops and branches which extend the reach of the emerging transportation networks but also serve to tie the Road to the Belt at critical points. Thus the China-Pakistan Economic Corridor is significant precisely because the port of Gwadar is one of the points where the Road and the Belt intersect. Of interest to India is the branch constituted by the BCIM corridor, which proposes to connect Yunnan in southern China with Myanmar, Bangladesh and eastern India.

GEOECONOMICS
The problem with narrow geostrategic interpretations of OBOR is not that they are wrong but that they are incomplete. Many analysts tend to overstate geostrategic dimensions of the project, while under appreciating the economic agenda of OBOR. The two goals are not, in fact, contradictory. China is using OBOR to assert its regional leadership through a vast program of economic integration. Its aim is to create a regional production chain, within which China would be a centre of advanced manufacturing and innovation, and the standard setter.

“A systematic project which should be jointly built through consultation to meet the interests of all and effort should be made to integrate the development strategies of the countries along the Belt and the Road.” China has taken advantage of the Greek economic crisis to establish itself at the strategic port of Piraeus. The Chinese Shipping Company, COSCO, has a 35-year concession to expand the port by adding 2 modern container terminals. It is likely to bid for the 67% Greek government stake in the port when it is fully privatized. Greek shipping tonnage is one of the largest in the world and most ships for Greek Shipping lines are built in China, which has the world’s largest ship building industry. Piraeus will thus serve as a major logistics hub for Chinese trade with Europe. China is planning a Land Sea Express which will link Piraeus with points on the European mainland. A US $2.5 billion project is envisaged to build a key high speed rail link from Piraeus to Western Europe.

This aspect is important because it could and it probably already has weakened the trans-Atlantic alliance which has been a stable and predictable feature of geopolitics since the end of the Cold War. The U.K. rush to join the AIIB followed by several other European powers, against U.S. opposition, was a clear indication of this emerging trend. The longer it takes for the T-TIP to be actualized, the greater the chances of China’s Eurasian project succeeding. Interestingly, Cohen foresaw a time when India, like China, could carve out a fourth geostrategic realm also continental and maritime in nature. This it would do by dominating the eastern and western reaches of the Indian Ocean and the sub-continental landmass, south of Eurasia but linked to it. If this were indeed possible then India would have an opportunity to deal with the challenge of the Chinese geo-strategic realm on its doorstep with greater room for manoeuvre. I have argued before and wish to restate again: If there is one country which has the potential to catch up with China and even overtake it, it is only India. The current asymmetry is not written in stone. What will it take India to achieve this long-term goal is well-known and I will not repeat it. Currently, India has neither the resources nor the political and economic weight to put in place competitive and alternative connectivity networks on a global scale. Therefore, for the time being it may be worthwhile to carefully evaluate those components which may, in fact, improve India’s own connectivity to major markets and resource supplies and become participants in them just as we have chosen to do with the AIIB and the NDB. For example, building a road or rail link to Central Asia through Iran using the port of Chahbahar could then use Chinese built routes to access Central Asian and Russian destinations as well as Europe. It may be more important to deploy our limited resources to build the Indian Ocean network of ports, with connecting highways and rail routes such as exemplified by the planned Mekong-Ganga corridor and the Sittwe- Mizoram multi-modal transport corridor. There have been longstanding plans to develop the deep water port on Sri Lanka’s eastern coast, Trincomalee, as a major energy and transport hub and yet despite the warning message in the shape of Chinese building the Hambantota port in southern Sri Lanka, and expanding the Colombo port, virtually no work has been undertaken since Indian Oil acquired the tank farm located at the port. The Andaman and Nicobar Islands lie at the very centre of the Bay of Bengal and could be developed to serve as a regional shipping hub for the littoral states and beyond. And yet, these islands continue to be treated as a distant outpost rather leveraging their unique location at the very centre of one of the most strategic stretches of ocean space.

It is fair to say that China, in deploying the OBOR initiative, has demonstrated a level of ambition and imagination, which is mostly absent in India’s national discourse. It is my earnest hope that the presentations that are made today will help both scholars and practitioners to think and act strategically on issues such as OBOR which will have a significant impact on India’s vital interests.

CONCLUSION
OBOR is President Xi’s most ambitious foreign and economic policy initiative. Much of the recent discussion has concerned the geopolitical aspects of the initiative. There is little doubt that the overarching objective of the initiative is helping China to achieve geopolitical goals by economically binding China’s neighbouring countries more closely to Beijing. But there are many more concrete and economic objectives behind OBOR that should not be obscured
by a focus on strategy.

The most achievable of OBOR’s goals and social influence will be its contribution to upgrading China’s manufacturing capabilities. Given Beijing’s ability to finance projects and its leverage over recipients of these loans, China’s high-end industrial goods such as high-speed rail, power generation equipment, and telecommunications equipment are likely to be used widely in OBOR countries. More questionable, however, is whether China’s neighbours will be willing to absorb its excess industrial capacity. The lack of political trust between China and some of our countries, as well as instability and security threats in others, are considerable obstacles.

Chinese bankers are likely to play a key role in determining the success of OBOR. Though they have expressed their public support for President Xi’s grand vision, some have urged caution both publicly and in private.

Their appetite to fund projects and ability to handle the complex investment environment beyond China’s border will shape the speed and the scale of OBOR. There is a general recognition that this initiative will be a decade-long undertaking and many are treading carefully.

The distinguished speakers of my panel from China, Pakistan, India and Bangladesh, I am sure, will highlight the plenary session with detailed up scaling and possible down scaling even more specifically.