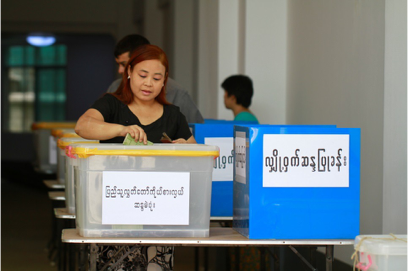 National League for Democracy (NLD), headed by Aung San Suu Kyi, has heralded a new chapter in Myanmar by scoring a historic landslide victory in the current elections. Even before the results were officially declared NLD was expected to win as the polls showed NLD leading in most of the places. The initial result declaration confirmed this as NLD won 49 out of 54 regional seats and 145 out of the total 160 seats. The election has seen a very good turnout with 80 percent of the voters participating in the polls and NLD has been able to bag nearly 70 percent of these votes. Final election results were declared on 13 November 2015 by the Union Election Commission and they made it absolutely clear that NLD has won these elections.

The final announced results stated that the NLD has won 77.1 percent or 881 of the total 1150 contested seats. This provides NLD way beyond the 50% + 1 seats that the party needed to claim majority in the National Assembly. This victory puts NLD in a very strong position and makes it fully capable of choosing the next President of Myanmar.  The party will also be able to control over national legislation and also the passing of bills. Most people would like to see Aung San Suu Kyi take up the Presidential role but that won’t be possible. This is because Myanmar’s constitution does not allow a person with a foreign spouse to hold that seat and Aung San Suu Kyi‘s husband was a British national. How the results of this election will actually shape the future of Myanmar’s politics is yet to be seen but most people are feeling joyous and optimistic about this new change that has taken place in the Myanmar political scene. The military government that was in power for the last many decades did hand over the power to a semi-civilian government in 2011, but in many ways the army still has a lot of power and dominates politics. Twenty-five percent of seats in parliament are reserved for the army. Now while Aung San Suu Kyi will not be able to become a president herself she still can make a huge contribution towards the progress and betterment of Myanmar.

Aung San Suu Kyi does not need necessarily need to a presidential label in order to bring out the positive changes that she has fought to bring about for so long. She can and hopefully will continue to serve as the guiding light taking Myanmar towards a more democratic, happier, and prosperous future. This win and even the conditions that led to Myanmar’s shift from Military rule towards democracy is the direct result of Aung San Suu Kyi’s decades of struggle. She, along with many other fighting for the cause of democracy, have made huge sacrifices and suffered a great deal in order to make this day a reality. The current election results mark a happy day for all the people of Myanmar. We stand along with them while sharing their joy and wishing Myanmar a wonderful future ahead.

Myanmar Matters congratulates Aung San Suu Kyi for the splendid victory of NLD in the elections. We also congratulate the Army Generals for enabling and guiding Myanmar towards this next step in becoming a complete democracy.