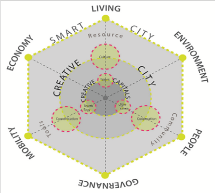 It’s a moment of pride and glory for the nine north-eastern states of India to be chosen for Smart Cities’ Project- an initiative of the Narendra Modi Government. On road to improve the lives of citizens, the smart city project focusses on the essentials of sustainability, inclusivity, decent infrastructural capacity and an enriched quality of life for all its citizens.

The nine North-Eastern states that have been made part of this project include- Pasighat and Itanagar (Arunachal Pradesh), Guwahati (Assam), Imphal (Manipur), Gangtok and Namchi (Sikkim), Aizawl (Mizoram), Kohima (Nagaland), and Agartala (Tripura).

Talking about the major projects being taken up, now as an integral part of the Smart Cities Mission, Union Minister of State for Housing and Urban Affairs Mr. Hardeep Singh Puri stated, “The Brahmaputra Riverfront development project alone cost Rs. 826 crores and there are 24 out of 464 projects costing Rs. 3,706.05 crores that can be rendered as impactful.”

Aizawl’s entry to the Smart Cities list will enable its urban mobility to improve, leading to decongestion on roads by way of multi-level car parking and ICT-based public service delivery. Known for being the first state advocating ‘no honking policy’ in India this move hopes to support Aizawl’s urban planning scenario in an enhanced and sustainable manner.

Under the Smart Cities Mission, the city of Namchi would be catered with an Integrated Water Supply and Distribution System, apart from attending to its tourism and traffic management development. For the capital city of Sikkim, Joint Chief Town Planner, Nodal Officer- Smart Cities Mission, Urban Development and Housing Department, Government of Sikkim Mr. Navin Rai commented, “Gangtok is also working on an effective solid waste collection and management. The focus is also on the development of existing pedestrian walkways retrofitting with universal access design features and appropriate streetlights.”

Nagaland’s capital Kohima suffered from connectivity and topographical conditions, restraining it from being called a smart city. However, Central Government’s allocation of Rs.1,800 crores in supporting it become one has been admitted quite enthusiastically by the Prime Minister of India Mr. Narendra Modi. Being inducted in the Smart Cities list in 2015, Imphal has been doled out an assistance of Rs. 106 crores by the Central Government.

An international interest has been shown in developing the city of Guwahati. South Korea would be investing in the city to turn it into a smart city. Under the Smart City Mission, urban flooding and congested traffic system in the city of Guwahati is intended to be managed, with the central assistance of Rs. 2,293.35 crores.

The capital city of Tripura is devoted to impart enriched quality of life to its citizens by preparing for infrastructural capacities through the support of this mission. LED lighting, disaster management and solid management are being taken care of in the initial phase of the Smart City project.

In line with the Centre’s ‘Act East Policy’, these north-eastern states would benefit from development opportunities, with massive investment and employment prospects. Being included as one of the 100 cities selected for smart cities mission, funds of Rs. 14,124 crores for 464 projects have been stipulated for their development.