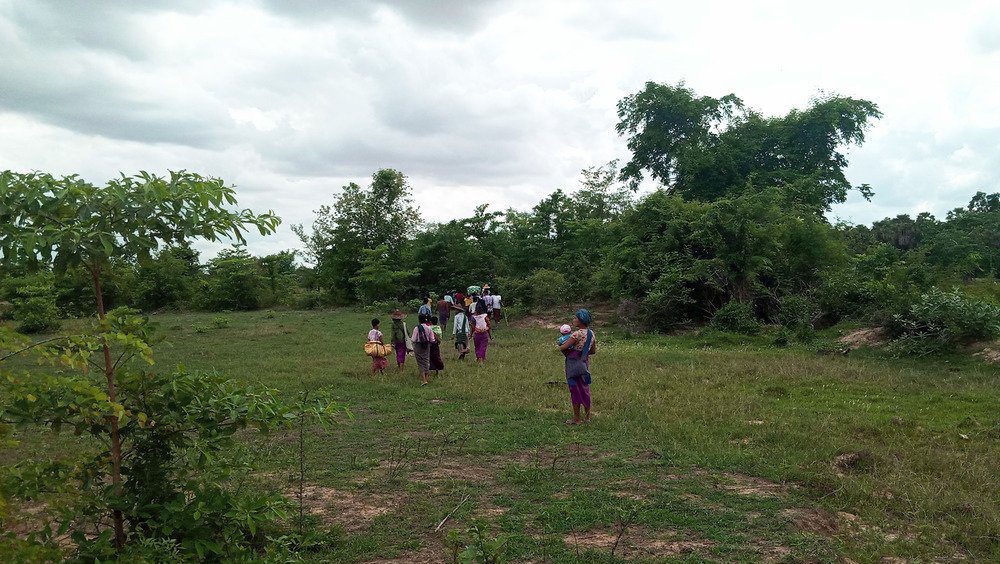 Khin, a 59-year-old rice farmer, faced a distressing choice at the height of Myanmar’s monsoon season three months ago: sell a cow, a prized asset for agricultural households, or go hungry.

She sold the animal for half its value. The proceeds went to buy food for her family and inputs for her small rice farm in the Dry Zone – a drought-prone region in the country’s centre where farmers and agricultural experts say falling income and rising costs are worsening hunger.

“We’re just eating whatever is available,” Khin told The New Humanitarian by phone.

Months after the 1 February military coup, poverty and food insecurity are soaring in Myanmar’s Dry Zone and Ayeyarwady Delta regions – the country’s agricultural heartland – sparking warnings of a hidden crisis in the making as farming households struggle out of view of most humanitarian aid plans.

Khin blames her family’s plight on political instability since the coup and a devastating third wave of the COVID-19 pandemic. Costs for critical inputs such as fertiliser have soared, but crop prices have fallen.

“I’m very worried because I have no idea where to go or how to survive if things worsen,” she said. “Other farmers are in the same boat.”

The coup has upended lives across the country, exacerbated its numerous conflicts, and sent the economy into free fall. The Asian Development Bank recently predicted Myanmar’s GDP would shrink by 18.4 percent this year. The currency lost 60 percent of its value in September, Reuters reported, putting even more pressure on food and fuel prices.

The economic crash is worsening food insecurity across the country. However, the Dry Zone and Delta regions are traditionally off the aid radar, mainly because they are not in border conflict zones where humanitarian needs have typically been the most pressing.

Yet poverty is rapidly rising. The percentage of Delta households considered “extremely poor” rose from 18 percent last year to 30 percent in July, according to the Washington-based International Food Policy Research Institute (IFPRI). A recent paper predicts that 60 percent of Myanmar’s “newly poor households” in the coming months will be in the Dry Zone and Delta.

“Aid agencies are still mostly working in more remote conflict-affected areas, albeit with some shift to urban populations obviously made poorer by COVID and the political situation,” said Derek Headey, a senior research fellow at the institute.

“But there is a lot of new poverty in the Delta and Dry Zone too, and these are major agricultural production centres and large population areas. So we’re very concerned there’s an emerging crisis in these zones that’s going under the radar.”

In interviews with The New Humanitarian, nearly a dozen Myanmar Delta or Dry Zone farmers, or aid staff who work in these areas, said that families were dipping into savings and selling long-term assets to make ends meet.

Some farmers said they’re not sure how they will continue to feed themselves over the long term. Many are taking on greater debt, while cutting back on food.

“Rising input prices and falling output crop prices [are] a double whammy that is squeezing farmers tighter and tighter,” said a Myanmar development worker who has spoken to hundreds of farmers since the coup.

Myanmar farmers and aid workers who spoke to The New Humanitarian requested that their full names not be used for fear of the military.

The Dry Zone and Delta regions are crucial for Myanmar’s overall food security, accounting for more than 80 percent of Myanmar’s cropped area, according to IFPRI. The two areas together account for about a third of Myanmar’s population.

But in the coup’s aftermath, more farming families are joining the ranks of the newly poor.

Aung, 45, who grows rice, maize, and pulses in the fertile Ayeyarwady Delta in the country’s south, said farmers are squeezed because traditional sources of credit – such as seed and fertiliser companies and banks – are not available.

“We can’t get loans or borrow money, which means you have to sell what you have. So we have to be very frugal,” he said. “Everything is more difficult this year.”

Kyaw, a 49-year-old farmer in Sagaing Region, part of the Dry Zone, said he has resorted to pawning and selling his wife’s jewellery to buy food for his family of eight.

“We’ve been surviving by farming and working as hired labour, but it’s not enough,” he said. “We’re now using up leftover rice from the previous years, and our savings and gold.”

Others have it worse, he added: “In some homes, they no longer have old stocks of rice left. We are trying to help each other.”

Analysts say there is an urgent need to expand food assistance to rural families in the Dry Zone and Delta.

Stephen Anderson, Myanmar country director for the World Food Programme, said the UN agency is trying to find out more about the situation in these major farming regions.

“We would be ready to step in in those instances where we see acute food insecurity developing. If there are needs, we’re ready to consider them,” he said.

As in many aid operations, however, donor funding has fallen short.

“We’ve received more funding now than we had in all of last year, it’s just that the needs are outstripping the available funding,” Anderson said.

Violence and the coronavirus

Humanitarian needs are growing in areas that have typically been spared the brunt of Myanmar’s conflicts, but post-coup violence is still escalating.

In some areas, there are regular clashes between the junta’s troops and local resistance forces who have teamed up with ethnic armed groups that have been fighting for autonomy for decades. Bombings and targeted assassinations in major towns and cities are becoming more common.

Kyaw, the 49-year-old farmer, said soldiers have been raiding many villages in his part of Sagaing, looking for residents suspected of being members of the local resistance forces.

“I can’t even explain how cruel they are,” he said. “Whenever they come, they just arrest whoever they see. So now everyone flees when they come.”

COVID-19 is adding to the farmers’ woes. Positivity rates have dropped from 37 percent in late July to 6 percent in mid-October, but the virus continues to spread. Healthcare delivery has been severely constrained since the coup; only about 15 percent of the population have received a COVID-19 vaccine dose – well below rates in most other countries in the region.

Labourers are falling ill, said Yin, an office worker from a farming family in southern Mandalay Region, which forms part of the Dry Zone.

“A lot of people said they came down with the flu but the illness sounds very similar to COVID-19 because people were losing their sense of smell,” she said.

“In our villages, planting is still being done by hand, so it was really difficult for farmers to hire people, and it means you cannot finish preparing the land or planting in time,” she added.

The rising food insecurity and poverty in the Delta and Dry Zone could have far-reaching repercussions in Myanmar, which has a largely rural population and relies heavily on the agricultural sector, said the development worker.

“That critical support and focus on the environment has fallen off the radar,” the development worker said.

“I would ask aid agencies to not abandon Myanmar at this time, even though it might be tempting since it is such a difficult operating environment,” she added.