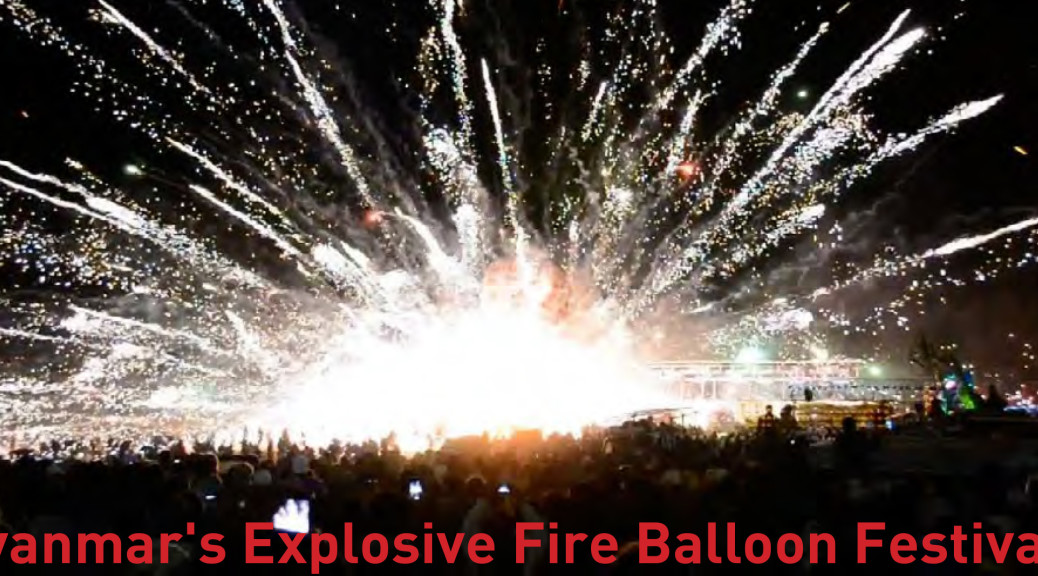 The Taunggyi Fire Balloon Festival sets the skies of central
Myanmar ablaze every year. These celebrations are a part of
Tazaungdaing Festival of Light which is celebrated in November each year to mark the end of Myanmar’s rainy season. It is without doubt one of the most beautiful fireworks celebrations in the world and also the most dangerous.Brightly colored balloons with hundreds of homemade fireworks woven into their frames were sent soaring into the night sky, showering down cascades of sparks onto adoring crowds.These balloons are loaded with explosives and they regularly crash to the ground. It causes panic among the crowds but visitors still stay because they believe that’s the sight is worth the risks.

People travel to the capital of Shan state from various parts of
Myanmar and even from various parts of the world to watch these
celebrations. The tradition of this way of celebrating is rooted in
Buddhism but the hot air balloon contest itself was started by British colonialists in the late 19th century. So, many people are present that it looks like a whole sea of people. Many first timers are amazed and say that they have never seen so many people at one place before. It is really scary when the fireworks fly right at you and sometimes people die too. In 2014, three people were killed when a balloon crashed onto spectators below. A young child also died when a balloon was blown into the family’s tent.Balloon work hard for months to create the most brilliant spectacle of light in order to
win the contest and then they see all their work explode and disappear in minutes.

Besides fireworks and spectacular balloons this festival offers various other exciting experiences as well. Here you can witness a human powered ferris wheel at the festival’s fairground where workers scamper across the 50-foot high rickety structure like spider monkeys, using their body weight to send it spinning around at extraordinary speed. Some of them dangle from the bars as the ride hurtles toward the ground, while some others swing between the bars upside down as the wheel turns.