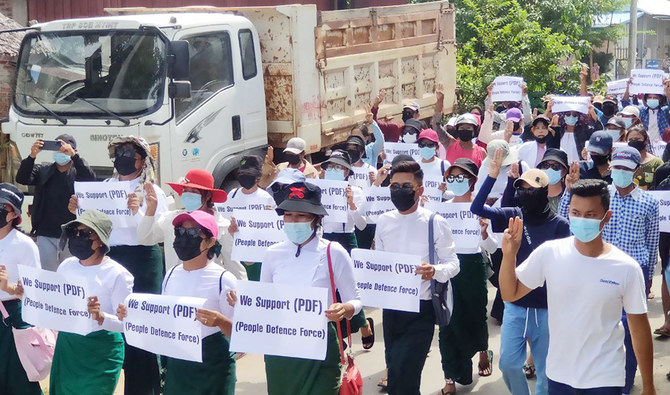 Self-defense groups set up across country in wake of attacks, arrests, night raids by military

YANGON: A newly formed armed militia under Myanmar’s shadow government is gaining the support of community self-defense groups and ethnic armies against the military junta that seized control of the country more than three months ago.

Since the coup on Feb. 1, the junta has killed at least 772 civilians during nationwide protests against the army takeover and violence.

The National Unity Government (NUG), the shadow government of former lawmakers of Aung San Suu Kyi’s National League for Democracy (NLD) who were ousted by the junta, announced on Wednesday the formation of the People’s Defense Force (PDF), a precursor to the planned Federal Union Army that would bring together all groups involved in armed resistance.

The move has already been welcomed by community self-defense groups which have emerged throughout the country in the wake of constant attacks, arrests, and night raids by the military.

Zayar Win, from one of the self-defense groups in Yangon, told Arab News that in Myanmar’s largest city alone, there would be many hundreds or even thousands of people ready to take up arms.

“They are linked with each other but require leadership. With PDF leadership, I think a strong force would quickly emerge. As long as the regime is in power, there will be endless suffering of people. So, taking the military dictatorship to an end is the first priority,” he said.

Working as a construction engineer in Yangon, he used to operate a philanthropic organization that helped vulnerable groups when the coronavirus disease (COVID-19) pandemic hit the country. In April, the organization stopped its charity work and focused on supporting and fundraising for the anti-junta resistance, including those that produced explosives to attack the military.

“Sadly, we have postponed helping poor people, and shifted our focus to supporting those who are fighting the military,” he added.

Many of the civilians engaged in self-defense groups have been trained by militants from the country’s ethnic groups which also oppose the junta regime.

The Karen National Union (KNU), the oldest insurgent group fighting for the greater autonomy of the eastern Karen State that borders Thailand, and the Kachin Independence Army in the northern Kachin State and northeastern Shan State that border China, have been active supporters of anti-junta resistance.

The KNU provides military training and shelter to hundreds of dissidents and protesters who have fled army persecution.

“There are many hundreds of people receiving combat training here,” a spokesperson for the KNU’s Brigade 5 told Arab News on Thursday. “There were also many people who finished training here and returned to their places of origin waiting for this moment. The PDF would be growing very fast.”

While ethnic groups support the formation of the PDF, it is not yet clear if all of them would be willing to fight under one banner, as although opposed to the current regime, ethnic minorities do not entirely trust the shadow government whose members had alienated them when they were in power.

The KNU, however, might be willing to join the fight against the common enemy, the Tatmadaw — the armed forces of Myanmar. Since late March, the group has killed more than 200 government troops in a series of clashes.

But KNU secretary-general, Saw Kwe Htoo Win, on Friday told Arab News: “There are still many issues we have to make clear before making the decision.”

In one ethnic state the decision has already been taken.

Members of the Chinland Defense Force (CDF), who with home-made rifles recently killed dozens of military personnel in the mountainous Chin State bordering India, said they would join the PDF.

“We welcome the formation of the PDF, and we would cooperate with them in fighting against the regime’s forces,” a CDF spokesman told Arab News.

He said that they would also engage with the Federal Union Army when it was formed.

“We, Chin people, just want a peaceful life. Once the revolution is over, we will return to our farmland,” he added.