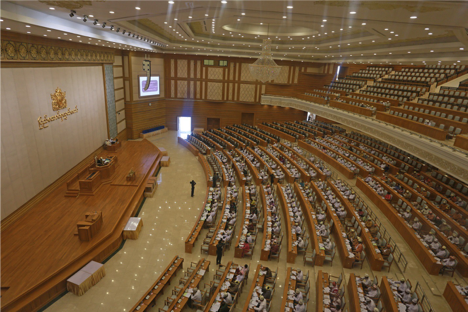 Myanmar has been awarded the “Country of the Year 2015” Award by “The Economist” magazine and we fully support this decision. Our magazine “Myanmar Matters” was started years ago with the belief that Myanmar has great potential and one day soon it will be able to do full justice to its capabilities of transitioning through “change”. We ‘believed’ in Myanmar because we know how resilient and enlightened the people of Myanmar are, and time has proven us right.  Every single step that Myanmar is taking from the last few years is in the right direction. Not only is it moving towards becoming a full democracy, but along with that it is also showing incredible improvement in the human rights conditions while growing tremendously in terms of economic development at the same time.

In the last few years, Myanmar has taken such significant strides that it seems almost unbelievable. Until five years ago, this country did not have a democratically elected government. During that time, Aung San Suu Kyi, the opposition leader and the protagonist for the cause of democracy in Myanmar spent years under house arrest and even her pictures were banned from newspapers. But, all that now seems like a distant past as National League of Democracy (Miss Suu Kyi’s party) won the election by a huge margin, as it gained whooping 77% of the votes. The army is also to be praised for showing its willingness to share power and allowing such free and fair elections to be held.

The team behind the “Country of the Year” Awards has shown that it chooses its winner very carefully. They prove that they have both their head and heart in the right place as they do not take shallow reasons into consideration. In fact, the factors that they take into consideration are meaningful and the ones that have an actual positive impact on the world. They do not base their decision on which country has been the popular or has had been able to attract eyeballs and the most headlines on news channels. The award is given to recognize and honor the country that has made significant contributions towards making this world a better place.

Russia has been in the news during 2015 but mostly for reasons such as domestic oppression and military adventurism. On the other side, China provided more freedom to its citizens by relaxing the one-child policy and allowing its citizens to now have up to two children. The United States of America has also been in the news for some good reasons including restoring diplomatic ties with Cuba and reaching a nuclear agreement with Iran. Nigeria saw history being made when for the first time an incumbent president was rejected peacefully through elections. A lot of more significant events occurred at various places throughout the world, but the country which deservedly won “Country of the Year 2015” Award is Myanmar.

The present Myanmar may still not be a complete democracy but is surely moving in the right direction. Such a huge transition in such a short span of time seems unimaginable but Myanmar has made it possible. For this very reason, Myanmar has been rightly awarded the prize and we congratulate this great Nation for this achievement. We would also like to take this opportunity to wish each and every citizen of Myanmar as well as all of our readers a Merry Christmas and a very Happy New Year.