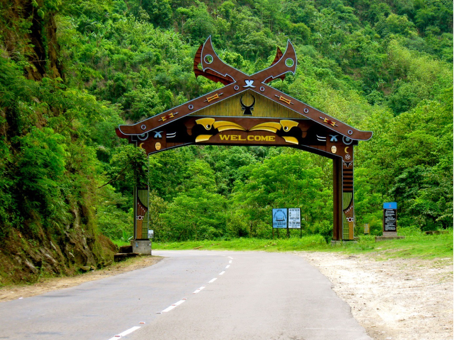 The North Eastern region of India comprising of the seven sister states has much in common with the neighboring countries of Myanmar, Bhutan, and Bangladesh. The people living in the Indian states of Arunachal Pradesh, Assam, Meghalaya, Manipur, Mizoram, Nagaland, and Tripura might be separated from their counterparts living in the aforementioned countries by international boundaries but the similarities between them are striking. The whole region itself is very similar geographically as the terrain and climate are very much alike. In terms of ethnicity and culture too North East India can be said to be an extension of South East Asia. The race of the people, their way of living, and even their eating habits are inherently congruent.

Despite the political boundaries that divide this region, in a way it is essentially a single unit and it has to be seen in that light. As all the involved authorities are realizing, the development of this region can only take place through mutual cooperation. Creating the right conditions in the form a free trade zone in the region can enable all involved parties to progress rapidly. India’s North Eastern states share 5339 Kms of International borders with the neighboring countries. On the other hand, these states are connected to mainland India through a narrow strip of land called the Siliguri corridor which is only 22 Kms wide at its narrowest point. This has been one of the major deterrents in the progress of this region. However, it is very much possible to change this obstacle into a major strength. If the frontiers are dissolved and a free trade agreement is reached upon between India, Bangladesh, Bhutan, and Myanmar the whole region will be able to move forward as one cohesive unit.  Such an agreement will open up a huge market worth billions for the north eastern states and likewise our neighbors will gain access to India’s booming market as well. There are numerous product and service requirements in these neighboring countries which India can fulfil. Similarly, they have resources and materials which we can export from them. The journeys too will become a lot shorter as the present necessity to take the circuitous Siliguri route for every journey out of and into the North East will be eliminated.

We have started publishing Myanmar Matters with the sole objective of bringing forth the issues concerning the region and highlighting the developments that are taking place here. We seek to bring to attention the various activities taking place in the region in various fields including business, investments, technology, finance, infrastructure, and arts. Additionally, we endeavor to shed light on the traditional heritage and culture of the region along with discussing the current topics concerning the people living here.  In this way, Myanmar Matters echoes the voice of the region. This magazine is a mirror which reflects the very core of the region, portrays the life of its people, and showcases all the developments that are taking place here. Myanmar Matters hopes to contribute in the development of this region by bringing it into the focus of businesses and investors. We hope that, in our own way, we will be able to successfully play a role in the advancement and evolution of this special and beautiful region.