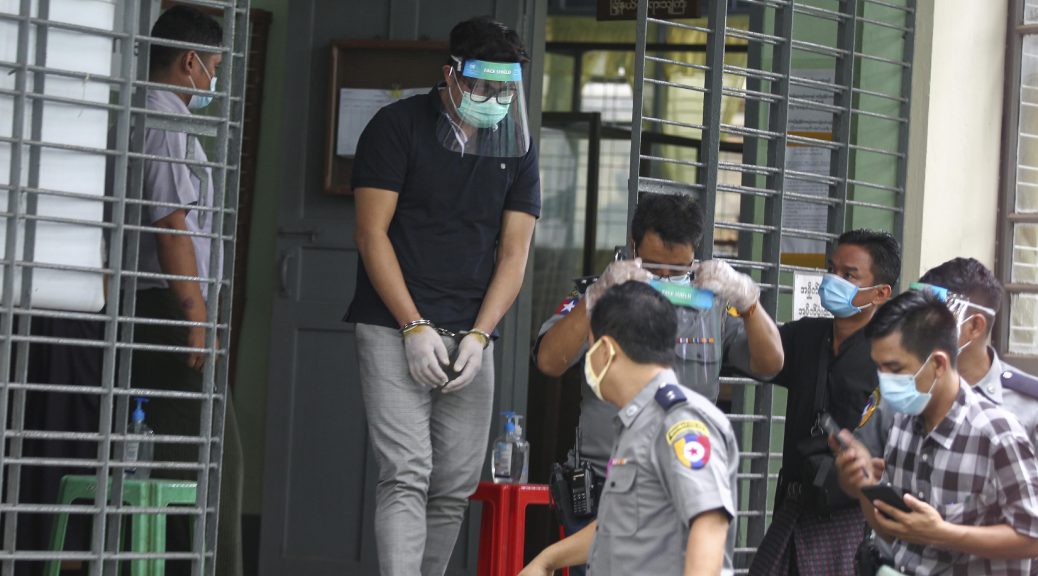 Prison Time for Breaking Curfew, Quarantine Is Excessive and Unsafe

(Bangkok) – At least 500 people, including children, returning migrant workers, and religious minorities, have been sentenced to between one month and one year in prison in Myanmar since late March 2020 for violating curfews, quarantines, or other movement control orders, Human Rights Watch said today. Myanmar authorities should stop jailing people for Covid-19-related infractions.

Most have been sentenced under the National Disaster Management Law, Prevention and Control of Communicable Diseases Law, and various penal code provisions. Authorities have charged hundreds more in cases that are ongoing or resulted in fines. Imprisoning people for violating curfews, quarantine, and physical distancing directives is almost always disproportionate as well as counterproductive for reducing threats to public health.

“Limiting public health risks through social distancing is crucial, but jailing people for being outside at night just adds to everybody’s risk,” said Phil Robertson, deputy Asia director at Human Rights Watch. “Throwing hundreds behind bars in crowded, unhygienic prisons defeats the purpose of containing the spread of Covid-19.”

In March and April, national, state, and local authorities announced several directives and restrictions aimed at reducing the spread of the coronavirus. Measures include a mandatory 28-day quarantine for foreign arrivals, nighttime curfews, a ban on gatherings over five people, and several township-level lockdowns. On March 28, government media announced that “those breaking public health order can face jail time.… The Covid-19 pandemic is also a natural disaster, and those who do not comply with the law can face fines and even prison time.” Local authorities oversee enforcement and criminalization of violations, with wide variations across the country.

International human rights law recognizes that in the context of a serious public health emergency, restrictions on some rights can be justified – but only when those measures are strictly necessary, legal, based on scientific evidence, limited in scope and duration, proportionate to address the crisis, and neither arbitrary nor discriminatory in application. In the cases below, drawn from media and civil society reports, Myanmar authorities acted well beyond the public health threat posed by Covid-19. These cases represent only a small fraction of the government’s use of punitive measures.

Most of those imprisoned were charged for violating curfew orders under section 188 of the penal code, which carries a sentence of up to six months for “disobedience to [an] order duly promulgated by [a] public servant.” The majority of states and regions imposed curfews in late April requiring people to remain in their homes between 10 p.m. and 4 a.m. The government rolled back the nationwide curfew to 12 a.m. to 4 a.m. on May 15.

Authorities arrested 330 people in the border township of Myawaddy, Karen State, between April 20 and May 6 for violating the curfew. At least 50 were sentenced to between two weeks and one month in prison, with the rest fined 50,000 kyat (US$35). Those who could not pay were jailed. In Ayeyarwady Division, authorities sentenced 212 people to between one and two months in prison in April for breaking the regional curfew order. Authorities in Shan State meted out the strictest penalties, sentencing over 20 people to three months in prison for breaking curfew between April 22 and May 4.

Curfew orders are imposed under section 144 of the criminal procedure code, which allows for wide-ranging responses to social conflict or unrest and has long been exploited by security forces to exercise broad de facto emergency powers without oversight. Section 144 should be revised to reduce the scope and scale of its application and increase the threshold for emergency orders, Human Rights Watch said.

People arriving in Myanmar from abroad are required to undergo quarantine for 28 days – 21 in a state facility followed by 7 days of self-quarantine at home. About 61,000 people are currently quarantined in state-run facilities across the country, according to the Ministry of Health and Sports. The majority are migrant workers who have returned from Thailand and China. Border crossings were closed for most of April, but at least 60,000 arrived in March and May.

On April 28, a 15-year-old girl and 16-year-old boy who recently returned from Thailand were sentenced to three months in prison for leaving a state quarantine facility in Mawlamyine after one week. Authorities charged them under section 18 of the Prevention and Control of Communicable Diseases Law, which provides up to six months in prison and a 10,000 kyat fine for “whoever violates the prohibitive or restrictive order issued by the relevant organization or officer.” On April 9, the United Nations children’s agency, UNICEF, urged governments to institute a moratorium on new children entering detention facilities, release all children who can be safely released, and protect the health and well-being of children who must remain in detention.

Sections 26 and 30(a) of the Natural Disaster Management Law have also been used regularly to incarcerate violators of quarantine and physical distancing orders. Section 26 carries a prison term of up to two years for anyone who “interferes, prevents, prohibits, assaults or coerces” a department or official conducting “natural disaster management.” Section 30(a) carries a maximum one-year sentence for failing to comply with a disaster management directive.

The Yinmarbin Township Court sentenced a man in Sagaing Division to one year in prison under section 26 for “being drunk and loitering around” while under state monitoring for possible Covid-19 infection. Another man in Sagaing Division was sentenced to six months under section 30(a) for leaving the Ye-U township hospital while being watched for symptoms. Authorities arrested a married couple when the husband visited his wife at a state facility in Naypyidaw where they were quarantined in separate rooms. On April 20, both were sentenced to six months in prison under section 30(a).

States began issuing bans against gatherings of more than five people in March, with a nationwide ban instituted on April 17. In Sagaing’s Khin-U township, two people were sentenced to six months in prison on April 7 under section 30(a) for holding a charity event in violation of the local order against group gatherings. In Chanmyathazi township, Mandalay, 12 Muslims were sentenced on May 8 to three months in prison under section 30(a) for holding prayers at a house. Two boys arrested with them were detained for a month and a half.

On May 4, six labor rights advocates were sentenced to three months in prison for holding a protest at a factory in Yangon regarding a pay dispute. Authorities broke up the protest and charged the six union leaders and members under the Prevention and Control of Communicable Diseases Law.

The labor union arrests reflect a broader effort by authorities to exploit instability surrounding the coronavirus to further crack down on freedoms of speech and assembly. The government plans to increase its powers to restrict speech with a draft Prevention and Control of Communicable Diseases Bill currently being discussed in parliament, which would provide up to six months in prison for people spreading information about diseases that may “cause panic.” Parliament should revise the bill to remove criminal penalties for peaceful speech, Human Rights Watch said. Parliament should also amend the National Disaster Management Law, Prevention and Control of Communicable Diseases Bill, and related regulations to remove prison sentences for peaceful violations of quarantine, stay-at-home orders, and other emergency directives.

While quarantines and social distancing are a vital part of the public health response to the pandemic, their enforcement should not give rise to new tools of abuse. Instead, the health ministry and state public health departments should facilitate compliance by coordinating inclusive public awareness campaigns; providing people in quarantine with access to health care, including mental health services, and accurate, up-to-date information; and supplying resources such as face masks, food, water, and other essentials to those in need. To the extent possible, the public health force and other relevant civilian authorities, not security forces, should oversee enforcement of quarantines orders.

In its April briefing on Covid-19 and human rights threats, the UN noted that excessive emergency measures ultimately threaten the pandemic response: “Heavy-handed security responses undermine the health response and can exacerbate existing threats to peace and security or create new ones. The best response is one that aims to respond proportionately to immediate threats whilst protecting human rights under the rule of law.”

Locking people up for violating measures such as curfews and quarantine may increase the spread of Covid-19 as people are rotated in and out of crowded detention facilities. In April, Myanmar authorities pardoned about 25,000 prisoners under its annual Buddhist new year amnesty, reducing the overcrowded prison population to just above official capacity. But the remaining population still has inadequate space for effective social distancing. Prisons nationwide are ill-equipped to deal with a coronavirus outbreak, with only 30 doctors and 80 nurses employed across the entire prison system.

“Myanmar did the right thing in releasing thousands of prisoners last month, but jailing regulation violators threatens to undo that progress and put more people in harm’s way,” Robertson said. “The authorities should act to prevent the spread of Covid-19, rather than using the pandemic as a pretext for violating rights.”