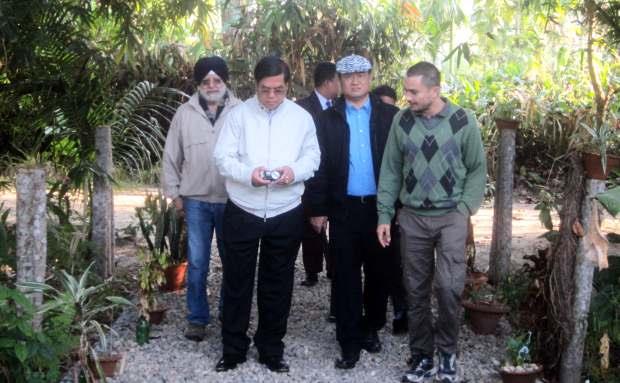 A 12 member delegation from Myanmar led by Chief Minister of Sagaing Region H.E. U Thar Aye and Chief Minister of Kachin State H.E. U Lajon Ngan Sai visited the North Eastern Region of India between the 30th November to 7th December, 2014. Aimed at boosting inter-regional cooperation in Tourism, Education, Transportation & Culture, the visit was yet another milestone in furthering relations between the bordering States of India and Myanmar which will go a long way in establishing greater people-to-people contact, opening new avenues of trade and cultural exchanges thereby bringing peace and co-prosperity to the entire region. The visits of Chief Ministers from the bordering States of Myanmar to the North East India will provide impetus to the further expansion and deepening of India-Myanmar relations.

The visiting Chief Ministers from Myanmar were warmly welcomed by the Nagaland Chief Minister at the inauguration of Hornbill Festival, an annual cultural festival of Nagaland, India on 1st December, 2014. The Festival was inaugurated by Prime Minister of India Shri Narendra Modi. Also present on the occasion were Governor of Nagaland and Ambassador of India to Myanmar H.E. Gautam Mukhopadhaya. On 2nd December, the two Chief Ministers of Sagaing and Kachin were the guest of honour at the festival of Kisama village and were also Chief Guests of Kigwema village stone pulling ceremony.

The Delegation arrived in Guwahati on the 3rd of December where they attended the Business Discussion Session organized by FICCI North East. The theme of the session was on developing business and connectivity opportunities between the North East & Myanmar.

From Guwahati the Delegation moved to the Sonitpur District, where on the way they visited the APPL owned Kellyden Tea Estate and Misa Golf Club. The main purpose of the Delegations trip to Sonitpur was to visit two of the premier Educational Institutions in the region- Tezpur University and Assam Valley School. Besides visiting the campuses of both institutions, the Chief Ministers had open interaction session with faculties and students. The Assam-leg of the Tour was organized and facilitated by the Balipara Foundation and also included a tour of the Balipara Foundation Conservation Center. The Chief Ministers were presented with the Report from the recently concluded International Conference on Asian Elephants, which had strong participation from Myanmar. Furthermore a copy of the recently published book “Reflections on Managing Water” was also handed over.

The two Chief Ministers then traveled to Shillong, Meghalaya State to attend a two day Conference/Seminar on India’s North Eastern States and Eastern Neighbours: Engaging for Connectivity, Culture and Prosperity in Shillong on 5th and 6th December, 2014. The Seminar was organized by the Asian Confluence, Divya Jeevan Foundation in collaboration with Indian Council for World Affairs, Ministry of External Affairs. The Seminar was organized to address the complex and sensitive issues relating to the tremendous role that the civil society can and should play in the development of North Eastern part of India and as India’s land connectivity corridor to the greater economy of the South East and East Asia.

1. What is the strategic importance of India, especially the North East, for Myanmar and viceversa?
The NER connects India to Myanmar and Myanmar connects India to South East Asia. Therefore the strategic importance of both countries to each other is quite obvious. The NER is the geographical gateway through which any meaningful and long-term cooperation will be built around. 2. Does China’s powerful economic presence in Myanmar effect the establishment of Indian companies in the country?
There is ample scope to develop India’s economic and other ties with Myanmar. A number of projects have been commenced, the most important of which – the Kaladan Multi-Modal transport project, which will connect Calcutta with Sittwe port, and the India-Myanmar-Thailand trilateral highway – are still ongoing. Infrastructure at border posts like Moreh-Tamu, which is in dire need of repair, and the bus service between Imphal and Mandalay are still on the drawing board. Indian companies such as Essar, GAIL, and ONGC Videsh Ltd. have invested in Myanmar’s energy sector. Tata Motors has set up a heavy turbo-truck assembly plant. Myanmar imports only three per cent of
its total imports from India and there is substantial scope for India to diversify the trade basket.

3. Is Prime Minister Modi’s recent visit to Myanmar a positive step towards Indo – Myanmar investment opportunities and how?
As Prime Minister Narendra Modi and Myanmarese President Thein Sein met at Nay Pyi Taw, the big focus of discussions was improving connectivity between what they called “brother countries.” The Modi government brings in a renewed push to India’s Look East policy with an “Act East” policy. Needless to say, greater trade and commerce, tourism, people-to-people contacts depend on improved and easy connectivity.

4. What could be Myanmar’s role in bolstering India’s Look East Policy?
As Myanmar opens up to the outside world, India can aid it immensely in nurturing its nascent democracy. Following up on the many recent diplomatic visits, the two neighbours have a historic opportunity to come close to each other once again and transform their bilateral relations. Myanmar is rich in natural resources, and consistent and long-standing cooperation with India will help it develop its true potential. For India, cooperation with Myanmar will help transform the North-East, bolster its LEP, and help it emerge as a major Asian power.