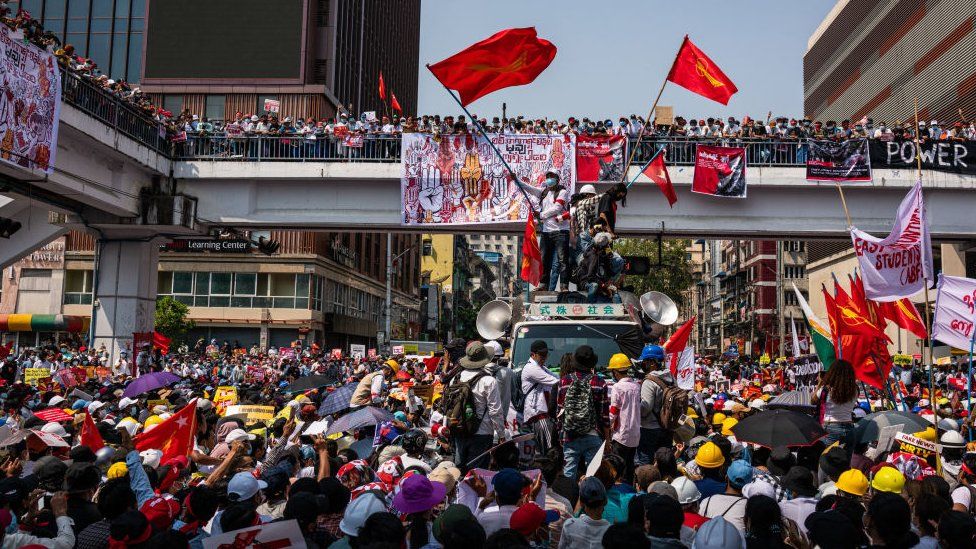 A high-end office block in Myanmar linked to the country’s military leaders is seeing an exodus of international organisations.

Coca-Cola, the World Bank and McKinsey have told the BBC they have moved out or are reviewing their leases at the Sule Square complex in Yangon.

The United Nations said the complex was built on land owned by the military.

It has been 100 days since the early morning coup, sparking mass protests across the country in which hundreds have died.

However, even before they took power on 1 February, Myanmar’s military – which initially ruled the country for almost half a century after seizing power in 1962 – owned large areas of land and controlled companies involved in everything from mining to banking.

The land on which the building stands was leased from the military, according to a 2019 United Nations fact-finding mission report.

Last month, activist group Justice for Myanmar called on 18 tenants of the complex of offices and shops in the heart of Myanmar’s commercial hub Yangon to stop indirectly supporting the army.

“Sule Square has big-name tenants that continue to lease office space in the building, indirectly supporting the army,” Justice for Myanmar said in a report.

According to news agency Reuters, six of the companies have said they have moved out or were reviewing their plans, but only one mentioned the military link. Other firms cited various reasons, including business prospects.

In a statement via email, Coca-Cola told the BBC that it would not renew its lease when it ends in the middle of next month due to “changing business requirements”.

“Our office-based employees at Coca-Cola Limited (Myanmar) will continue to work from home for the rest of 2021 as part of overall safety measures. We will be communicating our new office location at a later date,” it added.

In a statement sent to the BBC, consultancy McKinsey & Company said: “We no longer have space in a serviced office leased in Sule Square. We terminated our lease in early 2021.”

Reuters said it is not currently using its Sule Square office and was reviewing its tenancy.

A spokesperson for the World Bank Group, which also has an office in the complex, told the BBC that it was “assessing the situation in Myanmar, according to internal policies and procedures”.

Norway’s state-owned telecoms operator Telenor said it had known that the military owned the land Sule Square is built on before it moved in but it had picked the location due to a number of reasons, including safety. Telenor has not said whether or not it plans to move out of the building.

Sule Square, which is close to the historic Sule Pagoda in Yangon, opened in 2017. It was developed by a local affiliate of Hong Kong listed Shangri-La Asia, which also manages the building and a neighbouring hotel.