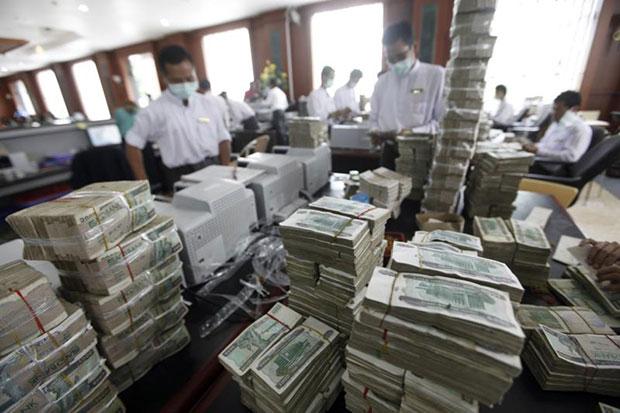 The Central Bank of Myanmar is urging government organisations to only use kyat payments to reduce US dollar demand and prevent dollarisation of the economy.

The Foreign Exchange Management Department of the bank last week announced that the kyat only should be used in domestic payments at national, regional and state-level organisations, the Myanmar Times reported on Wednesday.

The document aiming to prevent widespread government use of the dollar was one of several measures put out by the central bank on May 29. A separate document also limited US dollar withdrawals from a domestic bank account to US$10,000 a week for all people or institutions except for a few bodies such as international NGOs, embassies and United Nations organisations.

Mya Than, chair of the Yangon Foreign Exchange Committee, said the necessity of using foreign currency for local payments tends to make exchange rate fluctuations worse. Some people speculate by buying lots of dollars or withdrawing massive amounts from their accounts that they do not actually need.

“Those people sell outside formal institutions and strengthen the informal market, so the Central Bank is protecting against that habit,” he said.

The kyat has lost about 6% against the dollar so far this year, according to the bank’s official reference rate. If the market rate is used for calculations, the depreciation of the kyat is closer to 10%.

Several different government departments have been known to demand payments US dollars from local companies. Sailors or car importers must often make their tax payments to government accounts in US dollars rather than kyat, for instance.

While government use of the greenback has been tapering off from 2011, many hotels, restaurants and jewellery shops, particularly in tourist areas, still list their prices in US dollars.

Businesspeople say it is important to preserve use of the US dollar at private businesses.

Than Maung, owner of a jewellery shop in Yangon and an executive member of the Myanmar Gems and Jewellery Entrepreneurs Association, said nearly every jewellery shop takes a friendly stance toward dollar payments by cash or card to serve foreign customers.

Win Mar, owner of a separate jewellery shop, said kyat payments are not convenient for purchases of jewellery, as often pieces get expensive and require a large mass of notes.

“The kyat is not compact. Whatever foreign currency buyers use, we accept it and then enter a value in kyat on the receipt,” she said.

Others say they prefer kyat payments, but must be able to meet customer demand.

“We just prioritise the convenience of our customers. Sometimes even if they pay in dollar we give them an advantageous rate of 1,000 kyat, even though the official rate may be closer to 1,100 kyat,” she said.