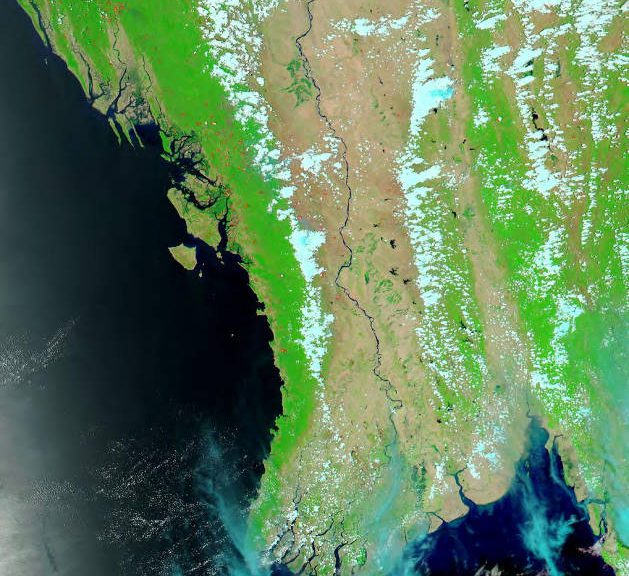 With talks about climate change and sustainable development doing the round these days, the entire global fraternity is bearing the brunt of it and Myanmar is not left alone. With nearly 75% of the country’s population depending on agriculture, threats of water shortages, drought, heat waves etc, could easily take a toll on the livelihoods of people. The country’s anatomy is peculiarly shaped in the form of a kite with a long tail that runs south along the Malay Peninsula. It is also the northernmost country in the Southeast Asian region with China situated towards the north and northeast and India to the northwest. However, the country is not untouched by the damaging effects of the changing climate and fears of the worsening environment. According to the recent Asian Development Bank (ADB) report released earlier this year, climate change could prove to be disastrous for Asia, especially for Myanmar. President Trump’s appalling decision to withdraw support from the Paris Agreement, it may appear to have caused massive repercussions on the Asian dream of curbing emissions. However, with China taking a positive stance to press ahead with emissions reduction, countries like Myanmar hope to get some positive encouragement and assistance. The report produced by the ADB and the Potsdam Institute for Climate Impact Research (PIK) makes for grim reading, should the predictions eventuate. Under a “business as usual” scenario, a 6 degree Celsius temperature rise is projected over the Asian landmass by the end of the century, with an increase as high as 8 degrees C forecasted in Afghanistan, Pakistan, Tajikistan, and northwest China. “These increases in temperature would lead to drastic changes in the region’s weather system, agriculture and fisheries sectors, land and marine biodiversity, domestic and regional security, trade, urban development, migration, and health. Such a scenario may even pose an existential threat to some countries in the region and crush any hope of achieving sustainable and inclusive development,” the report said. In addition to this, according to the 2016 Climate Risk Index, Myanmar is the second-most vulnerable country in the world to the effects of climate change. According to the latest projections, Myanmar faces more extreme weather events as temperatures rise: more cyclones, more storms, more floods and more droughts. Before 2000, cyclones made landfall along Myanmar’s coast once every three years. Since the turn of the century, cyclones have made landfall every year.

In spite of this, the picture is not that bleak. The plethora of economic opportunities offered to the Asian countries, specifically Myanmar, is headed by a ‘firming recovery’ in the form of major industrial economies and the government’s continued reforms. As per the Myanmar Climate Change Alliance (MCCA), a joint initiative of the UN-Habitat and UNEP, Myanmar is one the fewest countries in the LDCs who take climate change seriously, especially when it comes to adaptation. Climate change is a reality which needs to be addressed urgently and Myanmar is doing relatively well in this regard. To take the issue in an optimistic manner, the country’s economy is expected to accelerate at around 7.7% in 2017 and to 8.0% in 2018, while the current account deficit will widen the imports, growing faster than the exports. The recent government effort in strengthening the legal and regulatory framework has also helped in enhancing the conducive environment for private businesses and investments, which will, in turn, drive further economic growth. Consolidating the country’s legal and regulatory framework is crucial to develop a vibrant private sector and tap Myanmar’s huge growth potential, the report says.

The link between economic opportunity and climate change is something that has to be given immediate attention by the Asian countries, especially Myanmar. The job of reducing greenhouse gas emissions by subsiding the global temperature to below 1.5 degrees Celsius is undoubtedly a herculean task but it would result in various opportunities for the international community. According to various reports released by leading media agencies, Asia has already become a leader in clean energy investment, with the lead was taken by China investing humongously in renewable energy. This raises the question of funding for climate adaptation and mitigation efforts. Myanmar is already receiving external assistance from a couple of entities, such as Global Environment Facility, the EU, and bilateral development partners. It is also said that the country will have access to future funding through the Green Climate Fund, which distributes the annual $100 billion contributions made by advanced economies, agreed at COP21 in Paris last year. The country also offers a plethora of opportunities for investors, stakeholders and private sector involvement. Vast natural gas deposits, innumerable suitable locations for hydropower generation, and unexplored potential for solar and wind power generation are some of the key areas which would definitely attract investment in the coming years. In this regard, Myanmar’s power sector puts forward a plethora of opportunities to both foreign and local investors. According to the government reports, the installation of considerable additional capacity to the current 4,422 MW as well as the rapid construction of transmission lines are national priorities. In order to reach the objective of full national electrification until 2030, the power sector of Myanmar needs to evolve and develop in an efficient manner. The participation of both public and private sector is essential in this regard. It could also be stated that the country needs to build an effective mitigation strategy which involves not only the state but also contributions from the non-state actors, in order to procure finance and maintain coordination, at the time of financial drip.

However, the recent shift in geopolitical trends with the prominence gained by emerging economies, like China, India and Brazil certainly provides a positive push to Myanmar for constructing their economy in a sustainable way.