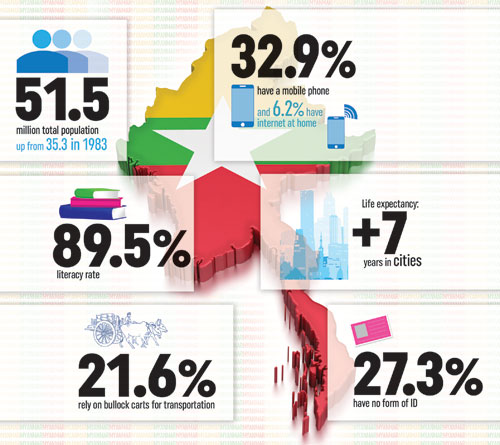 More people in Myanmar have mobile phones than use electricity to light their homes, many more rely on bullock carts than possess cars or vans, and there is still a serious deficit of toilets and potable water. These are these are some of the striking – and useful – findings that emerge in the 2014 census, depicting a country of extreme differences and pronounced rural-urban variations. “One unique feature of a census is its ability to provide information down to the lowest administrative level. Such information is vital for planning and evidence-based decision making at every level,” the Ministry of Immigration and Population said in its report which was published online.

The ministry commended the UN Population Fund and international donors for their technical expertise and their financial assistance in the census, which is estimated to have cost about US$60 million.

That equates to just over $1 a head for a country that has determined its population at 51.5 million people – well up from 35.3 million at the time of the last census in 1983, but fewer than the 57 million the government had estimated to exist, partly due to a declining birth rate. In addition there are just over 2 million Myanmar living abroad, mostly of working age, of whom 70 percent are in Thailand.

A breakdown of the population pyramid showed a narrower base in the 0-9 years age group than in 1983, highlighting the effect of declining birth rates since the previous census was conducted.

“On the other hand, the proportion of young people is growing and the emerging youth bulge creates favourable conditions for a demographic dividend in Myanmar,” the ministry said.

The average fertility rate for women living from 15 to at least 49 years is 2.3 children, a figure close to the Southeast Asian average.

Life expectancy is among the lowest in the region, however. Men live an average of 63.9 years, while women live six years longer, for a nation average of 66.8 years. There is a stark rural-urban divide, however, with those in cities living on average nearly seven years longer.

Magwe and Ayeyarwady regions had the lowest life expectancy of 60.6 and 61 years respectively. Those two regions also had the highest under-5 mortality rates, at 108 and 105 deaths per 1000 live births respectively – more than twice the rate in Yangon. The national average is 72.

The national literacy rate compares well with the wider region, at 89.5pc of the population, below the rate of 93.5pc in Thailand but well above 62.8pc in India. About 80pc of Myanmar 10-year-olds attend school – a number considerably higher than previous estimates – but this falls to just over 40pc by the age of 15.

The 277-page report contains a wealth of valuable detail not just for economic planners but also the private sector. Revealing the complexities of collecting the data, a striking 27.3pc of people had no form of identification, yet house ownership stands at 86pc of the population.

It is revealed that 32.9pc of people have a mobile telephone, while just 3.5pc have a computer and 6.2pc have internet at home. A television is available for 49.5pc of the nation, and radio 35.5pc.

For transport only 3.1pc have a car, van or truck, while 38.7pc have a motorbike, and 21.6pc rely on a cart and bullock. Only 32.4pc of households use electricity for lighting – but only 12pc in Rakhine State and Ayeyarwady Region – while 81pc cook with wood or charcoal.

Just over half of all houses are made with bamboo walls, while 61.5pc have corrugated sheeting for roofs.

Just over 30pc of the population use what is defined as “unimproved water sources”. The main source of drinking water for urban households is water purifiers or bottled water (31.3pc).