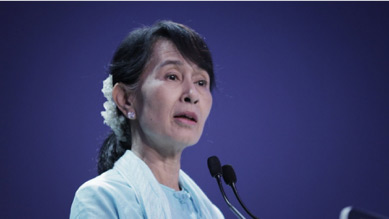 Myanmar’s Foreign Affairs Minister and State Counselor Ms. Aung San Suu Kyi embarked on her first official trip after holding office as she left for Laos on May 6, 2016. Ms. Suu Kyi wasn’t alone in this trip and Myanmar’s new President Mr. Htin Kyaw was also with her. This trip was initiated by an invitation extended by Laos President Mr. Bounnhang Vorachit. Mr. Vorachit assumed his role as the President of Laos just three weeks ago and Mr. Kyaw has become the first head of a state to be hosted by him. The main aim of this visit was to strengthen relations and cooperation between Myanmar and Laos. The possibility of starting flights between the two countries and other areas of common interest were also discussed.