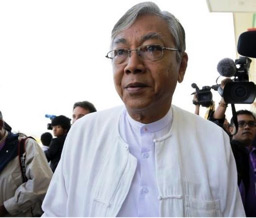 On March 15, 2016 Myanmar got its first democratically elected president in over 50 years. As this country transitions from military rule towards becoming a full-fledged democracy, the 70-year-old Mr. Htin Kyaw, will receive the honor of becoming the next leader of Myanmar. Mr. Kyaw has been the long time close friend and trusted confidant of Ms. Aung San Suu Kyi.

Ms. Suu Kyi would have been the most natural and the first choice for becoming Myanmar’s next President but she could not contest for the seat as a clause in Myanmar’s constitution prevents her from doing so. Besides Mr. Kyaw, two other candidates who contested for becoming the next President of this country were Mr. Myint Swe and Mr. Henry Van Tio. Mr. Van Tio is also from the same party as Mr. Kyaw- The National League of Democracy while Mr. Swe was the army’s candidate.

A total of 652 ballots were cast out of which Mr. Henry Van Tio won 79 votes and Mr. Myint Swe won 213 votes. Mr. Htin Kyaw comfortably won the President seat by securing 360 votes and he will take office on April 1, 2016. Mr. Swe and Mr. Van Tio will take up the posts of the first and the second vice president respectively.