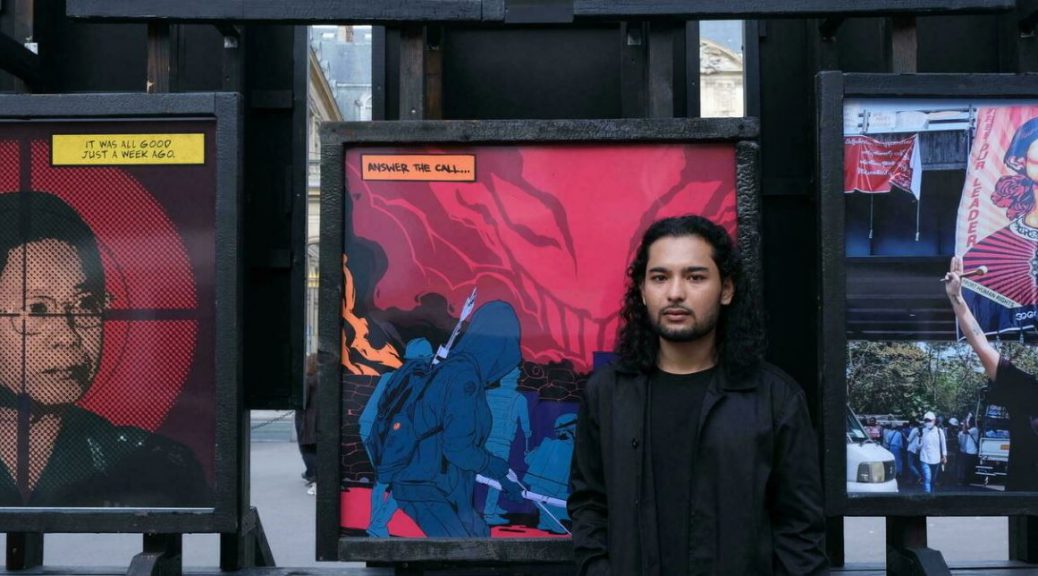 A new Paris exhibition is shining a light on seven artists using their work to resist Myanmar’s military junta. FRANCE 24 interviewed Bart Was Not Here, one of the artists featured.

“I’m not an activist, I’m an artist,” says Bart Was Not Here, categorically rejecting being portrayed as a political dissident. However, since the army’s coup in Myanmar on February 1 this year, the 25-year-old artist has been using his art to campaign against the country’s military junta.

He is one of seven Burmese artists whose work is on display at the Place du Palais-Royal in Paris, as part of the exhibition Fighting Fear: #WhatsHappeningInMyanmar, organised by the international NGO Human Rights Watch and running from September 18 until October 17.

Just a few steps from the Louvre, the month-long exhibition shows a series of works created in response to the political situation in Myanmar. Bart Was Not Here’s colourful paintings are displayed alongside photographs of the demonstrations that erupted after the army took power. Pop art’s influence on his work is clear, with a political bent: they mock the religious extremist monk Wirathu, released from prison earlier this month by the junta; the former president Thein Sein; as well as leaders from the country’s intelligence services.

“I made some of them before the coup d’état,” Bart Was Not Here told FRANCE 24 in an interview the day before the exhibition’s opening. “But now I think the satirical pieces are more important than ever. They show that I’m not scared of the military, I’m not scared of mocking them or humiliating them. What’s the worst that could happen? They could kill me,” he says with a simple shrug.

“I don’t consider myself as an artist-activist,” he insists. “For me, it doesn’t matter what happens – art comes before everything.”

Before the coup, Bart Was Not Here painted in his studio in Yangon, Myanmar’s economic capital, with his girlfriend, a florist, who worked alongside him. The self-described jack of all trades had just started experimenting with sculpture. The rest of the time, he was working on a series of drawings called ‘The God Complex’.

“I wanted to depict the world that I imagined inside a genie’s lamp,” he says. “Far from politics…”

‘I’d never produced so much work as in this period’

The day before the coup, the artist was working on an immense mural artwork with a friend.

“We were supposed to paint the façade of a factory in Yangon,” he remembers. “It should have taken about two days. On January 31, we went to bed, happy, thinking that we’d finish it off the next day, chatting over a barbecue.”

But the mural was never completed.

“When we woke up, the internet was blocked, the television was down and the radio just played the same headache-inducing traditional music over and over. We immediately realised that something was wrong.”

In the days that followed, Bart Was Not Here joined the massive peaceful protests that filled the streets of Yangon. When doctors, teachers and workers went on strike, he decided to use his art as protest.

“I’d never produced as much work as during this period,” he laughs. “What can I say: it was inspiring! I wasn’t making my usual art, but at the time it just felt natural to me and the right thing to be doing.”

Every day, with dozens of other artists, he would sit near the start of protest marches and, with pens and paintbrushes at the ready, would paint protest signs. His series ‘The God Complex’ and his sculptures were abandoned in favour of painting the three-finger sign – a symbol of peaceful resistance – over and over, slogans and drawings of the protests. His goal was to motivate and inspire the people making up this new civil disobedience movement.

In the evenings, he continued to draw, creating digital illustrations to be shared online. One of them went viral – a simple graffiti tag saying ‘Disobey’ on a red background.

“This period brought about a real explosion of creativity for young protesters,” Phil Robertson, the Asia programme director for Human Rights Watch tells FRANCE 24. “Art was really a major tool in the resistance to the coup. It was a way for protesters to express themselves and the messages they were all rallying behind.”

But after several weeks, the military junta’s violent repression of protests transformed the peaceful gatherings into urban warfare. More than 6,500 people have been arrested since February 1, and 1,108 people have been killed, according to the daily count kept by the Assistance Association for Political Prisoners in Myanmar.

“Artists, just like journalists, directors and other public figures, are the first to be targeted by the military. It makes sense, because the military wants to silence anyone who it considers to be leaders of the civil disobedience movement,” explains Robertson. “Many have had to go into hiding, while others have fled to Thailand. Some of the lucky ones have been able to go abroad.”

A number of celebrities in Myanmar’s culture sector have been arrested over the past few months, particularly those in the film industry, like the actor and producer Lu Min, the director Christina Kyi and the actor and model Paing Takhon, all of whom are openly against the junta.

Four poets have been killed, among them K Za Win, who was killed with a gunshot to the head at the beginning of March. A few days after the coup, he had published a poem titled ‘Revolution’ that was widely shared and which ended with this verse: “It will be dawn/For it is the duty of those who dare/To conquer the dark and usher in the light.”

Bart Was Not Here says that he himself wasn’t specifically targeted by soldiers, but he spoke about the atmosphere of fear that filled the streets of Yangon before he left.

“One day, the police came and blocked off my road for no apparent reason before firing off real bullets, aiming at no one. We found a bullet lodged in my mother’s car.”

Bart Was Not Here says that it wasn’t the violence and political instability in Yangon that made him leave.

“I was originally supposed to leave Myanmar in 2020 to go to the US where my sister lives,” he explains. “But then I couldn’t because of Covid-19.”

Instead, in March he applied to join an artists’ residence in the Cité des Arts in Paris: “When the opportunity of the artists residence in France came up, I jumped at the chance.”

He arrived in June, and since then has been trying to adapt to his new life in France. But while FRANCE 24 is talking to him, his phone almost never stops lighting up with a new message from a family member, friend or acquaintance back in Myanmar, a constant eternal reminder of what is still going on back home.

“Sometimes, I’ll be walking around, thrilled to be exploring this city and all of the opportunities that it offers. And then a message will remind me of the ongoing violence in Myanmar. In moments like that, it’s hard not to feel guilty for having left,” he admits. “But despite that, I still think I can be more useful here. I can work non-stop, while staying safe.”

The artist hopes that he will sell more work here, the proceeds from which will go to help the resistance movement in Myanmar.

“I was born under a dictatorship and then I experienced democracy. It wasn’t all perfect with Aung San Suu Kyi, far from it, but at least the future was bright,” he says. “We had hope. Now we have to fight so we don’t fall back into the darkness.”