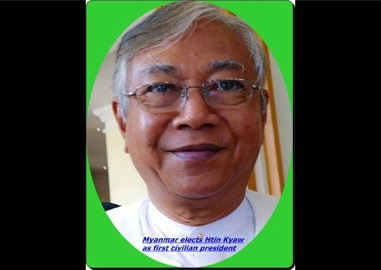 After the historic Myanmar elections which took place on November 8, 2015 Myanmar was waiting for its new President. National League for Democracy (NLD) was sure to win but who will become the next President was not clear as the most popular choice Ms. Aung San Suu Kyi was not eligible to hold that post due a stricture in Myanmar’s constitution. On 10 March 2016, Ms. Aung San Suu Kyi proposed the name of Mr. Htin Kyaw for the post of the President. He was to compete against army backed Mr. Myint Swe and another member of his own party Mr. Henry Van Thio. His spotless reputation along with Ms. Suu Kyi’s support enabled him to win the parliamentary voting process easily. In this way, Myanmar got its first civilian President in over 50 years on 30 March 2016. He replaced previous President Mr. Thein Sein who held this post for a period of five years from March 30, 2011 to March 30, 2016.

Mr. Htin Kyaw has been actively involved in Myanmar’s struggle for independence for the last many decades. However, his name was not known to many people as he mainly worked behind the scenes by supporting Ms. Suu Kyi in every way possible. Mr. Kyaw was born in Yangon, to Mr. Min Thu Wun and Ms. Kyi Kyi. His father Mr. Min Thu Wun was a respected author and poet. He did his schooling from English Methodist High School and then completed M. Econ. in statistics from Rangoon Institute of Economics. While pursuing his Master’s degree he also started working as a teacher and after his degree was completed, he joined University Computer Centre as a programmer/system analyst. He won a scholarship from Institute of Computer Science, University of London in 1971 and spent two years there furthering his studies in the field of computer science. After this he continues his studies at Asia Electronics Union, Tokyo and then attended a course at the Arthur D. Little School of Management in Cambridge, Massachusetts.

After completing his studies Mr. Kyaw returned to Myanmar and joined the Ministry of Industry 2 as a Deputy Division Chief in 1975.  He became the Deputy Director in the Foreign Economic Relations Department, Ministry of Planning and Treasury in 1980 but he resigned from his post in 1992 to join Ms. Suu Kyi’s struggle to make Myanmar a democratic country. Since then he did took some non-Government posts but alongside he was continuously fighting alongside Ms. Suu Kyi and fully supporting her mission. The 69 year old Mr. Kyaw has been a friend to Ms. Suu Kyi from childhood and is respected in NLD as a good man with unshakable integrity. Being a close friend and a trusted confidant to Ms. Suu Kyi he is certain to work harmoniously along with her and help her to make her vision for Myanmar a reality. U.S. President Mr. Barrack Obama US President Barack Obama welcomed this development and congratulated both Mr.  Htin Kyaw and Ms. Aung San Suu Kyi, He called it a historic step forward for Myanmar and also assured that Myanmar’s new Government will get complete support from the American Government.