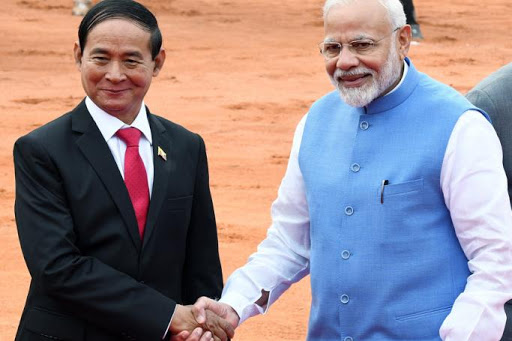 Countries like Myanmar are treading cautiously even as China is pushing several infrastructure projects, including its ambitious Belt and Road Initiative (BRI), in Southeast Asia. The ongoing border standoff with China seems to have offered India an opportunity to further strengthen its economic and military ties with its eastern neighbour. ​

In a major boost to the Narendra Modi government’s Act East policy, India and Myanmar have agreed to operationalise the strategic Sittwe port in Rakhine state early next year, and initiate steps to complete India-Myanmar-Thailand trilateral highways. The flagship policy aims to strengthen India’s relations with the Asia Pacific region.

The move assumes significance in the context of China’s growing footprints in South and Southeast Asia. China is also aggressively pursuing what is known as its “debt-trap diplomacy” in India’s neighbourhood and beyond, in order to extract economic and political concessions from the borrowing countries when they are unable to repay the loans.

For instance, Sri Lanka’s Hambantota port is widely cited as a classic case of China’s predatory lending practice. It is believed that the island nation had to hand over the port to China after being unable to pay off its loans issued to construct the project.

However, countries like Myanmar are treading cautiously even as China is pushing several infrastructure projects, including its ambitious Belt and Road Initiative (BRI), in Southeast Asia. The ongoing border standoff with China seems to have offered India an opportunity to further strengthen its economic and military ties with its eastern neighbour. India’s proposal to invest $6 billion to set up an oil refinery near Yangon is a step in that direction.

Both sides agreed to operationalise the Sittwe port on the Bay of Bengal in the first quarter of 2021. Sittwe is India’s answer to the Chinese-funded Kyaukphyu port in Rakhine under its BRI, which is intended to cement China’s geostrategic footprint in the state, reports The Irrawaddy, one of Myanmar’s leading publications.

The deep-water port, which was constructed with India’s assistance, is part of the $484-million Kaladan Multi Modal Transit Transport Project. The latter is expected to create a sea, river and road corridor for cargo shipment from Kolkata to Mizoram through Sittwe port and Paletwa inland water terminal in Myanmar’s Chin state.

The Kaladan project that was initiated by the Congress-led United Progressive Alliance government in 2008 under its ‘Look East’ (now Act East) policy received a fresh push after the Modi government took over in 2014. However, the road component – an 87-km highway connecting Lawngtlai in south Mizoram with Zorinpui on the India-Myanmar border – has missed several deadlines.

The outlawed Arakan Army (AA), which is fighting against Myanmar’s Tatmadaw or military in Rakhine state – the epicentre of the 2018 Rohingya crisis – has put a spanner in the works. Designated as a terrorist organisation, the AA wants India to pay “taxes” to continue work in the Kaladan project. Last year, AA rebels had abducted some Indians engaged in the project and later released them.

New Delhi and Naypyidaw also discussed progress on other ongoing Indian-assisted infrastructure projects such as the India-Myanmar-Thailand trilateral highways connecting landlocked Northeast with Southeast Asia, according to the MEA statement.

The road project has its share of controversy though. In August, the Supreme Court had allowed the Modi government to continue the construction work of the highway project despite a dispute over the contract between the government and a construction firm.

India has undertaken two projects in Myanmar under the 1,360-km highway project that starts from Moreh in India to Mae Sot in Thailand through Myanmar, external affairs minister S Jaishankar said in a letter to Rajya Sabha member from Assam, Birendra Prasad Baishya, in response to his query over the status of the project.

These are construction of the 120-km Kalewa-Yagyi road sections to highway standard and upgrading of 69 bridges and approach roads on the Tamu-Kyigone-Kalewa (TKK) road section of 150 km, the minister said.

Apart from these big bang projects, India is slowly, but steadily making inroads into the mineral-rich Kachin state where the Kachin Independence Army (KIA) has been at war with the Myanmar army since a ceasefire pact collapsed in 2011. The visiting Indian delegation attended the virtual inauguration of the Centre of Excellence in Software Development and Training (CESDT) in Myitkyina, the capital of Kachin state. CESDT was set up under the ASEAN-India Cooperation Fund.

Kachin in northern Myanmar, which is located next to China’s Yunnan province, has seen massive Chinese investments in mining, infrastructure and industrial projects in recent years. India could in no way match China’s economic prowess. And, experts say, New Delhi’s interests in Kachin seem to be guided more by strategic reasons than economic ones.

The Kachin rebels can “generate critical intelligence for India” in the event of full-scale military hostilities with China in the eastern sector and “may even empower India’s so-called ‘Tibet card’,” according to Avinash Paliwal, associate professor, International Relations, SOAS, University of London.

“Equally, it can help generate access for Indian security officials with the Arakan Army, which is challenging the Tatmadaw in Rakhine State and has considerable influence on the ground to shape the success or failure of the Kaladan MMT project,” Paliwal wrote in an article.