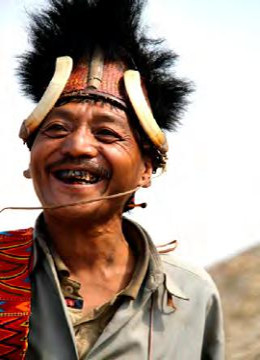 The state of Nagaland in India is home to a wondrous phenomenon that one would rarely see anywhere else in the world. In this state lies a village called Longwa which has a house that can be considered to spread over two countries – India and Myanmar. Towards Myanmar, this house falls in the Mon state as the boundary between India and Myanmar passes across this village and divides this house into two parts which fall into two parts. This house is owned by the hereditary chief or the king of the Konyak Naga tribe known as “The Angh”. The Angh of Longwa village has 60 wives and he rules over more than 70 villages extended up to Myanmar.

The people living in this village move freely between India and Myanmar and do not need a visa. Even one of the sons of this village’s chief has joined the army of Myanmar. So, technically these villagers have dual citizenship for both India and Myanmar. Besides the chief, some other Konyak families have their kitchen in Myanmar while they sleep in India. The Konyak tribe, which lives in Longwa village, holds the largest numbers among the sixteen officially recognized tribes in Nagaland. The Konyak Naga speaks the Tibetan-Myanmarese dialect with every village having a self-modified version. Some people speak another version too which is known as the Nagamese language and is a mixture of Naga and Assamese.

The Konyak tribe is very famous for their tattooed inked faces and they always wear some traditional jewelry. Most of the men wear a brass skull necklace and they still use hornbill beaks, elephant tusks, horns, and skulls to decorate their houses. The arrival of Christianmissionaries has somewhat helped to bring the people living in this region closer to each other. The religion has now become the cohesive bond between the Nagas and has helped them to refrain from constant fighting with each other.

In the village of Longwa, there is a feeling of oneness among people and boundaries between two different countries seem to have dissolved. The emotional connect between the Nagas living on both sides of the border is very strong. We all know that boundaries were not created by God but are a human intervention. This village shows that it is possible to create a world where boundaries do not create any conflict. This is a very important lesson that we can learn from Longwa village.