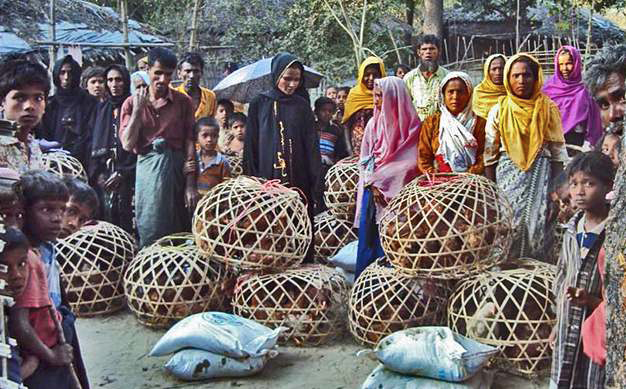 Land is often the most significant asset of most rural families. Approximately 70 percent of Myanmar’s population lives in rural areas and is engaged with agriculture and related activities. Many farmers use land communally under a customary land tenure system, especially in upland areas inhabited by ethnic minorities. Customary use and ownership of land is a widespread and longstanding practice.

The field assessments confirmed what is evident from secondary research that for the vast majority of the Myanmar population dependent on access to land for livelihoods, where land is taken, even with monetary compensation, the impacts on an adequate standard of living can be significant. The compensatory system is often not keeping up with rapidly escalating land prices, meaning displaced farmers being unable to acquire new land in nearby areas.

Another revealing aspect at hand was the challenges of landlessness and food insecurity faced by the rural population in Myanmar. They continue to remain at risk of land confiscation surmounting to an estimated 25 percent of farmers becoming landless agricultural labourers in Myanmar, making them food insecure, in particular when food prices increase.

The Government of Myanmar itself recognizes landlessness as a major problem in its Framework for Economic and Social Reforms (FESR) and states that landlessness in the country was at 26% in 2005, with even higher levels in Yangon (39%), Ayeyarwady (33%), and Bago (41%) Regions, the so-called “rice bowl” of Myanmar.

The need of the hour therefore is reform of land policy and law in Myanmar, which to this day remains incomplete. There is a recognized need in Myanmar for a written comprehensive land use policy.

In July 2012, a cabinet level committee was established known as the Land Allotment and Utilization Scrutiny Committee, with a remit to focus on national land-use policy, land use planning, and allocation of land for investment that will allow it to better balance competing demands for land-use that will inevitably increase with further economic development and investment. The land regime in Myanmar is characterized by a patchwork of new and old laws that leads to overlap, contradiction and confusion. Aworking group of the Committee, which includes civil society representation and external experts, is currently formulating a draft land policy. The final policy is not expected to reach Parliament until mid-2015 or early 2016. Once adopted, the policy will presumably guide the drafting of an overarching land law.

Insecurity of tenure is another major problem. Moreover, the land registration system is considered inefficient, with complex requirements and lack of benefits for registering land. UN Habitat recently announced new cooperation with the Government of Myanmar on the implementation of a land administration and management programme. The land mapping system is weak, which further exacerbates the problem of land disputes, as land classifications and mapping may overlap or not reflect true land use patterns. For example, one map may classify a plot of land as forest land, whereas another map may classify the same plot as farmland, leading to confusion about land use rights and possible disputes about whether the land can be sold or not, depending on the classification. Participatory land use planning is needed that balances the needs of all land users.

The current government’s handling of land disputes will set a precedent for how future Myanmar administrations are likely to address the legacies of cronyism, abuse, and lawlessness dating back to the former military regime. Besides devising a working legal framework for the future, the government needs to address issues of land claims predating the Thein Sein government in a manner deemed fair by the public. The extent to which legislators and officials are able to address land reforms and tackle land disputes will be one of the most important tests for the reformist government and President Thein Sein.