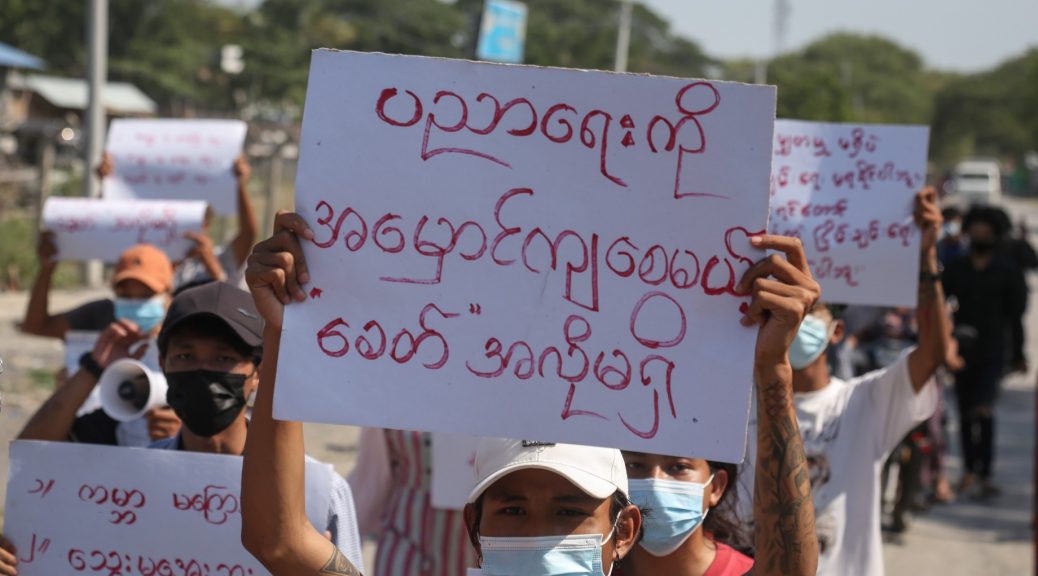 Striking teachers dismiss a plan to reopen schools as an attempt to normalise military rule, and  vow to continue their resistance to the junta

The military council is reportedly planning to reopen primary, middle and high schools as early as November despite continued threats of Covid-19 and ongoing teacher strikes and student boycotts in accordance with the Civil Disobedience Movement (CDM) aimed at toppling the junta.

Due to the Covid-19 pandemic, most schools were already closed at the time of Myanmar’s February 1 military coup. The junta attempted to reopen them nationwide on June 1, the start of Myanmar’s academic year, but more than half of the country’s 400,000 teachers were on strike and just 10 percent of the estimated 9 million students nationwide opted to enrol. More than 100 striking teachers have also been charged under the Penal Code’s Section 505a for incitement, according to the Myanmar Teachers’ Federation.

Those schools that did reopen in June were later closed again on July 9 when the third wave of the pandemic hit the country.

However, a photo of a military council notice in Ayeyarwady Region’s Yegyi Township has recently gone viral online instructing the township education officer to prepare the schools to reopen in November.

While an official date for reopening has not been announced, the junta’s information team alluded on Wednesday that such an event was approaching but had been obstructed by anti-coup entities.

They accused “political extremist members and supporters” of the National League for Democracy, the National Unity Government and the Committee Representing the Pyidaungsu Hluttaw of committing arson in schools, inciting violence, and threatening education staff into joining the CDM “while officials made preparations for the reopening of schools.”

A spokesperson from the strike committee of a union for basic education staff—and a striking teacher himself—said his group is against any move by the military to reopen schools, and dismiss it as an attempt by the generals to normalise military administration.

As the people’s resistance war against the military and the “revolutionary momentum” continues to gain strength, he said that neither he nor his colleagues could break away from the movement.

“It is just impossible for us to become non-CDM [staff] again because we have stayed strong even under their rigorous oppression. In this current situation, we don’t care if they reopen schools—we will continue our resistance,” he said.

Presumably in connection with the reopening of schools, the military council also declared on its newspaper on Wednesday that it was launching a nationwide Covid-19 vaccination program through October 25 for students over the age of 12 using the Chinese-manufactured Sinovac. However, they provided details only for how those vaccines would be administered in the capital, Naypyitaw.

Education staff across the country confirmed to Myanmar Now that they had been told the same announcement by local junta authorities that school would open following the vaccination scheme.

Vaccination rates are low among adults, with rates unknown except for statistics released by the junta’s health department on Tuesday suggesting that just 4.2 million of Myanmar’s more than 50 million people have received two doses of any jab.

Khant Lu Aung, the father of a high school student from Mandalay who would be eligible for re-enrolment and vaccination, said he did not send his son back to school after the military seized power and would continue to keep him out of the junta’s education system.

“Under a dictatorship, I am not interested in whether the schools open or close. Even if they are really going to reopen, I won’t let my kid go there. Under their rule, whether it is healthcare or education, nothing is reliable,” Khant Lu Aung told Myanmar Now.

Nilar Win, a primary school teacher taking part in the CDM who chose not to reveal her location for security reasons, told Myanmar Now she was concerned about the safety of possibly bringing students back to school next month, given the health crisis and the ongoing instability in the country.

“It is very questionable that they are reopening schools for the children’s well-being,” she said, adding that the junta has even talked to teachers about “squeezing two school years into one” to make up for learning time lost during the pandemic.

Teaching modules are typically divided into 36 weeks of lessons, she explained, adding that no information had been shared with teachers about the upcoming curriculum.

Khant Lu Aung told Myanmar Now that he had prepared for his child to study some academic subjects online during the current school year but that he did not have a long-term plan for their education amid the unrest.

Myanmar Now tried to contact executive director of the junta’s education department Ko Lay Win to comment on the planned reopening of schools, but the calls went unanswered.