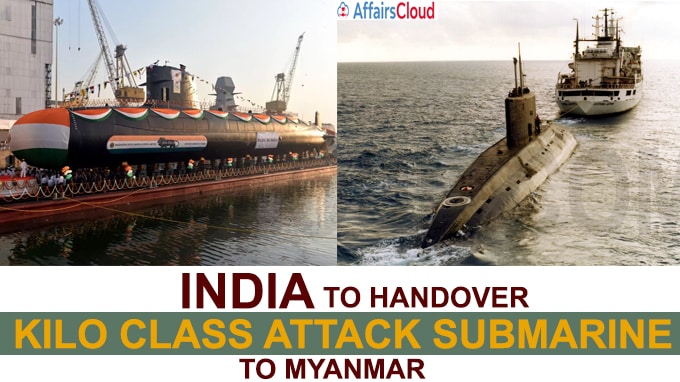 Move in line with vision that aspires to guarantee security for all maritime partners, says MEA

India will hand over INS Sindhuvir, a Kilo class submarine to the Myanmar Navy, the Ministry of External Affairs announced on Thursday. Addressing the weekly press interaction, official spokesperson of MEA Anurag Srivastava said this will be the first submarine of the Southeast Asian country and the move is in line with the overall Indian vision that aspires to guarantee security for all maritime partners.

“In this context, India will be delivering a Kilo class submarine INS Sindhuvir to the Myanmar Navy. We understand that this will be the first submarine of the Myanmar Navy. This is in accordance with our vision of SAGAR — Security and Growth for All in the Region, and also in line with our commitment to build capacities and self-reliance in all our neighbouring countries,” said Mr. Srivastava to a question.

It belongs to a class of diesel-electric attack submarines built by the Soviet Union during the Cold War years.

The submarine will be the first in a fleet that Myanmar wishes to build and is likely to be used initially for training and orientation purposes for its Navy personnel. Last year, India supplied Myanmar ‘Shyena’ advanced light torpedoes as part of a defence deal. The October 4-5 visit of Mr. Shringla and General Naravane was also noteworthy as Myanmar and Bangladesh have recently engaged in a war of words over heightened military tension near the border at Chittagong regarding the Rohingya issue.

India’s military outreach to Myanmar is important as it comes in the backdrop of the ongoing military tension along the Line of Actual Control in Eastern Ladakh between India and China, a leading industrial and business partner of the Southeast Asian state.