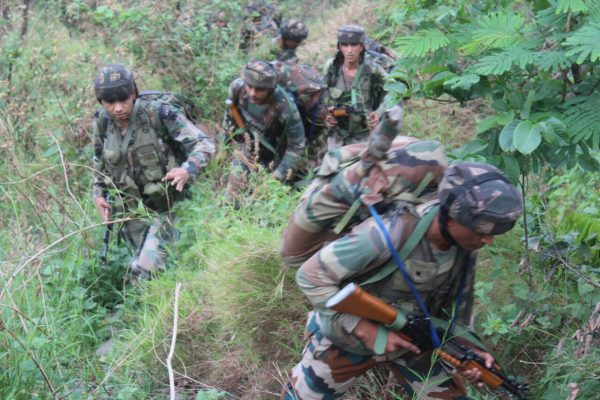 The ambush came amid a reshuffling of the Naga separatist movement in Myanmar.

Indian security forces have been put on high alert along the country’s border with Myanmar following another ambush by separatist rebels that killed three personnel of a paramilitary outfit.

An official said that “vulnerable spots” along the border in India’s Northeast have been identified and “area domination exercises” launched to prevent further attacks by the rebel groups.

In Nagaland’s Mon and Tuensang, which had been a hotbed of militancy for the past several decades, additional deployment of troops have been observed by residents in the district headquarters.

On July 29, a joint squad of three Myanmar-based separatist groups from India’s Northeast ambushed a patrolling party of Assam Rifles on the border at Sajik Tampak in Manipur’s Chandel district. A press release issued by these outfits claimed that four personnel were killed in the attack as part of the campaign against India’s “colonization” of western Southeast Asia.

Chandel has been one of the most vulnerable zones along the 1,643 kilometer long India-Myanmar border. In 2015, as many as 18 soldiers of the Indian army were killed in an ambush carried out jointly by the separatist outfits.

Across Chandel in Myanmar are at least two big camps belonging to the People’s Liberation Army (Manipur) and United National Liberation Front, which serve as a launching pad for the attacks against the Indian security forces. Both the outfits hail from Manipur’s Imphal Valley and have close ties with other separatist groups in the region.

The release mentions the involvement of a new outfit, the Manipur Naga People’s Front (MPNF), in the recent attack, fueling speculation among the Indian security agencies about new linkages that might have emerged among the groups and whether it was linked to the division in the Naga separatist movement in Myanmar.

The ambush on July 29 was preceded by two developments in Myanmar’s Naga inhabited region which is contiguous to India’s Northeast. The Khaplang faction of the National Socialist Council of Nagaland (NSCN-K) suffered its second split in less than two years when a faction led by Niki Sumi expelled chairman Yung Aung.ADVERTISEMENT

A release cited Aung’s decision to change the official seal and his attempts to “clandestinely” establish ties with the Isak-Muivah faction of NSCN (NSCN-IM), which operates out of India’s Northeast, as the reasons for his expulsion from the outfit.

Predictably, Aung reacted by expelling Sumi and two senior functionaries from the organization on charges of convening “illegal meetings,” misappropriation of funds, encouraging “divisive policies,” and failing to report in the council headquarters after being summoned.

The entire outcome of these developments may be too early to gauge but the split will certainly weaken the separatist movement in Myanmar’s Naga inhabited zone. The unity that former chairman S. S. Khaplang had assiduously maintained could be difficult to sustain given the myriad tribes in the region. While Aung is a Pangmi Naga, Niki Sumi hails from the Sumi tribe in Nagaland and he has the support of some senior leaders from the Konyak Naga region in Myanmar.

Adding to the complexities were reports last month that the Tatmadaw, Myanmar’s military, has deployed additional columns of the army in the remote hilly regions of Sagaing Division along the border with India. There was speculation that another offensive would be launched against the NSCN(K)’s stronghold to flush out rebels belonging to United Liberation Front of Asom (Independent) from Assam in northeast India.

All the camps of the separatist outfits from India’s Northeast were dismantled in a raid last year at Taga. Several functionaries from many groups were jailed and later handed over to India. However, no operations were launched this time around and the army reportedly returned to its barracks after a couple of weeks.

An Indian government official explained that the additional deployment was triggered following Tatmadaw’s receipt of reports that a large group of the NSCN(IM) would shift base to certain locations in Myanmar’s Sagaing Division. Earlier, there had been a spate of reports in the media claiming that the NSCN(IM) had already transferred a large chunk of its weapons and cadres to camps in Myanmar from its camps in India’s Northeast.

NSCN(IM) has been engaged in a peace process with the Indian government since 1997 with the objective to reach a negotiated settlement. A “Framework Agreement” clinched in 2015 between the two sides raised the hope of an agreement, but the process has been stuck over the demands of a separate flag and constitution by the Naga group, which is unacceptable to the government.

In the last couple of months, government troops have also launched a crackdown against the outfit resulting in some encounters as well. The NSCN(IM) has accused the government of putting the peace peace in “cold storage” and it has blamed the interlocutor and Nagaland governor R. N. Ravi for the delay.