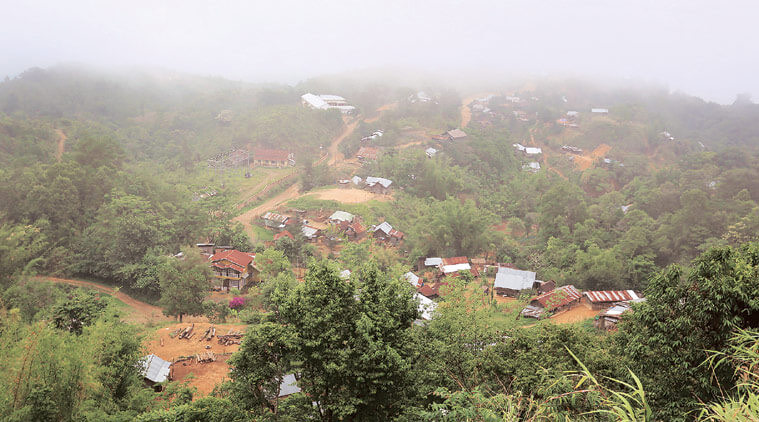 Very little has changed in this corner of Ukhrul district in Manipur. Bordering Myanmar, the group of volatile villages in the district’s Chassad subdivision has for decades been a hub of militant activity. With no fence defining the border, the villages of Chassad, Kamjong, Grihang, Ningchao, Nampisha, Phaikoh, Chrokhurnao and Aishi serve as a thoroughfare for militants as well as villagers. The link between Ukhrul’s villagers and their Myanmarese counterparts is centuries old. Villagers on both sides engage in a flourishing barter trade. “The trade for us is now mainly of wood — prized Burmese teak. In exchange we give them whatever they need — blankets, sewing machines, bicycles,’’ says Chihanphang Keishing of the Tangkhul Naga village of Kamjong.

Kamjong has historically been a stage for war. During the Second World War, in their attempt to capture India, the Japanese had made Kamjong their Indian headquarters. Chihanphang Keishing’s father, Ringshi Keishing, was a leader in Netaji Bose’s Indian National Army. “My father went to Burma and brought the Japanese. He was their guide to Manipur. He escorted them to Kohima,’’ says Keishing, adding the roads today are only marginally better since that war. It’s easier to go to Myanmar than to some parts of Manipur. Until recently, the villagers would procure even salt or clothes from the other side of the border. The villages are packed between steep hills and thick forests. An elephant will occasionally stray in from Myanmar and be hunted down by villagers for meat. The treacherous terrain makes the area ideal for insurgent camps, many of these a stone’s throw away on the Myanmar side.

But while this area is predominantly Naga, it’s the Meitei valley’s underground groups that hold sway here, primarily UNLF, while MNRF, the Manipur Naga Revolutionary Front, is the other outfit with a significant presence, thanks to its thriving extortion rackets. Last year, an ambush at the village of Konkram by UNLF killed two civilians. Aishi, 1.5 km from the Myanmarese village of Molvailuk, is a meeting point for many insurgents and UNLF cadre members are known to visit there frequently to gather information about the Indian Army. In the 2012 Manipur assembly elections, a CRPF convoy was ambushed and attacked by insurgents. “Each of these villages has seen ambushes and attacks. The insurgents have specifically targeted Indian security forces. They have declared that their target is not the Manipur police but if they find Manipur police accompanying the Assam Rifles, they will attack them too,” says a senior government official in Ukhrul.

Two months ago, the Kuki village of Chorokhurnao became a bone of contention between India and Myanmar. Villagers had left several years earlier due to alleged harassment by the Myanmarese army. Two months ago, they came back to resettle but were chased away. The issue is now being resolved through diplomatic channels, says a government official. It is this village that is most frequently used by Meitei underground groups to enter India, attack and then retreat into Myanmar. Kamjong village authority head S D Thomas says violence aside, Kamjong and its surrounding villages are victims of the conflict. “There is an SDO’s office here but the SDO is never there. There is one small hospital but instead of the sanctioned seven doctors, there are only two. The teachers who are supposed to be posted here have sublet their jobs to locals who may or may not be qualified to teach. The government officials who are posted here never come; they are afraid as this region is a known haven of insurgents,” he says. Thomas says government schemes such as NREGS and PMGSY rarely take off and, even if they do, the projects are never completed because of the amount paid to militant groups from these schemes as extortion.

This is true of the rest of Manipur too but the threat here is more potent, with the militants camped at their doorstep. “It’s a vicious cycle. Development does not take place here because of the insurgency. But it’s the lack of development and road connectivity that has lent such favourable conditions to the insurgents. And India is so far away. As far as India is concerned, we don’t even exist,” says Thomas. It’s a similar disenfranchisement with India that has earned sympathy for UG groups in the Kuki village of Phaikoh, close to where the Indian Army retaliation against insurgents took place.

“Electricity came to our village in 2005. We have had three years of electricity since. There are no medical facilities. And there is no pharmacy. We go to Myanmar and buy medicines. We get no rations, no funds for roads or any assistance from the state government. We don’t depend on India at all. We depend on Myanmar,” says Phaikoh “minister” Hemkhoshei. So when UNLF comes and holds “medical camps’’ in the village, bringing their in-house doctor, or distribute medicines in this malaria-infested area, they are more than welcome. “They talk of development, which is more than our state government has ever done for us,’’adds Hemkhoshei.